Student exchanges not enough for BRICS to study together 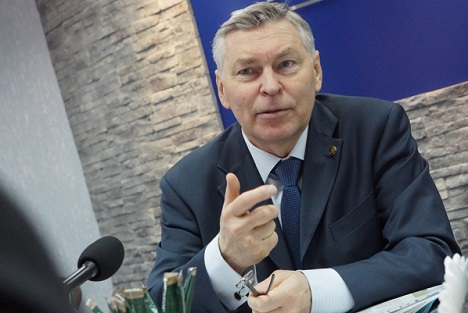 In an interview coinciding with the BRICS and SCO summits at Ufa, Vladimir Filippov, Rector of the Peoples' Friendship University, speaks of how BRICS nations can cooperate in the sphere of higher education and the possibility of a BRICS University. Filipov, also Chairman of the Russian education ministry’s Higher Attestation Commission, doctor of physical and mathematical sciences, and Professor, Russian Academy of Education said, while English is the medium of communication in BRICS, it can foster greater awareness of language skills.

Vladimir, tell us about the main areas of cooperation between the BRICS countries in the field of education?

“The leaders of our countries have chosen a strategy of cooperation in many directions and in many areas, so now it is up to our system of higher education to provide all these areas with staff. We need to train staff who will understand the specifics, trends and challenges in each of these areas.

At the same time, our countries need to find more effective mechanisms for cooperation than the usual student exchange. One of such mechanisms is the networking among higher education institutions through which we are training specialists by the programs, jointly developed and agreed upon by the universities of the partner countries. This is most effectively done at the graduate level with a two-year learning period. During the first year students will study at the foreign university, and during the second year they study to obtain a master's degree at the University in their native country. As a result, they receive two diplomas, but they are more motivated to stay in their home countries after graduation.

Such forms of cooperation have already been activated on the basis of People's Friendship University in the framework of the SCO University network, which today includes 80 universities and the CIS Network University uniting 26 universities.”

There have been talks for years about the creation of the BRICS Network University on a similar basis. When will this project take shape?

The idea of ​​establishing such a university was launched by the Russian Minister of Education and Science Dmitry Livanov, in 2013 at the meeting of Education Ministers of the BRICS countries in Paris. It was supported by all the participating Ministers of Education.Since then, several conferences have been held at the ministerial level; the work is being carried out at the highest level.

On the other hand, it is important that the initiative also comes from below, directly from the universities. Work at this level is ahead of schedule; we have already started to prepare bilateral agreements on double degrees with universities of BRICS countries.

It is important to identify the areas in which joint programs will be created, as well as principles of trust between the universities, because we are talking about the issue and recognition of two diplomas. Universities should determine who they trust, what should be the criteria of selection of the universities. In the case of the BRICS, it will be of major importance to create a network of elite universities.

Who and what determines the criteria by which certain universities will become part of the Network University?

Decisions on the criteria should be taken at the level of the Ministries of Education in the framing of agreements, but they should surely be based on the suggestions of the university community. And this is the work that is underway.

Let me note the importance of the internationalization of universities. If we want to use terms such as "export of educational services," the things that be exported are usually the best ones. Therefore, in this case, the interaction with partner universities motivates both the heads of universities and teachers who need to maintain a certain level in order to launch joint programs with other universities. Today not any master's program of Peoples' Friendship University is worthy to be offered to other universities, so it is an extra motivation for improvement.

Moreover, today, the internationalization of universities has reached the level when the university's priority is not only to teach foreign students, but to train their own students to work anywhere in the world, to gradually adapt them to work in the global economy. This is a much more important task for each university in our countries.

Speaking of internationalization, this brings up the question of language. The BRICS involves five different languages, so what language should BRICS use to communicate?

English became the language of intercultural communication, and this should be accepted. Although, of course, many countries, including European countries, are concerned about preserving their own languages. The only solution here is to demonstrate the benefits of knowing many languages.

For example, our graduate, now the Prime Minister of Kazakhstan Karim Masimov, speaks Russian, Kazakh, English, French, Spanish, Arabic and Chinese. Knowledge of a foreign language is advantageous, and countries should raise interest for their languages and create incentive mechanisms to study them.

One of the objectives of cooperation within BRICS is to popularize the idea - especially among the students - that learning a foreign language other than English will benefit their future career.

For science, for business, languages like Chinese, Russian, Spanish, in addition to English, is an advantage. We need to move on to understanding that the English language has become an additional means of communication, but graduates who speak the languages ​​of the BRICS countries have an advantage. And for the cooperation between our countries it is important that the future students of bilateral programs speak the language of the country where they will study, and not just English.

In the Russian universities, for example, virtually all programs, even bilateral, are taught in Russian. This is what we have achieved: to convince the students, or rather, to select those students who understand that the language is an additional advantage.

As for the rankings, though not the last thing that is considered in education, what is the current position of The Peoples' Friendship University of Russia? Is the establishment of BRICS university ranking being considered?

Perhaps we should think of creating such rankings. In the meantime, our country is subject to worldwide QS rankings. We realize that the global approach uses broad criteria that do not take into account the unique features of our countries. Of course, BRICS own ratings would allow to assess more objectively the educational institutions of the BRICS countries, which number about 7,000.

In the QS rating among the BRICS countries, our University is in the top 100, while in the national rankings The Peoples' Friendship University of Russia is traditionally in the 5th-6th place.

What is the dynamics of the flow of students from the BRICS to Russia, and vice versa?

So far more students come from BRICS to Russia than Russian students in all BRICS countries together. The majority of all students coming from the BRICS countries are Chinese. Among all foreign students who come to Russia from over 170 countries of the world, the biggest student community is from Kazakhstan, followed by China. Far fewer students come from Brazil, India, South Africa, although three decades ago, for instance, Indians were in the first place among all foreign students in Russia. Back then the Soviet Union had no relations with China, and there were no Chinese students at all.

I want to underline that all countries that are part of BRICS today and that cooperate in the field of education, have their own very ambitious education programs, which are actively financed by the governments. So, in China, there are special funds to attract foreign students, for which Chinese universities began to create more programs in English. Brazil also put forward an ambitious program to train 100,000 people abroad in the coming years. Russia also has a scholarship program: it involves the issuance of over 15,000 free scholarships for foreigners per year.

Earlier, you mentioned target training. Do you plan to collaborate with large businesses operating in sectors for which universities prepare specialists?

Such cooperation already exists. For example, the People's Friendship University graduate Dr. Raghav Singh today is sponsoring a number of areas. He invested in the creation of the Institute of Oriental Medicine based in our university. Another of our graduates, Sudhir Gupta (by the way, both of them are the graduates of the Faculty of Agriculture) is the co-owner of the tyre holding Amtel-Vredestein.

These business tycoons annually allocate 100 thousand dollars for student scholarships. These are targeted scholarships, which are distributed among the students on a competitive basis.

Entrepreneurs are interested to support the areas which are in demand in terms of the specifics of their business. For example, some Indian businessmen are working in the field of mineral exploration in Latin America. They are investing in our students so that they specialize in a particular area during their masters course and go to work in their business after graduating.

Pharmacy is a field where many of our graduates work in India, and set the same targets. Being aware of the need to know the specifics of the Russian pharmacy, they are ready to invest in the new specialists, who major in these studies in our University.

In your opinion, how do ordinary people, the citizens of our countries, perceive the idea of ​​the BRICS?

If at first BRICS seemed more of a political idea, today everyone understands and says that if in the framework of BRICS cooperation will be interlinked in many areas, if we grow to depend on each other in many areas, then BRICS will become a very promising union. At the same time it is obvious that real cooperation between our countries will strengthen when our countries will have many graduates from BRICS-member partner countries. Only real people can strengthen such cooperation.