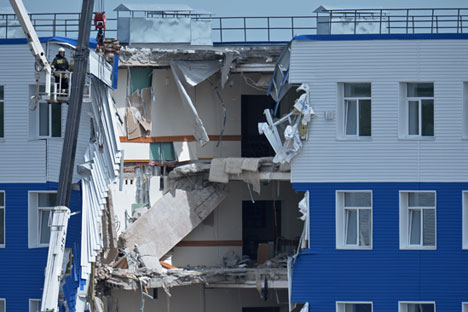 One section of the barracks in the training centre of the Airborne Forces in Omsk collapsed the evening of July 12. Source: Alexey Malgavko/RIA Novosti

Three buildings have collapsed in Russia over the past few days; facades of apartment buildings came crashing down in Perm and Yaroslavl and, in Omsk, a military barrack collapsed, killing 23 soldiers resting inside. The total number of victims has now reached 25. Experts believe the buildings are crumbling because planning designs have been violated during construction or repairs and due to inadequate government attention.

The series of building collapses began with an apartment building in Perm, a city in the Urals, where a building of 1950s vintage came crashing down on July 11. Falling rubble killed two of the building’s occupants, while one person was hospitalized. According to investigators, the cause of the collapse was the weakening of the building’s load-bearing structures, which could have been the fault of the company managing the building. A similar incident occurred on July 13 in Yaroslavl, in the European part of Russia, where masonry of an apartment building façade collapsed, damaging a natural gas pipeline. Fortunately, there were no casualties.

Catastrophe in the barracks

The most tragic of the three incidents was the collapse of the building occupied by soldiers in the Siberian city of Omsk. One section of the barracks in the training centre of the Airborne Forces collapsed the evening of July 12. This happened when the soldiers were inside, waiting for the “lights out” command. 42 people were found buried under the building’s debris, 23 of whom died. The rest were pulled to safety during rescue operations. Some of the injured soldiers were moved to Moscow for medical treatment.

Russian President Vladimir Putin expressed his condolences to the families of the soldiers killed in Omsk and promised to “keep monitoring” the situation. Defence Minister Sergey Shoigu is heading an inquiry into the tragic incident.

According to the Russian Investigative Committee, the cause of the collapse could be normative violations during capital repairs that were made to the building in 2013-2014 (the building was erected in 1975). Repairs were carried out by a subcontractor, the RemEksStroy Company, which has earlier been fined for violating construction laws. RemEksStroy has, in the past, regularly done repair and reconstruction work for the security forces.

Reasons for the incident

Alexander Moskalenko, president of the GCE Group of Companies believes the main reason the building collapsed was because of errors in planning and the careless attitude of owners and repairers to the internal structures of the building.

Moskalenko explained why the building in Perm collapsed: “The building was erected in the 1950s, and stood firm until they started building commercial premises – offices and shops – on the lower floors. When doing such renovations, the window and door openings are usually expanded. This was the case in Perm, where the building’s load-bearing external wall was weakened by such renovations. Most likely, this was the reason for the collapse of the facade.”

About the tragedy in Omsk, Moskalenko supported the opinion of the Investigative Committee: “A couple of years ago, major repairs were carried out in the barracks. Probably during these repairs the internal structure of the partitions was weakened, and that led to the accident.”

Eminent Russian Architect Alexey Shcheglov believes the buildings are not being looked after properly. “Many old buildings are in need of major repairs, while their owners and the government try to ‘make do’ with only cosmetic repairs. It is not just the age of the buildings, but the quality of their original design and construction,” Shcheglov said.