Half of Russian marriages end in divorce 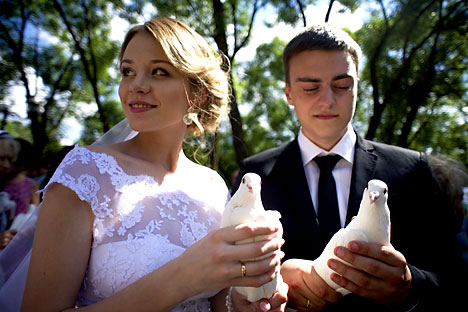 Each year we record 1.2 million marriages, of which 50% end in divorce. Source: TASS / Sergei Bobylev

For 25 years, the All-Russia Public Opinion Research Centre (VCIOM) has been studying causes for divorce among Russians. The latest results of their studies have just been published. It turns out that people today are comfortable with the idea of families disintegrating. While living for years in market economy conditions, with its fluctuations, Russians have started looking very pragmatically at the institution of marriage, and at each other; with less tolerance.

The All-Russia Public Opinion Research Centre has been a premier institution studying causes for the collapse of the family as a unit for a quarter of a century. These studies are indicative of the mood of the Russian people, and provide pointers to what is believed to be important in the family, and what is undesirable.

Our perceptions about marriage; the roles of husband, wife and children; are an incredible mixture of conservatism and intolerance towards each other. The family is sacred but, if problems arise within it, the first cure is divorce.

The percentage of those who think that a divorce is possible only if the family has already actually collapsed, over the last 25 years, has declined by one third (dropping from 39% to 27%). There are fewer people who generally believe that divorce is unacceptable (in 1990, they constituted 13% of the population and in 2015, they account for 11%).

Statistics do not paint a happy picture; each year we record 1.2 million marriages, of which 50% end in divorce. Russia ranks first in the world in terms of the divorce rate – UN data. The first disillusionment teaches us nothing; the same fate befalls those marrying for the second time (50% of remarriages also break up).

“Russians continue to be largely traditionalists. They believe that women need, above all else, children, home, and a permanent relationship,” said Margarita Fabrikant from the Laboratory of Comparative Studies of Mass Consciousness at the Higher School of Economics. “In this respect we are similar to people in Greece, Malta, Romania, Montenegro, Slovakia, Hungary, and Bulgaria, i.e., the post-socialist and southern European countries. At the same time, we are even more tolerant than people in Europe are, when it comes to single mothers and abortions.

The fact that people are no longer afraid of divorce, sociologists say, is part of a global trend; fewer marriages, and more divorces. However, common-law marriages are growing, accounting for a quarter of all families in Russia. It is becoming more common to start having children outside of marriage. In the 1970s and first half of the 1980s, 11% of all children were born outside of marriage, while by the mid-2000s, this figure grew to 30%! Twenty-five years ago, one-third of Russians were convinced that it was impossible for a single parent to raise a child well. Today, this view is shared by only 13% percent of the Russian population.

The growing popularity of common-law marriages seems understandable; people want to take a closer look at each other. However, today they are inclined to maintain informal relations for longer periods of time. Previously, until 1990, a couple needed less than a year to decide whether to officially register their marriage. Now it takes more than two years to come to this decision. And yet, this does not guarantee the longevity of a marriage. According to sociologists, those who most often seek divorce are couples who were married over 30 years ago, and those with 5-9 years of relationship experience. In 80 percent of divorce cases, it is the wife who takes the initiative. The one for whom the family and children are placed above everything else.

Common-law marriages in Russia still need a thorough study. For now, sociologists are talking about the immaturity of potential spouses; ones that are reportedly not confident in their ability to build long-term relationships with another person.

Being uncompromising or cruel to each other, an unwillingness to accept the shortcomings of a partner, are other traits of family relationships today. For many couples, it is easier to get divorced than to spend time and effort in trying to achieve rapprochement and understanding. Experts say, in this respect, we are part of the worldwide trend; a modern society that is enchanted by individualism. However, this “individualism” also has purely materialistic motives. People trust each other less and less.

“Probably, the partners are afraid of losing their property, and in particular housing, in the event of a breakup. After all, one cannot get insurance for the collapse of the family, but it is possible to insure against losing an apartment after a divorce – simply do not register an official marriage,” explained Alexander Sinelnikov, Assistant Professor of Sociology of the Family and Demographics at the Sociology Faculty of MSU. “However, to admit this to a partner is awkward. And thus begin the popular explanations – we love each other anyway, why do we need to complicate things, why waste money on a wedding, etc. However, behind these excuses lies the fundamental lack of faith in the strength of the relationship. In Russia, marriage is no longer seen as a lifelong union. “