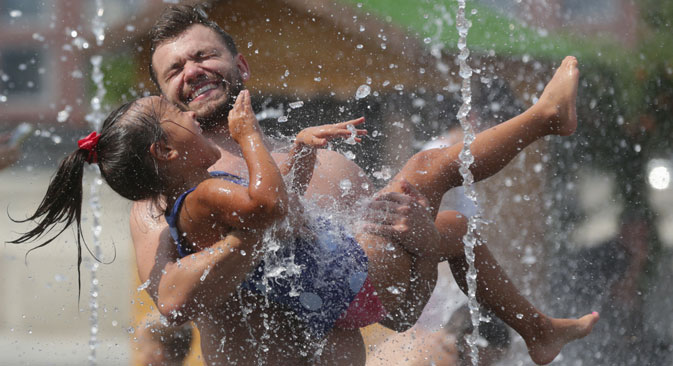 Pavel Smertin/TASS
The three basic attributes little Russian girls are required to possess are civility, attentiveness, and a caring attitude. If a girl is possessed of these virtues, then she is considered well brought up. We look at how daughters were raised in the Soviet Union and what has since changed.

Russian parents are slowly beginning to apply a scientific approach to raising children, particularly girls. During the Soviet era, the function of parents was often replaced by educators and teachers in the upbringing of children. Today, however, people try to spend time with their children, and even attend training courses and read books on psychology to learn how to be good parents and communicate with children.

It is especially important that fathers show an interest their children’s upbringing. Earlier, in many Russian families, fathers largely had only a formal presence. This created a whole generation of women who saw no point in founding and maintaining a traditional family structure.

Eastern fathers and European ones

As psychologist Alina Kolesova explained to a Moskovsky Komsomolets correspondent, the role of the father, which is important for a girl and her development, depends on social mores.

According to European norms, a girl is brought up freely. She values her independence and demands that men be equal partners. She learns from childhood to take responsibility for her own actions. In Eastern cultures, however, the father occupies a dominating position and makes decisions for the daughter; what she should do and whom she should marry, also taking responsibility for these decisions. As far as these conventions go, Russia lies somewhere in the middle; men are very strict with their daughters in some areas, while giving them a great deal of freedom in other areas, which some girls cannot handle or know how to use. Often, as a result of these dichotomies, it is not easy for Russian women to build a family life.

Maria is 33 years old. She has not been married and has never even been in a long-term relationship. The young woman thinks it not worth building a family like the one she grew up in.

“Formally, our family was completely ordinary. My parents did not divorce. They did not have children outside of the marriage, just me and my brother,” she tells RIR. “It used to seem absolutely necessary to get married, but then I realized I did not want to build a family and that I do not know what it should be like in order to be a happy one. My father basically did not participate in raising me or my brother; Mama did everything, but she did not have much time for us because both parents had to work. As far as I can remember, I always had to make my own decisions, and I am not very good at seeking counsel. To be fair, when I was a teenager, my father demanded that I return home not later than a certain time set by him, but as soon as I grew up a bit, he completely lost interest in my life, like in childhood,” Maria said.

She claims to now have a very good relationship with her parents, but lacks warm memories of childhood. “Maybe if they had paid more attention to me or talked with me more, then I would want to be part of a family and would start to build my own. But it’s easier and more logical for me to remain single,” said the young woman.

Her friend Alexandra is 34, and the situation in her family was similar. She says she always wanted a child, but it did not matter who the father would be.

“I got married, but my husband tried to totally control me, forbidding hobbies or fun. He even secretly sold my bicycle so that I couldn’t go riding on it. He said all this is necessary for maintaining the family,” Alexandra said. So, “we divorced after living together for 6 months.” The woman has a five-year-old child who she raises herself. “I haven’t figured out yet whether I needed a father’s influence, but he never gave his opinion even though he was always present with us and did not go out with friends. I am not sure that this is the sole reason for how my relationships turned out. For example, my sister got married and has been truly happy for 16 years already. She has two children,” she said.

Politeness, attentiveness, and a caring attitude

Svetlana Rudneva, head of the charitable foundation ‘Family and Childhood’, explained to RIR that, when a girl is being raised in Russia, the foremost values they try to develop in her is courtesy, attentiveness, and a caring attitude. If a girl is not coarse in manner and is able to care for others, then she receives approval in the family, from the father and others around. If the father supports and commends the outward appearance, then the child will not have problems in the future.

“In the traditional Russian family, the father always participated in the rearing of the children; he taught them crafts, how to work in the field and so on,” Rudneva said. “But in Soviet times, this started to change because both parents were sent to work and it was proclaimed that teachers and educators must deal with the children. There are also such families now, but as a rule this affects lower-income households where people are forced to spend a lot of time at work and do not have time to engage in childcare. If their income is above-average, many fathers spend time with their children.”

Rudneva says Russians have now started to show interest in the psychological specificities of childrearing, and even attend special training courses.

“I have noticed increased interest on the part of parents in psychological literature and training programs where they learn how to talk with their children about the opposite sex. And this applies to fathers as well as mothers,” she concluded.