Dagestan: Living on the front line of Russia’s fight against terror 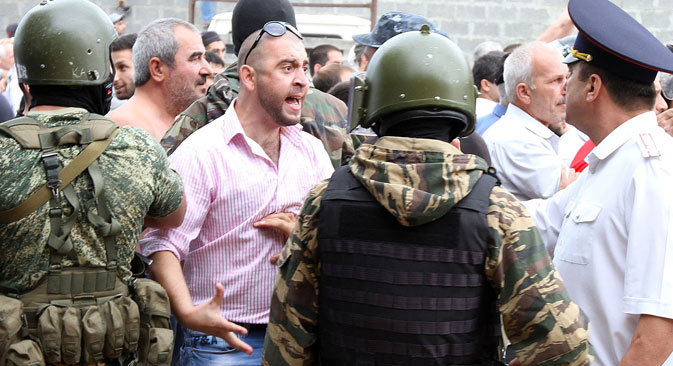 Local residents clash with security forces in the village of Karaman in the vicinity of Makhachkala, Dagestan, Aug. 21, 2013. Source: Ruslan Alibekov/TASS

For several years already, Russia’s southernmost republic Dagestan has been the epicenter of terrorist activity in the country, with state law-enforcement agencies and special services engaged in a continuous struggle to identify and neutralize terror cells. However, as RBTH reports, these anti-terrorist units do not always use the most humane methods, which inevitably complicates the lives of local residents.

We are in Gimry, a mountain village in Dagestan’s Untsukulsky District. This is the birthplace of two legendary imams, Shamil and Gazimagomed, local chieftains who put up fierce resistance to the Russian Empire in the 19th century and have become a symbol of national pride for the people living here.

Since the 1990s, this area has become a stomping ground for various illegal armed groups and the scene of frequent counterterrorist operations – operations that are rarely greeted with understanding and support from the local population.

The most recent special operation here took place in June, with federal forces killing two militants. On this occasion, however, locals were impressed by how the military conducted the operation.

“They acted quite professionally. They must have had reliable information,” said Sagid, a native of Gimry, who until recently was a public activist. Sagid himself had to change his place of residence in order to stay alive.

“This special operation, of course, cannot be compared to what happened in Vremennoye (a settlement in the same district – RBTH). There things got very scary,” said Sagid.

On October 18, 2014, Vremennoye was declared the subject of a counterterrorist operation (KTO). The special operation lasted for more than two months, during which security and military forces killed seven suspected militants. In the process, 16 private houses were blown up and the foundations of several residential blocks were badly damaged as security forces searched for terrorist bunkers. As a result, cracks appeared in three apartment blocks, which now stand empty. The remaining seven were damaged too, but people continue to live in them, repairing the damage themselves.

“Why did they do this to us? Before the KTO was introduced, there had not even been a single exchange of fire here. They made us suffer for two and a half months. And now nothing is being done to restore the houses, the settlement,” complained a female resident of Vremennoye, who asked not to be named.

The woman recalled how the settlement was fenced with barbed wire and all the local residents over 14 – civilians, who had not been charged with anything – were given a number. They also had their fingerprints and DNA taken and were told to walk in front of the camera, to have their gait captured on film.

The numbered local residents, the woman continues, were used as human shields, and were sent out to enter empty apartments suspected of being used by terrorists. Other locals have similarly emotional tales to share. However, local residents are angered most of all by the rough conduct of the military and security personnel, who damaged their property, threw their furniture out into the street, left graffiti on the walls and knife scratches on the doors.

Locals complained against the actions of the military and even wrote a letter to Russian President Vladimir Putin asking him to look into the matter. A source in the Dagestani prosecutor’s office told RBTH that this complaint from the local residents is being considered but no decisions on it have yet been taken.

As regards the destruction of houses, investigators are inclined to support the military. The militants killed were hiding in fortified underground bunkers where “a large number of improvised explosive devices (IEDs), components for them, firearms and ammunition” were found.

“Since there was a danger of their spontaneous detonation,” the IEDs were destroyed on the spot, “as a result damaging the residential buildings in which they were found as well as nearby buildings,” RBTH was told at the prosecutor’s office.

However, not all local residents and activists accept these explanations of why residential buildings were destroyed.

“Security forces as a rule justify their actions by saying that explosive devices were detected and had to be destroyed on the spot for safety reasons. However, in some cases there are grounds to doubt that this was indeed the case,” said Varvara Pakhomenko, a consultant with the International Crisis Group.

“When people return to their homes and see offensive inscriptions on the walls, it all looks like a punitive operation rather than like a fight against the militant underground.”

Pakhomenko added that law-enforcement agencies are stepping up checks and detentions of devout Muslims, especially Salafis.

“They are detained in public places; there are even raids on private homes. People are taken to police stations, where they are fingerprinted and photographed. It happens on a regular basis. A database is being compiled, which is popularly known as ‘the Wahhabi register’,” she said. Unsurprisingly, this situation often causes irritation and misunderstanding among local residents.

Two years ago, Vladimir Putin signed a law whereby losses resulting from a terrorist attack are reimbursed “at the expense of the perpetrator and their immediate family and other individuals whose life, health and wellbeing the perpetrator cares about for personal reasons.”

It is so far hard to assess the effect these measures have had. Primarily because there are considerable discrepancies in statistics. For instance, just recently, in July, the head of Dagestan, Ramazan Abdulatipov, said that in 2014, only 12 terrorist crimes were recorded in the republic, compared with some 300 two years previously.

However, slightly earlier, in March, the republic’s interior minister, Abdurashid Magomedov, announced that in the same period of time “20 acts of sabotage and terrorism involving the use of explosive devices were prevented and 161 bandits were killed while putting up armed resistance.”

At the same time, the Kavkazsky Uzel online publication, which keeps its own statistics, says that “in 2014 the number of victims of the armed conflict in Dagestan fell by more than 50 percent”: 208 people were killed and 85 injured, while in 2013, the figures were 341 and 301, respectively.

Experts attribute discrepancies in the figures to amendments in Russia’s anti-terror legislation. Last year, the list of crimes falling under the definition of “terrorism” was expanded to include political assassinations, preparations for and organization of mass unrest, etc. The new definitions make it possible to press criminal charges, among other things, for “inciting, recruiting or otherwise engaging a person” in terrorist activity.

Suffice it to note that 15 out of the 46 people on last year’s list of political prisoners compiled by the Memorial human rights center are either civil activists from the North Caucasus or members of Islamic organizations banned in Russia. By way of reference, ethnic groups that are considered Muslim make up about 10 percent of the population of Russia, while practicing Muslims make up just 6-7 percent.

At the same time, it should be noted that all experts agree that terrorist activity in the North Caucasus has decreased in recent years. They attribute this to the success of Russian law enforcers in cracking down on the militant underground ahead of the Sochi Olympics and to the emergence of new terrorist organizations outside Russia – specifically the so-called Islamic State (ISIS) group, which recruits Islamic extremists of all hues into its ranks. According to various estimates, there are already from 2,000-5,000 Russian nationals fighting for ISIS – a problem that is rapidly becoming a threat of an altogether different scale. 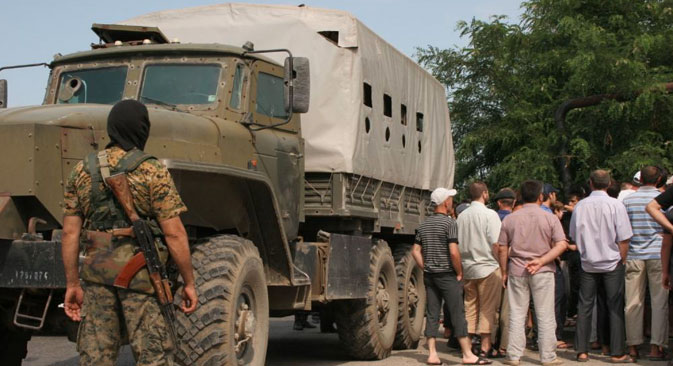