Russians not opposed to Internet censorship 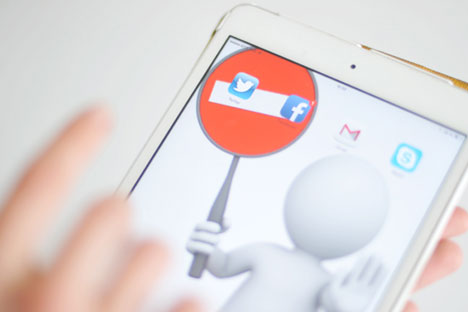 Eugene Kurskov/TASS
According to a joint report by American researchers and Russian sociologists, almost half of Russia’s population is not opposed to censorship of the Internet. They do not perceive attempts to control the Internet as an infringement on the freedom of speech, say analysts.

Around 49 per cent of Russians believe that information available on the Internet should be subject to censorship, while 58 percent would not mind it if, in the event of a national threat, the Russian segment of the Internet is shut down completely.
Authors of a report on "Benchmarking Public Demand: Russia’s Appetite for Internet Control", arrived at this conclusion. The report was produced as part of the Internet Policy Observatory, a programme at the Centre for Global Communication Studies at the Annenberg School for Communication at the University of Pennsylvania. The report was written by Erik Nisbet, an associate professor of communication, political science, and environmental policy at the Ohio State University. This study is based on a survey designed and implemented by the Russian Public Opinion Research Center (VCIOM), in partnership with the Centre for Global Communication Studies.

Russians name homosexual propaganda (59 percent) among the most "dangerous" content that should be banned, along with social network groups linked to organizing anti-government protests (46 percent), and videos by the Pussy Riot band (46 percent).

"From the perspective of assessing the public’s demand for Internet freedom, the results are somewhat discouraging," Monroe Price, head of the Centre for Global Communication Studies, concludes in the report.

The study was published in English in February 2015. However, Russian national media took notice of it only in early August after the findings were also published by VCIOM. The poll was conducted among Russian residents aged over 18 years, in 42 regions of the country. Of those polled, 42 percent use the Internet all the time, 20 percent use the Internet from time to time, and 38 percent do not use it at all.

According to another pollster, the Levada Centre, to whom RIR has spoken, the margin of error aside, the number of Russians who support Internet censorship remains quite stable.

In a Levada poll in November 2014, the introduction of Internet censorship was supported by 54 percent of respondents. "They are in favor of censorship when it comes to things like child pornography,” Levada Centre analyst Denis Volkov explained. “And there is an important distinction between the opinion of those who use the Internet and those who do not. For the latter, the Internet is a source of a vague threat. They do not know what to do about it and so it seems to them that the best thing may be just to ban everything."

It is important to note that in the poll the question about a total ban was hypothetical; censorship in Russia is banned by the Constitution, and President Vladimir Putin has more than once declared that "Russia has no intention of restricting access to the Internet or taking it under total control."
However, since 2012, the number of initiatives aimed at blocking various Internet resources has been steadily growing, said Karen Kazaryan, chief analyst with the Russian Association of Electronic Communications. "Not all of them become laws, but a large number of those initiatives, our experts conclude, were restrictive in nature, and aimed not at developing the industry but rather at controlling the Internet," he said.

In an interview with the BBC Russian Service, Anton Nosik, a prominent Russian blogger and online media expert, questioned how representative the study was, adding that in practice censorship in the Russian segment of the Internet already exists.

"If, with the help of these polls you are trying to measure how many people in Russia use the Internet, you end up with a ridiculous minority. Whereas, if you take device data and data on the number of Internet access user accounts in Russia, you end up with a figure of more than 80 million people,” said Nosik. “There are several dozen or several thousand district courts in Russia, each of which has powers to ban websites, including Wikipedia, YouTube, Google. All it takes is a ruling by a district court. When that ruling comes into force, the Justice Ministry enters the website banned by the court on the federal register of extremist literature. From that moment on, the website in question must be banned in the whole territory of Russia."

Obligation of the state

According to Irina Levova, director of strategic projects at the Institute of Internet Studies, attempts to control the Internet are natural when the state is trying to develop the Internet segment, since there are also cyber threats to be taken into account.
"It is a direct obligation of any state to ensure the security of its basic infrastructure and citizens. In the USA too, there is the first amendment that bans censorship. However, in 2001 the Patriot Act was adopted which, in effect, makes it possible to do anything when it concerns national security," Levova said. In Russia, she said, “the Internet is not yet under as much control as it is in the USA and some EU countries. For example, Russia has more sophisticated mechanisms for preserving anonymity on the Internet.”

Overall, sociologists and experts conclude, the majority of people prefer not to pay attention to restrictive initiatives because they do not affect them directly. At least, there has been no rise in protest sentiment on that account.
"Many people took notice of the proposal by the Russian Union of Copyright Holders to charge 300 rubles a year from every Internet user for the benefit of copyright owners. But that was more of an exception since the move concerned people's financial interests. Everything else is received normally; after all, people are not expected to grasp what legal risks these initiatives may cause for individual companies," Levova pointed out.

Volkov agreed: "The majority of people certainly do not see it as an attempt to restrict their right of access to information."