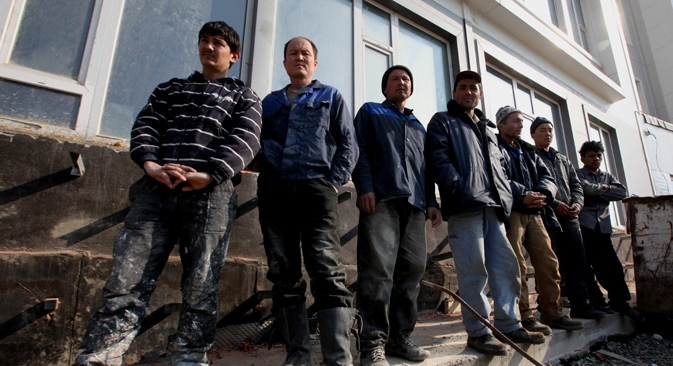 As Europe questions how to cope with an influx of refugees from Syria and American presidential candidates debate the role of Central American immigrants, Russia faces its own challenges. Thousands of citizens of former Soviet republics come to Russia every year looking for work, but difficulties obtaining legal status and anti-migrant attitudes make it hard to build lives there.

Rashid came to Moscow from Tajikistan last year. He is 20, has no particular qualifications and speaks broken Russian. He lives in a two-room apartment in the city’s northern suburbs with his brother’s family and several other people. He works odd jobs, mostly as a loader in a market. “I make about 20,000 rubles a month, sometimes less,” Rashid said. It’s almost a third of the average Moscow salary, but more than he was making at home.

As a citizen of Tajikistan, a member of the Commonwealth of Independent States (C.I.S.), Rashid didn’t need a visa to enter Russia, and could stay without any additional permission for 90 days. Eighty percent of all migrants to Russia are citizens of countries in the C.I.S., a loose federation made up of all the former Soviet republics except for Ukraine and Georgia, according to Nikolai Kurdymov, who heads the committee on economic migration at business lobby group OPORA Rossii. But Rashid stayed longer, was stopped by the police, and fined for overstaying the 90-day limit. Additionally, his name was put on a Federal Migration Service blacklist, making him ineligible for a work permit. And so, like numerous others, Rashid takes whatever work he can find, paid under the table.

“The fact that the vast majority of migrants have no legal status in Russia is the most painful issue,” said Muhammad Amin Madzhumder, president of the Federation of Migrants of Russia, adding that of the 10 million migrants in Russia, only 1.5 million are in the country legally.

A migrant who has overstayed his or her visa or been deported is ineligible for applying for a work permit. More than two million names are on the blacklist of the Federal Migration Service, and as many as 800,000 have been deported.

Click to open in new window. Migration into Russia by the numbers, thousands of people. Infographics by Gaia Russo

Predictably, living in the country illegally hampers the ability of migrants to integrate into Russian society. Without a legal status, migrants have little incentive to learn Russian and are forced to live in basements, warehouses and other places that don’t require any kind of identity documents.

“They’re hiding. They are often surrounded by criminals, sometimes their passports are taken away from them,” Kurdymov said.

As Russia slipped into recession in late 2014, reports about migrants leaving Russia in large numbers began to appear.

However, experts say that it is too early to talk about a mass exodus of migrants.

“Most have stayed,” said Vasily Kravtsov, head of charity Migration XXI Century. “There is one telling indicator: the amount of money they send to their families back home. In rubles, this figure hasn’t declined; it has even gone up.”

And even if some migrants from Central Asia have left, their departure coincided with the arrival of up to two million refugees from war-torn Ukraine, Kravtsov said.

For years, there has been anti-migrant sentiment in Russian society, based on fears they steal jobs from Russians and commit crimes. The facts dispute this.

“It’s wrong to think that migrant workers are taking jobs from Russians,” said Kurdyumov. “Mostly, they work low-qualification, low-wage jobs that Russians are not interested in.”

Similarly, reports about high numbers of crimes committed by migrants are not supported by the evidence.

Between January and July 2015, just two percent of all crimes registered in Russia were committed by foreign citizens, according to data published on the website of the Interior Ministry.

Russian authorities have made some changes intended to improve the situation for labor migrants from the C.I.S. who want to stay in Russia legally long-term.

One major change came into effect this year 2015, allowing migrants from the C.I.S. to buy “patents” — a kind of green card — instead of applying for work permits. Unlike work permits, patents allow the holder to switch from one employer to another, and the procedure for obtaining one is simpler. But the new system also has disadvantages.

In Moscow, a migrant is expected to pay between 60,000–70,000 rubles ($950–$1,100) a year — well beyond the resources of most migrants. Migrants are also required to get medical certificates stating they don’t have diseases including H.I.V. and tuberculosis, and must pass a test on Russian history, language and law.

According to Kravtsov, the new system has encouraged corruption in some cases. “It’s no secret that many medical insurances and language proficiency certificates, which are needed to get the patents, are just bought from dubious companies eager to cash in on the situation,” he said. “And many migrants have continued to work illegally. They just bribe local police officers.”

Despite these issues, Nikolai Kurdyumov thinks the new system is at least a start toward tackling the problem. “If at least some migrants will move out of the gray economy thanks to the new system, that will be good,” Kurdyumov said.

Rashid, for his part, plans to keep working and living as he is. “I have family here, so they won’t let me down,” he said. 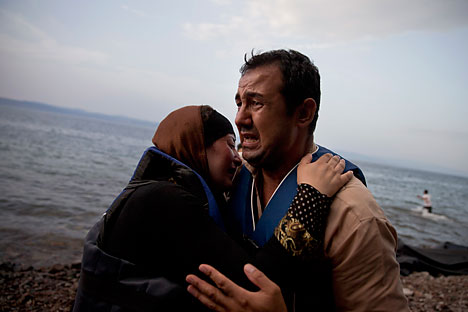 Syrian refugees in Russia: Struggling to get rooted