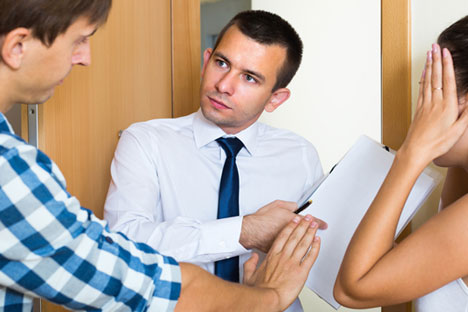 In the first six months of 2015 there were almost 22,000 complaints concerning illegal activities by collectors. Source: Shutter Stock/Legion Media

Bullying, intimidation and even physical violence are tactics usually associated with debt collectors, in Russia and elsewhere. They often exceed their authority to force people to pay. A new law on individual bankruptcy will help borrowers avoid such unpleasant encounters, though critics fear it may be open to abuse.

Evgenia Fainberg, a 75-year-old pensioner who survived the Siege of Leningrad, found her life had become a nightmare when suddenly confronted by a bank’s hired debt collectors in the spring of 2015.

She had no idea how bad things would get when she began received threatening phone calls from strangers. They demanded that Fainberg and her family pay the bank 2.5 million rubles (about $40,000) to redeem a distant relative's debt.

The strangers then started insulting the elderly woman, and eventually threatened her and her family with violence. Fainberg turned to the police, and then moved to another town permanently, at the insistence of her children, to avoid the threats and harassment.

The incident with Evgenia Fainberg is typical of how debt collectors in Russia use illegal means to achieve their goals. The Law on Consumer Credit, which controls their activities, establishes clear rules for relations between collectors and defaulters: the acceptable number of calls and messages that collectors may make in one day and the permitted time at which they can be made. The law does not permit the use of pressure on relatives or friends or threats of physical violence. However, many collecting agencies disregard the rules.

According to the Russian Interior Ministry, in the first six months of 2015, there were almost 22,000 complaints about illegal activities by collectors. Citing the prosecutor's office, the Kommersant business daily reported that checks carried out on the activities of collecting agencies and credit organizations showed that there were more than 3,500 cases of violations of the law, that 967 notifications of a breach in the law were received, 33 warnings made and 654 lawsuits filed.

At the same time, with the Russian economy in a crisis, there is a growing demand for debt collectors. With inflation high and salaries shrinking in real terms, people's solvency is declining while the number of consumer debtors is increasing. According to the Russian Central Bank, on September 1, 2015, the total volume of overdue bank debts owed by Russians was about 851.5 billion rubles (about $12.5 billion).

There are many scandalous stories about creditors using any possible means to force the debtors to pay. Some collectors even go so far as to use physical force and beat up the debtors, but more often they use psychological pressure, as in the case of Moscow resident Nikolai Seliverstov. One day Seliverstov, who owed his bank money and had ignored threats by the collectors, realized that his neighborhood had been plastered with posters saying that he was a dangerous pedophile.

Meanwhile, collectors who act within the boundaries of the law harshly criticize those who use extortion and insist that they have nothing to do with the activities of their less reputable colleagues. On the other hand, the difference between "black" and "white" collectors is vague.

According to Vasily Solodkov, director of the Banking Institute at the Higher School of Economics in Moscow, "no one admits to doing things illegally. Everyone blames their neighbor, saying, well, we would never do such a thing, but other collectors can."

Bankruptcy as a way out?

However, since Oct. 1, 2015 new legislation has been in effect, aimed at protecting citizens from predatory debt collectors who may be overstepping the boundaries.

The Law on Individual Bankruptcy intends to lighten the burden of those debtors who cannot pay back their loans by providing them with the opportunity to file for bankruptcy at an arbitration court.

If the court satisfies their claim, it appoints a financial manager, an intermediary between the credit institution and the debtor. He evaluates the debtor's income and property and creates a plan for restructuring the debt that the court later approves.

The restructured debt may be significantly less than the initial one and it will be easier for the debtor to pay it off. Additionally, creditors do not have the right to demand the payment of loans from individuals who file for personal bankruptcy while the case is still in progress.

At the same time, some experts are afraid that the bankruptcy procedure will become a cover for dishonest debtors who technically can pay off their debts but choose not to. In the opinion of Vasily Solodkov, the law "potentially opens opportunities for the dishonest debtor to avoid paying off a loan."

"If he possesses, for example, several apartments, cars and so on, he won't be able to keep it all. All his property will be reduced to the minimum," he said.