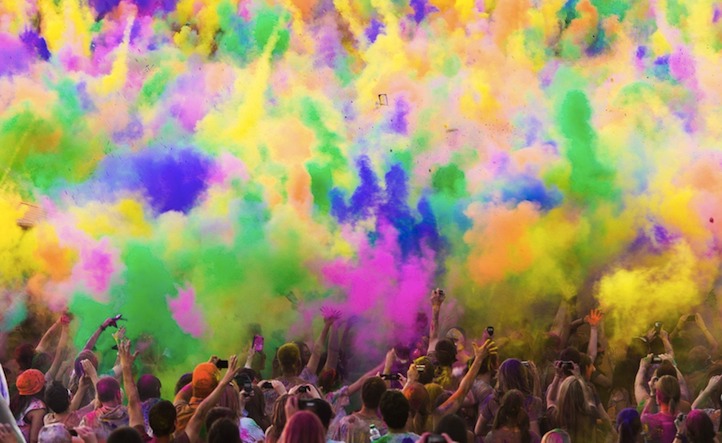 The festival of colours was organized for the first time in Moscow in May 2013.

colorfest.ru
The Indian festival of colours, Holi, or Colourfest, has become a champion of the annual entertainment calendar of events in Russia in recent years.

The most vivid and joyful celebration in the world, the Indian festival of colours ‘Holi’, attracts increasing numbers of followers in Russia each year. It has tens of thousands of fans today, not only in Moscow and St. Petersburg, but also in many other Russian cities; Astrakhan, Volgograd, Perm, Chelyabinsk, Ufa, Voronezh, Lipetsk, Izhevsk, and Kursk.

The festival of colours was organized for the first time in Moscow in May 2013. Around 15,000 people came to the Izmailovo Kremlin to get to know the Indian festival. It could be expected, the organizers said, that the Russian people were unlikely to be indifferent to previously unknown fun with colours. However, no one expected it to be so very successful.

A year later, on June 7, 2014, Colourfest gathered more than 85 thousand people in "Luzhniki", the largest sports complex in Moscow, and became the biggest in the country. Now in its fourth year, the festival is held several times during the spring and summer in different Russian cities and the number of fans is growing steadily. In 2015, the festival of colours Holi was again held in the Moscow "Luzhniki", bringing together almost 140,000 people, according to official statistics.

Ringing in the Russian spring

In India, Holi is a celebration of spring, with its history going back to ancient times and having mythological roots. In Russia, the festival has no religious content. However, the meaning and spirit have remained the same; by smearing each other with bright colours, people wish each other good luck, happiness and prosperity. And the more you are smeared with colour, the more good wishes you receive; and Russians have grasped this well. Just like the fact that by throwing colours around, you get rid of fatigue and negative emotions, freeing up space for joy and love for each other.

An important feature of the Holi festival of colours is the ability to get a feel of India’s cultural traditions, which many people in Russia deeply respect.

The desire to be in the festive atmosphere of "disobedience" and irrepressible fun, at least for a couple of hours, attracts tens of thousands of people. In addition to this, there is usually a disco with popular DJs, fairs and children's playgrounds. The festival also provides an opportunity to meet new people: the organizers prepare an online meeting platform in advance, where everyone can find friends.

Another form of fun activity has spread recently around the festival grounds: young people join hands to build a large circle of a few dozen people. Young men not included in the circle find girls who have caught their fancy among those passing by and bring them inside the circle. In order to get out of the circle and regain their freedom, the captives need to embrace one of the kidnappers.

Alexey Ovchinnikov and Roman Makarov, graduates of the Economics Faculty of Moscow State University, having once attended the festival of colours in Dresden, decided to try to organize a similar festival in Russia. But having started to look for suitable colours, young people found that the niche was practically empty. Products available on the market were not suitable in quality or price. Hence a company was created to produce the colours, Univer Club Family.

"In the first year we produced 8 tons of colours and held 14 festivals in 8 Russian cities. Seeing that Holi was “a great success" in Russia, we decided to invest all our profits to expand and increase our production. In 2015, we were successful enough to hold 183 festivals in 97 cities of Russia, Kazakhstan, Ukraine and Belarus, produced 160 tons of colors, and in the autumn, we won a competition for young entrepreneurs GSEA 2015," said Makarov, head of the " Russian Holi festival" project.

Scrambling for a two-front war: What the IAF won’t tell you

The company is currently actively looking for partners in Eastern and Western Europe, the USA and South America. According to the young entrepreneurs, many European organizers are looking for suppliers of colours from Russia as buying colour here today is more profitable than it is in India or in China.

This year, a difficult economic situation in Russia in makes its own adjustments to the development of the Colourfest festival movement. "This year, we expect the Russian market to shrink by 15-20 percent. Still, the crisis and the spending cuts are felt, and people are gradually beginning to limit themselves in areas which include entertainment. At the same time, we are confident that the ruble is very much undervalued, and such an imbalance in prices will not last long. That’s why we will now try to take advantage of the window that has just opened up and gain a foothold in the market, as we are unlikely have such  an opportunity next year", said Ovchinnikov, the CEO of the Univer Club Family Group of Companies.

It is possible that the crisis will have a negative impact on the festival, but the festivity must still be held. In just a few years, the festival of colours has become an integral summer tradition for thousands of people in Russia. And this year also, people are looking forward to the Indian rainbow in the sky.

"It is impossible to convey the feelings that you experience while you are at the Colourfest,” said Anastasia. “There are thousands of strangers around you, completely liberated, singing, dancing and sprinkling each other with colours. Everyone at once lets out their positive emotions; at the same time receiving them from others. It is as if the Holi Festival of colours takes you back to childhood, when you don’t have to think about your actions and how you may you look to others. I think this is the secret of the Holi festival’s success. Each one of the participants forgets about all their problems for a few hours, has a great time and at the same time gives a bit of happiness to others."