Life in Russia as a Syrian refugee 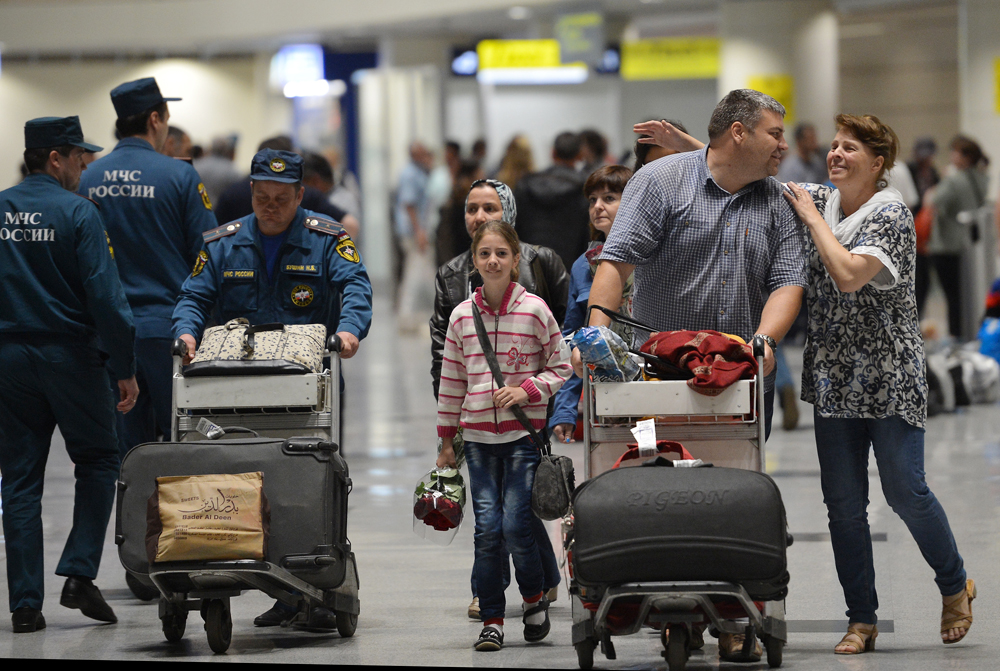 Ramil Sitdikov/RIA Novosti
Close ties between Syria and Russia date back to the Soviet era. So despite the physical distance between the two countries, there were more than 100,000 Russian nationals in Syria when the war broke out, as well as tens of thousands of mixed Russian-Syrian families. The conflict has forced many of them to seek refuge in Russia. Several Syrians talked about their struggle to carve out a new life in a new country.

Katya Toama lives like thousands of other young women in Moscow; she studies, works and teaches private English and Arabic lessons, she plays and goes out to nightclubs in her spare time. Three years ago, however, she lived in a different country, where she had an entirely different life.

Like many other children of mixed Russian-Syrian families, Toama, 31, was not spared by the war in Syria. The war forced a choice on her; whether to stay in war-ravaged Syria or go to Russia. Those who opted for Russia had to begin life anew; learn a new profession, learn the Russian language, and get used to a different cultural environment.

‘I had to start from scratch, but I'm not complaining’

When the conflict began, Toama hoped for a long time that it would all go away. The war did not come to Damascus overnight; first, the power outages began, and then the fuel shortages. The city was increasingly rocked with explosions, the sound of shooting was heard closer and closer, and thousands of refugees began to flood the streets.

But despite this, Toama continued to live as she did before, walking the dog every morning, going to work and to the university, and meeting friends in a cafe in the evening. Her father pleaded for her to leave the country, but Toama hoped things would settle down. But one day, a mortar shell flew right into the courtyard of her house. It was the last straw. The next day, Toama decided to leave Syria.

In Russia, she faced many challenges; from the language barrier to the problem of finding employment.

"It was very strange. With my 10 years of experience, I was still not required. The lack of a formal employment history was seen in Russia as a complete lack of any skills," said Toama.

With her strong accent, Toama found that she often alarmed people she spoke to.

“As soon as I said that I came from Syria, I was immediately bombarded with questions, and I had to convince them that, yes, I lived a full life and worked in Syria; yes, I am a Christian, and yes, I am just as much a citizen of Russia as they are, and the state does not provide any special support for me. People thought I had come to live a fancy life at Russian taxpayers' expense," she said.

Now all of that is in the past. Having lived in Russia for six months, Toama has managed to adapt; to find a job and enrol in university.

"I had to start from scratch, but I'm not complaining," she said, adding that her colleagues and teachers are very supportive.

Does she dream of returning to Syria one day? "No, I will not able to re-start from scratch," she said.

Fadi Saleh, 29, a journalist with the state-owned channel RT, on the other hand, does not rule out that he could one day return to Syria. The war at home was a kind of push for him; he had been planning to go to Russia to study, but kept postponing this move.

The first problem Saleh encountered was bureaucratic red tape; the processing of documents necessary for staying in Russia, since his parents did not make the effort to register him as a Russian national at the time.

Two years later, Saleh finally managed to obtain a residence permit, but it will take him five years to become a citizen of the Russian Federation.

"It is unfortunate that we, half-Russians, are not entitled to a simplified procedure," he said.

Another problem is the difference in mentality. Although half-Russian, Fadi grew up in Syria. It took him a year and a half to adapt to his new environment.

Today, Saleh is finishing his studies for a master's degree at the Higher School of Economics in Moscow, while continuing his career as a journalist, which he started in Syria.

Friends, campus, work; he now has everything he needs.

‘Who would have thought that the war would teach us to appreciate home?’

Mariam Hassan (not her real name), 45, arrived in Russia in 2013, along with her two children.

"I expected that I would see the glorious Russia that I saw in the 1980s, but society and mores have changed – people have become tougher," she said.

The children were no problem; they speak Russian and have citizenship, so they started to go to school at once. But Hassan faced hard times.

"I am a doctor, and you can imagine how difficult it is for foreign doctors to confirm their diplomas," she said. "It took many months, and I was being asked for documents that do not even exist in Syria."

In the end, everything was settled: There was work, clients, and the children were well integrated. But after two and a half years, Hassan packed up and went back to Syria. What prompted her to return with her children in the midst of the war?

"It's my husband," she said. "He can't come to Russia, because he does not have citizenship and does not speak Russian, and he would not agree to come here and do nothing."

Another factor was a lack of housing in Russia. For two years, Hassan was trying to secure social housing from the state, but her attempts were in vain; the Federal Migration Service (FMS) categorically refused to support forcibly displaced persons.

According to Hassan, she came to Russia only for the sake of her children.

The conflict in Syria, which, according to the UN, has killed more than 250,000 people and forced millions more to flee their homes, started in March 2011. There are 4.8 million officially registered refugees from Syria.

At the beginning of the war, Syria was home to over 100,000 Russian nationals. Tens of thousands more had Russian roots, typically on their mother's side. The exact number of such mixed Russian-Syrian families is not known.

According to the Russky Mir foundation (dedicated to the popularization of the Russian language) and Rossotrudnichestvo, the government agency responsible for distributing civilian foreign aid, it is difficult to maintain detailed statistics, given that the members of these families are mostly citizens of Syria, and given that Syria is home to many Russian-speaking immigrants from the countries of the former USSR, who are frequently mistaken for Russians.

Before the war, Russian-Syrian families mostly lived in the major cities of Syria – Damascus, Aleppo, Homs, Tartus and Latakia.