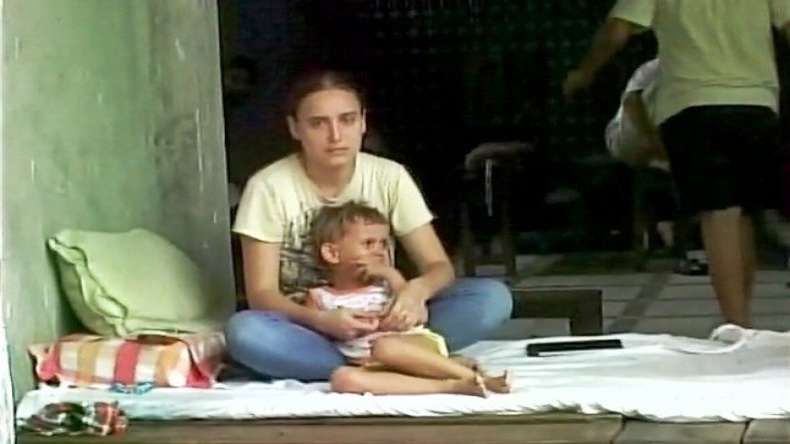 Olga Efimenkova with her daughter.

newsx.com
A Russian woman in Agra, who had accused her in-laws of harassment, was "united" with her husband’s family on Sunday evening after India’s External Affairs Minister Sushma Swaraj and Uttar Pradesh state Chief Minister Akhilesh Yadav intervened.

Olga Efimenkova, a Russian woman married to an Indian man Vikrant Chandel, ended her hunger strike against alleged “harassment” by her mother-in-law after Sushma Swaraj, India’s External Affairs Minister (EAM), intervened in her support on Sunday.

According to TV channel NDTV and Hindi language television news channels, Efimenkova said she had been on a hunger strike outside her family home in Agra since Saturday, after her mother-in-law threw her out of her house, allegedly because she did not bring any dowry. Her husband Vikrant and their three-year-old daughter were also not allowed inside the house, she said.

Being a Russian ‘bahu’ in India

A few hours after receiving Swaraj’s request on Twitter, in which the EAM had also said such incidents “give the country a bad name,” Yadav's office tweeted a photo of the re-united family saying, "The lady has been united with the family after counselling the in-laws."

UP Chief Minister Yadav sent senior local police officials to check and a counsellor to speak with Efimenkova’s mother-in-law and sister-in-law on Sunday morning. After a few hours, the family was reunited and Efimenkova and her husband and daughter entered the house. Reports said that a truce had been reached.

Tweeting her satisfaction, Swaraj said, “Thank you Akhileshji, for resolving this. Such incidents affect country’s image.”

Efimenkova studied Chinese philosophy and did her post-graduation in the subject from the Russian State University in Moscow. She came to Goa on a visit before she was about to pursue a doctorate in Confucianism, but she fell in love with and married Vikrant, who ran a beach-side restaurant in Goa, in 2011.

She lives in Goa with her husband and daughter and had come to visit her in-laws in Agra last month. Differences flared in the family, and Efimenkova’s mother-in-law, Nirmala Chandel, allegedly forced them to move out on Saturday, saying she would only let her in if she brought dowry.

Efimenkova, who immediately went on a hunger strike to protest the maltreatment, told media agencies, "These people are torturing me mentally. They say you have no clothes, you have no food in your home, and you did not bring anything as your dowry.”

“They say you're an outsider, you can't do anything here, we'll throw you out," Efimenkova said.

The practice of women bringing dowry to marry a man is widely prevalent in many parts of India, including the state of Uttar Pradesh, particularly among more backward communities. Relatives of the groom often ask the family of the bride for dowry, in the form of cash or expensive gifts, like cars, motor scooters, televisions, laptops, washing machines and so on.

Denying charges that she had harassed Efimenkova for dowry, the mother-in-law Nirmala Chandel said, "She (Olga) gambles, she drinks, she uses drugs. They take away whatever money I manage to save. I only live in one room of the house. The rest of it belongs to my daughter."

Chandel said had she does not want Efimenkova to come again to her home (in Agra) because of cultural differences.

Agra, home to the Taj Mahal, is located in UP, India’s largest state/province.

The twitter world has been buzzing with reports about the incident. One person tweeted to the UP Chief Minister, “If Mr Putin gets to know, then Mr Akhilesh (UP Chief Minister) you will not be able to hide anywhere. She is not from UP.”

Both Swaraj and Yadav received kudos from their twitter followers for acting to quickly resolve the issue. Swaraj is extremely active in responding to humanitarian needs and helping those in distress, whenever she gets to know of any incidents, normally involving Indians. In this case, she said such incidents harm the country’s image.

Officials in the EAM’s office confirmed that the issue had been “resolved” after Swaraj intervened.

Earlier, Swaraj was instrumental in helping a woman from Kazakhstan get a visa to be united with her husband’s family in Haryana.