Goliaths of prude want to dress ‘David’ in pants 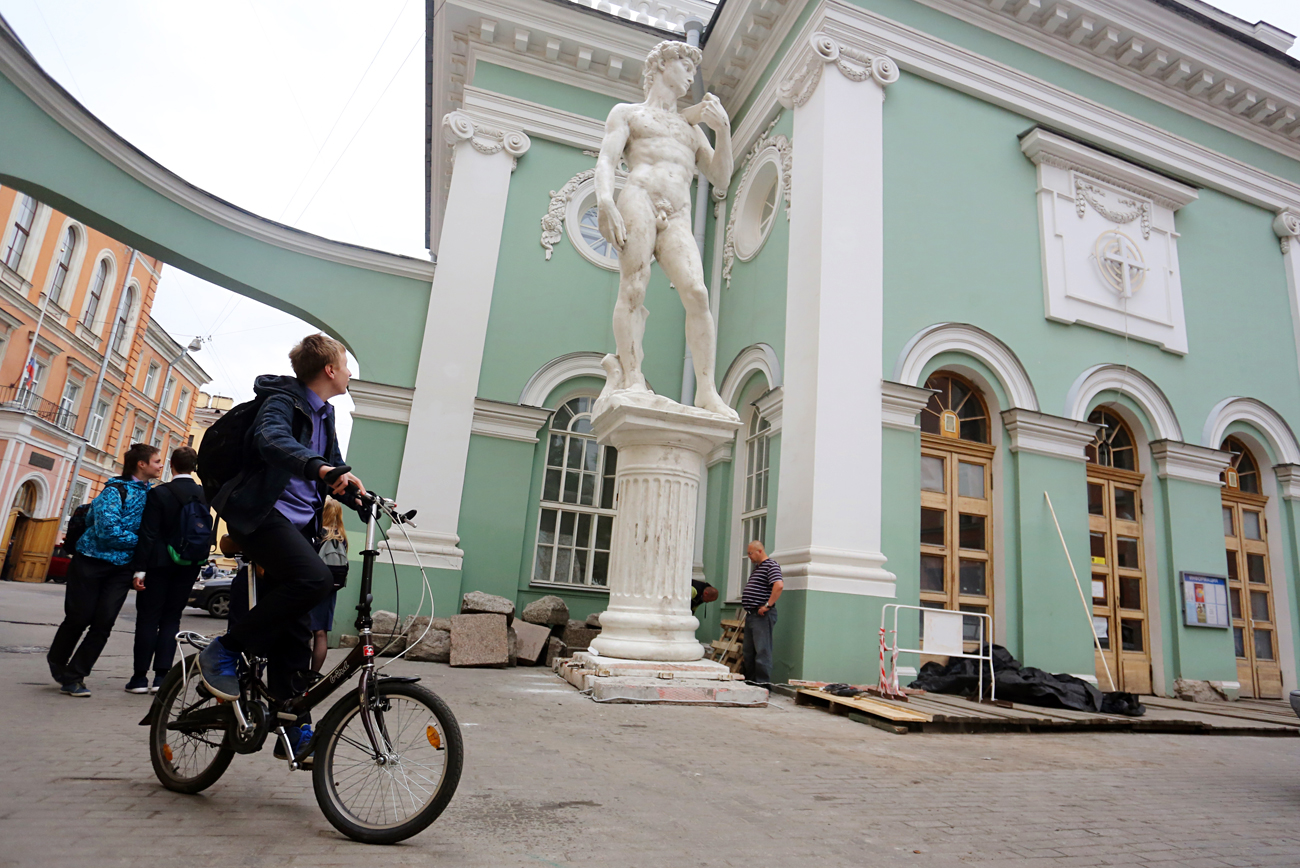 A full-size copy of Michelangelo's David sculpture installed near St. Ann's Church. The statue goes on display marking the opening of a multimedia show titled "Michelangelo: The Creation" on May 19, 2016.

Peter Kovalev/TASS
Statues, sculptures and monuments in Russia are dressed up from time to time. Statues of old Bolsheviks or literary classics can wear a student mantle, or a mammoth can drape a festive fur.It could be for a joke, or a protest or plain bigotry.

Some people complained about a copy of the legendary statue of ‘David’ that organizers of the Michelangelo exhibition placed on Kirochnaya Street in St. Petersburg. Some residents of the city thought the "naked giant deforms children's souls." Consequently, the statue was dressed!

The idea of dressing monuments is not at all new. The statue of Apollo in the Bolshoi Theatre in Moscow, for example, suddenly acquired a fig leaf in 2011 while, the next year, the monument of the great Russian poet Alexander Pushkin on Old Arbat in Moscow sported a balaclava for several hours. Sculptures are sometimes clothed as a joke, sometimes as part of political protests and sometimes just out of bigotry.

In most cases, monuments in Russia are dressed for fun. College students from Yekaterinburg (1,416km from Moscow), after graduation, usually throw a mantle and a rogatywka on the monuments of Communist icons Kirov and Sverdlov. Paradoxically, these revolutionaries did not have a university degree: Kirov had finished a technical school and Sverdlov was self-educated.

Emperor Peter I built the Russian fleet, but did not wear a sailor's vest. However, unknown pranksters decided to put the vest on his statue in Petrozavodsk (700km from Moscow) anyway. In Irkutsk (4,200km from Moscow) residents thought it necessary to wrap the paws of the legendary half tiger-half beaver, the city's symbol, in mittens. And in Salekhard, local authorities joined in the mirth and dressed the mammoth monument as Old Man Frost, the Russian Santa Claus.

Monuments are occasionally clothed to catch the attention of authorities.

"Such acts create resonance and in our case it is necessary," said Vladislav Gultyaev, a protest artist from Krasnoyarsk (3,350km from Moscow). He put gas masks on dozens of sculptures all around town in June 2016, hoping to bring the city's ecological situation to public attention. And when the Pussy Riot group organized a "punk prayer" in 2012 (sang a song criticizing the government in a church wearing balaclavas) and were arrested, Muscovites held a flash mob called "Let's turn Moscow into a balaclavagrad." In support of the convicted musicians, they placed masks on the monuments of Pushkin and his wife.

The clothes on monuments and statues are usually removed very swiftly - the police swing into action soon after being challenged. The only exception is when the initiative to cover the monuments comes from "above," as in the case of the statue of Apollo at the Bolshoi Theatre. After renovation in 2011, his groin acquired the cover of a fig leaf. The Internet was flooded with derisive remarks recalling the statue of David in the London Museum, to which a special fig leaf was attached during the Victorian Age, when notable ladies attended the museum. The remarks also mentioned that the same statue of Apollo appears on the 100-ruble note, without any kind of covering.

Last month, people realized that Michelangelo’s ‘David’ had not been remembered in vain. During the "Michelangelo: Creation of the World" exhibition in St. Petersburg an exact copy of the ‘David’ was placed at the entrance of a church. Unfortunately, the beauty of the Renaissance sculpture was too explicit for some Russians. One indignant resident complained to the Commissioner for Children's Rights. "Why did you put this guy without pants in the centre of St. Petersburg, near a school and a church?" The support of the school and the church for the exhibition did not deter the guardian of virtue.

Petersburgers will now decide the fate of the statue themselves. The "Dress David" protest has already been organized. Residents can send ideas on how to dress the sculpture in the most original way.

"I think a paranja (a Central Asian robe for women and girls - RIR) will be perfect!" someone joked in a letter. "I suggest dressing the statue as a buffoon, with ringing bells for sublime kitsch," others laugh. Cover the groin with the printed complaint, a tunic, put underwear on the statue, embroidery, a Jedi costume and even have him look like Peter I!

Almost 200 people have already sent in their proposals. Most, however, ask the authorities not to "be influenced by cretinism" and let the Goliath of bigotry defeat David.

This is what exhibition organizer Maxim Volkov hopes. "But if not," he says, "we will cover David artistically, so that it gives the artwork new meanings."