The wooden mansion at Pogorelovo: Russian fantasy in the Chukhloma forest 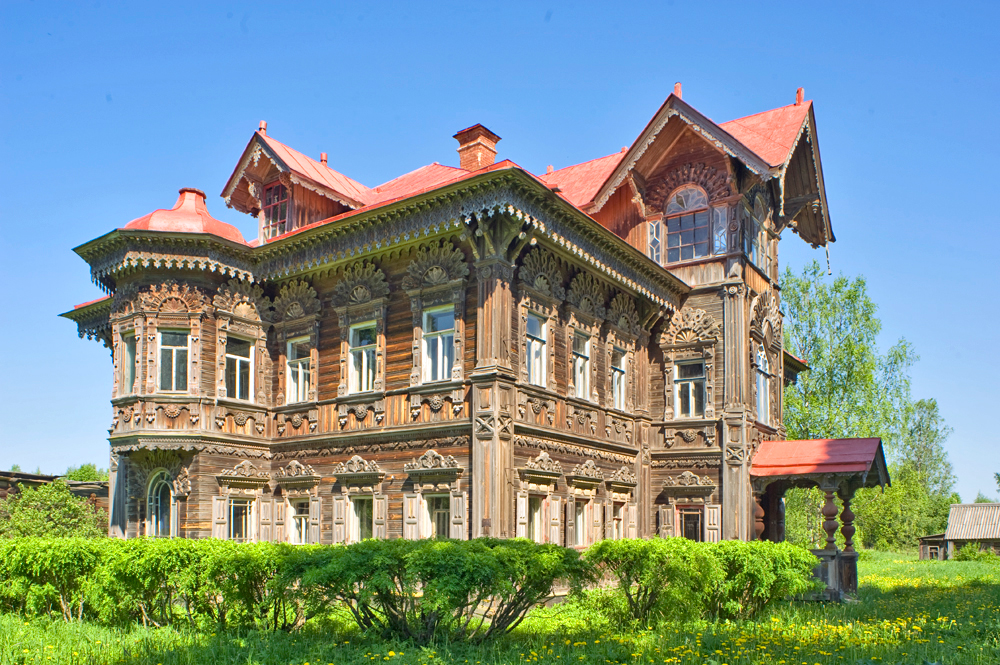 William Brumfield
This unique construction, a combination of rustic and urban styles, has managed to survive to the present day mostly thanks to the work of one man.

Within the vastness of Russia’s forests, there is a small area near the town of Chukhloma in the Kostroma Region that contains two extraordinary wooden houses. One is the Terem mansion at Astashova; the other is located at the former village of Pogorelovo near the Viga River.

The remarkable mansion at Pogorelovo was built at the turn of the 20th century (perhaps 1902) by Ivan Poliashov, who — like Sazonov, builder of the Terem in Astashovo — had become wealthy as a contractor during the St. Petersburg building boom. And like Sazonov, Poliashov displayed this wealth exuberantly in the design of a grand wooden house back in his native village.

Fortunately, the Poliashov house — a massive log edifice with plank siding — has largely withstood the ravages of time, both on the exterior and on much of the interior. This happy fate is due partly to differences in design and partly to the exceptional story of an artist who lives to preserve the house, even though the village that once surrounded it has disappeared.

Ivan Poliashov was born presumably in 1850, son of the peasant Ivan Dmitrev. Known as Ivan Ivanov, he assumed the name Poliashov for work in St. Petersburg. In 1868 he married one Evdokia Egorova, with whom he had two sons and two daughters. His work in the construction trade flourished in St. Petersburg, but he also developed enterprises back in Pogorelovo, including a profitable water mill and logging operations.

Poliashov’s first wife died at the end of the 19th century, and in April 1904 he took a second wife, Maria Suvorova, 26, the daughter of a priest from the village of Vvedenskoe. The second marriage produced three sons and three daughters.

After the Soviet government came to power, Poliashov’s property was expropriated, but he continued to live in one room of the house and even played a managerial role in the saw mill that he built. He died in 1935 and was buried in the cemetery of the Church of St. Nicholas at Dorok.

Although more rustic in its exterior appearance than the Terem at Astashovo, the Poliashov house demonstrates the influence of urban design in details such as window surrounds with baroque flourishes. The main entrance is emphatically proclaimed by a Carpenter Gothic tower in the center of the south façade, which received the most light. (The tower at the Astashovo Terem served a more fanciful purpose as a belvedere, or observation platform.)

Particularly notable at the Poliashov house are the elaborately carved semicircular ornaments above the windows of the second story, which serves in the classical manner as a bel etage, or floor containing the main living space. These ornamental window pediments — which can be said to resemble sunbursts, or a woman’s festive headdress (kokoshnik), or even a display of peacock feathers — proclaim the prosperity of the house’s owner and builder.

The second story culminates in an intricate decorative cornice. The structure is crowned with a half story whose components function as a belvedere. The plasticity of the structure is emphasized by projecting bays, verandas, dormers and loggia.

The plan of the Poliashov house represents a combination of neoclassical and modern concepts of the arrangement of interior space — neoclassical in the exterior symmetry and structural balance, modern for the interior with its arrangement of rooms around a central stairway. At the same time, the house contains an ample space that corresponds to the attached povet (storage area) of a large northern izba, or log house.

The interior of the house still preserves rooms decorated in an urbane manner that is particularly impressive on the upper landing of the main stairway. Massive carved woodwork and the strict geometry of ceiling caissons alternate with graceful wall paintings of floral motifs and arabesques.

Fragments of patterned wall paintings and stencil designs are also preserved in rooms on the ground floor, including a dining room, kitchen, a spacious pantry and what appears to be a breakfast alcove. (The lower floor could be more easily heated in the long winters.)

The preservation of so much of the interior decoration depends on maintenance, especially of the roof, in order to prevent rapid decay and collapse from moisture seepage. Many country houses were lost to such neglect in the post-war period as villages were left behind in the demographic shift to cities. This might have been the fate of the Poliashov house, yet its remarkable appearance appealed to an unlikely savior who has played a crucial role in maintaining the structure.

Anatoly Zhigalev, an artist active in the Moscow movement of non-conformist art, was so taken by the house the first time he saw it in 1971 that he decided to settle there in 1972. Over the decades, Zhigalev has lived in the house (winters excepted), and with limited assistance has managed to preserve one of Russia’s most impressive wooden monuments, a worthy companion of the Terem at Astashovo.

It must be emphasized that this treasure is isolated in a clearing among the Chukhloma forests. There is no easy access to the Pogorelovo mansion, which lies some distance from the nearest dirt road beyond the small Viga River. Apart from hiking, the best option is the use of an ATV (all-terrain vehicle, or quad). The ride is rough and requires hip boots for traversing boggy terrain and crossing the Viga. But the reward is a fantasy vision that only the Russian forest can provide.

Read more: An exhibition of William Brumfield's photographs of the Russian North>>>