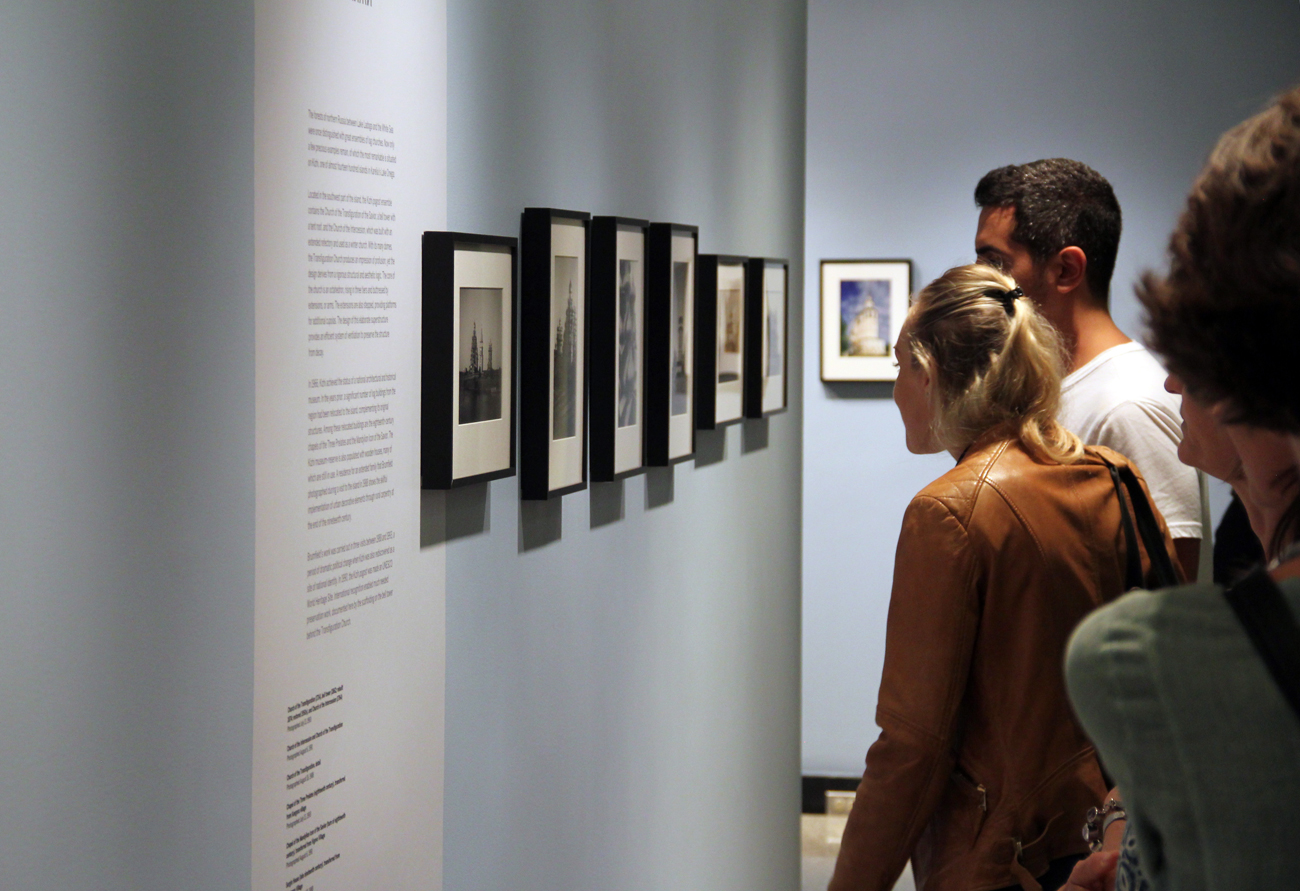 The exhibit "Architecture at the End of the Earth."

Wolk Gallery
Photos by William Brumfield on display until Jan. 13, 2017.

From the Solovetsky Islands to Veliky Ustug, the Russian North possesses an extraordinary reservoir of unexplored beauty. Since the 1970s, American Slavicist and historian William Craft Brumfield has been traveling across Russia, documenting unique buildings, houses and temples, some of which have since collapsed. Now his photographs of northern Russia’s architectural legacy are on display at the Massachusetts Institute of Technology (MIT). The exhibit, called "Architecture at the End of the Earth" after Brumfield’s latest book Architecture at the End of the Earth: Photographing the Russian North (Duke University Press, 2015), was organized by the Wolk Gallery, part of the MIT School of Architecture and Planning and curated by Ulrike Heine.

”The architecture of the Russian North is a profound part of the spiritual culture of the area around the White Sea,” Brumfield said, commenting on what attracted him to the area. “This is a severe region, but also one of great natural beauty.”

For centuries, the hardy people who lived in the region created distinctive structures of log and stone, ranging from churches and monasteries to large wooden houses. “The tall wooden churches are especially impressive, but then so is Solovetsky Monastery, whose main structures date from the 16th century. Much of the Northern architectural legacy has survived, yet my photographs also show examples of tragic loss,” Brumfield said.

'Beyond is the sea and the Arctic Ocean'

The exhibition features photographs of the village of Varzuga in the Murmansk Region; the Solovetsky Monastery; the architectural ensemble at Kizhi; the remarkable wooden church ensemble at Lyadiny, which was later destroyed by fire; the towns of Vologda and Veliky Ustyug and the village of Kimzha. Both Varzuga and Kimzha are located near the Arctic Circle.

“I chose the title ‘Architecture at the end of the Earth’ because many of the places I photographed are near land’s end,” Brumfield explained. “Beyond is the sea and the Arctic Ocean. I was drawn to the beauty created in such a remote land.”

The photographs and accompanying narrative illuminate the transformation that many of these buildings underwent as the communities they served and the cultural contexts in which they were situated changed over time.

Wolk Gallery director Gary Van Zante said that the photographs have been enlightening for the MIT community. “The exhibition has been a success introducing students, faculty and the community to the rich heritage of Russian architecture in the North. It has also raised awareness of the fragile nature of many of these structures. Although they have survived sometimes for centuries, they can easily vanish through fire or neglect, or of course demolition — like historic buildings nearly everywhere.

“I think the exhibition also introduces an international audience here at MIT to a part of Russia that few know, even many Russians,” Van Zante added.

The accompanying series of events is an initiative of the MIT Russia program. The program offers internship, research, and teaching opportunities to MIT undergrads and graduate students.

A series of events on the Russian North are planned for this fall at MIT, including Starr Forum: “The Warming Arctic: Site of a New ‘Cold War’?” on Sept. 29, a  film night with Andrey Zvyagintsev’s Leviathan on Oct. 6, a lecture entitled “Visualizing Early Russia” by Valerie Kivelson of the University of Michigan on Oct. 27 and much more. The complete schedule is available at http://news.mit.edu/2016/from-russia-to-mit-0914.

“So far, we’ve seen a lot of positive responses to Brumfield’s photo exhibition. People are immensely impressed and charmed by the unique architecture of the Russian North,” said Ekaterina Zabrovskaya, MIT-Russia Program Manager.

“With this we hope to provide a more nuanced picture of Russia and cultivate a more advanced understanding of this country with MIT’s and Boston’s communities,” Zabrovskaya explained. “The MIT-Russia Program also hopes to raise more interest in Russia, its innovation potential and its extraordinary culture among MIT students, as we believe that building bridges between our scientific communities is so important – now probably more than ever. “

"Architecture at the End of the Earth: William Craft Brumfield’s Photographs of the Russian North" can be seen at the Wolk Gallery (Room 7-338) Monday through Friday 9 a.m. to 5 p.m. through Jan. 13, 2017. The exhibition was curated by Ulrike Heine in collaboration with the photographer and with contributions by Christianna Bonin. Assistance provided by Jonathan Duval and Nina Hofkosh-Hulbert.