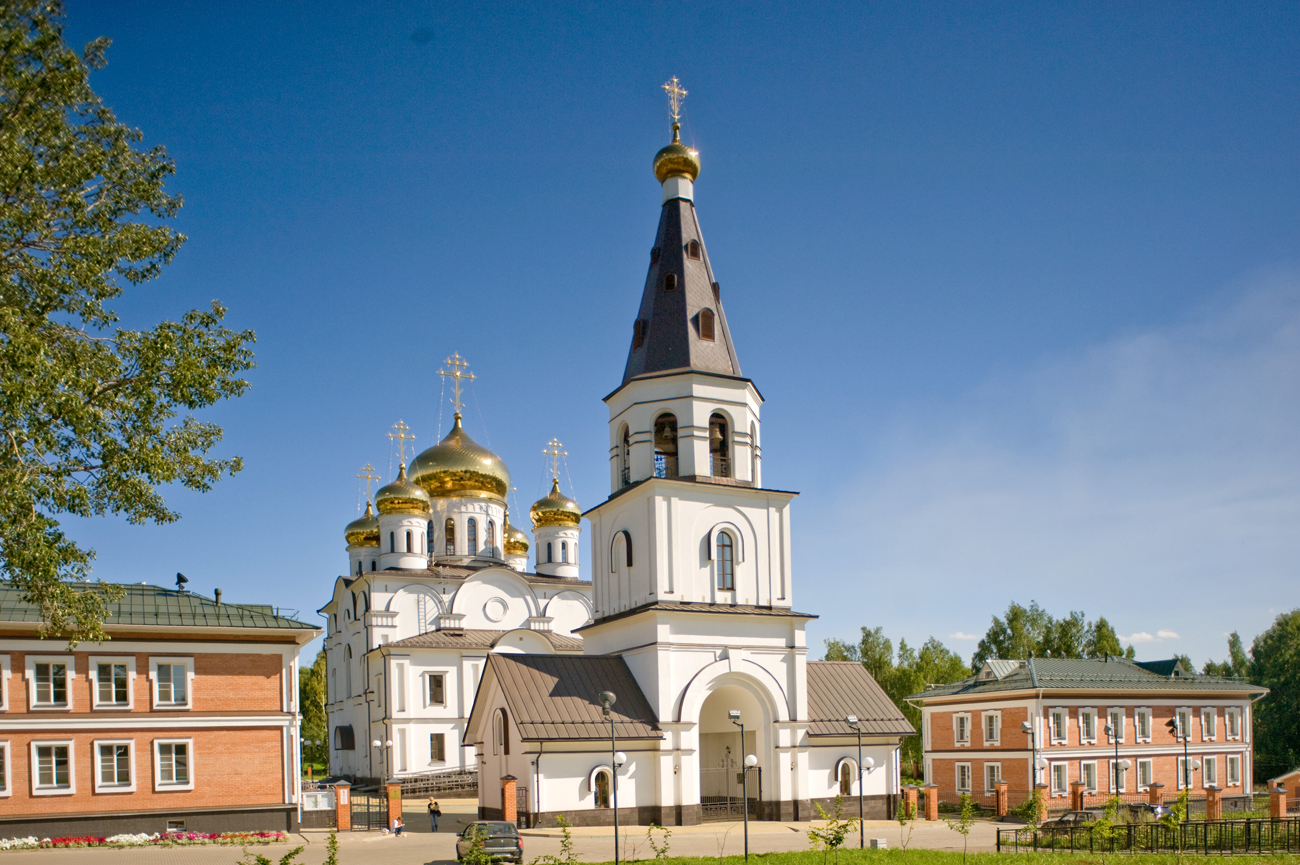 William Brumfield
Despite its inauspicious beginnings, this regional center has become one of Russia’s most important steel-producing cities, and its wealth has allowed for the restoration and maintenance of several historic churches.

Russia’s industrial might has long depended on a number of mid-size cities that have formed the backbone of its iron and steel production. The most famous of these is Magnitogorsk, located in the Chelyabinsk Region in the southern Urals, but equally important is Cherepovets (population around 318,000), situated at the confluence of the Sheksna and Yagorba Rivers in the western part of the Vologda Region. Although Cherepovets has a diversified industrial base, it is best known as the home of Severstal, one of Russia’s largest industrial enterprises.

Archeological excavations in the Sheksna-Yagorba area have uncovered objects dating as early as the Mesolithic period (several thousand years ago). By the 10th century, the local Finno-Ugric population was involved in distant trade, and Slavs began to settle the area, which fell within the orbit of Novgorod the Great.

In contemporary Russian, “cherep” means “skull,” yet there is no clearly accepted derivation for the town’s name. The earliest mention occurs in reference to a Monastery of the Resurrection in “Cherepoves,” a broad term for the area along the Sheksna.

The Resurrection Monastery was founded apparently around 1362 by Feodosy and Afanasy (d. 1392), monks from the Trinity-St. Sergius Monastery, the primary center of Muscovite monasticism. There is little reliable information about the monastery during the medieval period. Built of logs, it was burned in 1610 as part of the widespread devastation of the Russian North by Polish-Lithuanian forces during the Time of Troubles, a dynastic interregnum and period of catastrophic social disorder that lasted from 1605 through the following decade.

The impoverished Resurrection Monastery struggled throughout the 17th and 18th centuries. Its many troubles are exemplified by the destruction of the main Church of the Resurrection by a lightning strike in 1713. The monastery’s first masonry structure was a rebuilding of the Resurrection Church in 1752-1756, with two secondary altars dedicated to St. John the Divine and to Sts. Feodosy and Afanasy. In 1761, work began on a second brick church, dedicated to the Trinity and to St. Sergius of Radonezh, founder of the Trinity-St. Sergius Monastery.

Despite this modest surge, the monastery was closed in 1764 as part of the secularization of monastic holdings by Catherine the Great. Converted to parish use for the settlement that had developed around the monastery, the church became the Resurrection Cathedral with the official granting of town status to Cherepovets in 1777.

Following its designation as a town in 1777, Cherepovets gained a formal street plan in 1782 as part of Catherine’s efforts to rationalize the development of provincial centers. In 1789, the new street grid was anchored on the high left bank of the Sheksna by the construction of the Church of the Nativity of Christ in the neoclassical style favored by Catherine.

Cherepovets had made gradual progress in consolidating its position during the reign of Catherine, but a review of the regional administration at the beginning of Emperor Paul’s reign in 1796 deprived Cherepovets of its status as a town and threatened its commercial livelihood. A petition sponsored by local merchants and craftsmen halted the bureaucratic decisions, and in 1802, at the beginning of the reign of Alexander I, Cherepovets regained its town status with slightly under 1,000 inhabitants. In further affirmation of its status, the town was granted a coat of arms in 1811.

Gentry idyll on the Sheksna River

A major stimulus to the economy of Cherepovets occurred with the opening in 1810 of the Mariinsky Canal System, which linked St. Petersburg with the Volga River Basin at the town of Rybinsk. With few other settlements on the long Sheksna portion of the waterway, Cherepovets became a base for boat building and repair in addition to barge hauling. By the middle of the 19th century, its population had more than tripled, to more than 3,000. The liberation of the serfs in 1861 deprived many peasants of a way to make a living on the land and consequently increased the available labor force in towns such as Cherepovets. Taking advantage of the situation, entrepreneurs also created new enterprises and factories.

Cherepovets benefited greatly from the energetic leadership of Ivan Miliutin, a shipping magnate and industrialist who served as the town’s mayor from 1861 until his death in 1907, and advanced the town’s river transportation facilities. Although he had only one year of formal schooling, Miliutin possessed great natural intelligence and business acumen. His charitable efforts endowed the town with several schools and led to major improvements in its infrastructure. The Ivan Miliutin house has been carefully restored in a park overlooking the confluence of the Yagorba and Sheksna Rivers.

The opening of a major northern rail line from St. Petersburg through Cherepovets and Vologda to Vyatka in 1905 provided further impetus to the town’s growth. A number of handsome brick commercial buildings from that period still stand in the center of town. Of special note is the area near at the intersection of Lenin Street and Soviet Prospect (known in the imperial period as Resurrection Prospect, because it led to the Resurrection Cathedral).

From regional center to industrial powerhouse

After the revolution, transportation continued to play a significant part in the town’s development, particularly with the expansion of the Volga-Baltic Waterway and the creation of the vast Rybinsk Reservoir in 1941. During the war years, Cherepovets played a critical role in supplying the military and serving as an evacuation zone for besieged Leningrad.

The town’s phenomenal growth began after the war with the realization of plans conceived in the late 1930s to create a giant steel mill. The area’s favorable transportation links made it possible to bring raw materials — above all iron ore and coal — and ship the finished products.

The wooden mansion at Pogorelovo: Russian fantasy in the Chukhloma forest

The early 1950s saw the activation of the first Cherepovets blast furnaces, which produced pig iron. Coke production began in 1956, and in 1958 the first open-hearth furnace began producing steel. The following year brought more advances, including a rolling mill, and the enormous enterprise became a completely integrated production complex. In 1993, the Cherepovets Metallurgic Factory was privatized and became Severstal.

The town’s other major enterprise is the chemical firm PhosAgro, which specializes in the production of fertilizer and was created from the combination of two major plants: Azot (nitrogen) and Ammophos. Together, these industrial giants employ some 40 percent of the city’s workforce and place it among Russia’s top 10 industrial centers.

The fate of Cherepovets’s churches

Only a few of the town’s churches survived the Soviet period, however. The Trinity-St. Sergius Church was demolished, along with two major churches built in the 19th century — the Annunciation Church, built from 1848-1861, demolished in 1939, and the Church of the Intercession, built in 1846, demolished in 1959. The Chapel of St. Philipp Arapskii, built in the early 1880s survived along with the Chapel of St. Nicholas, built in 1904 next to the main railroad station. It has since been renovated.

The Resurrection Cathedral also remained standing, and for several years after the revolution, it was used by a splinter, pro-Soviet Orthodox group known as the Renovationists, or the Living Church movement. After the cathedral’s closure in 1934, its five decorative domes were demolished, but its wall paintings, done in 1851, remained, as did those in a refectory expanded in 1884-1885. During World War II, the structure housed a repair facility for aircraft engines, but in 1946 it was returned to the official Orthodox Church as the city’s one functioning house of worship. The decorative domes were restored in the late 1980s.

The Nativity Church was closed in 1931 and converted to various industrial uses. It later fell into disrepair, and its remaining structure was severely damaged by a fire in 1989. A revived parish launched efforts to recreate the church at this highly visible location above the river. Thanks to an outpouring of private donations, work on a reconstruction of the church and its bell tower in their original form began in 1992 and was completed in 1997.

Despite serious economic fluctuations, Cherepovets has succeeded in maintaining an economic presence that supports numerous educational, cultural and religious institutions. Of special note is the new Cathedral of Sts. Afanasy and Feodosy of Cherepovets. Begun in 2009 and completed in 2014, the cathedral compound includes a separate bell tower as well as educational and administrative buildings. In 2015, the cathedral became the seat of the Cherepovets Diocese, part of the Vologda Metropolitanate.