Suzdal’s Nativity Cathedral: From Prokudin-Gorsky to the present 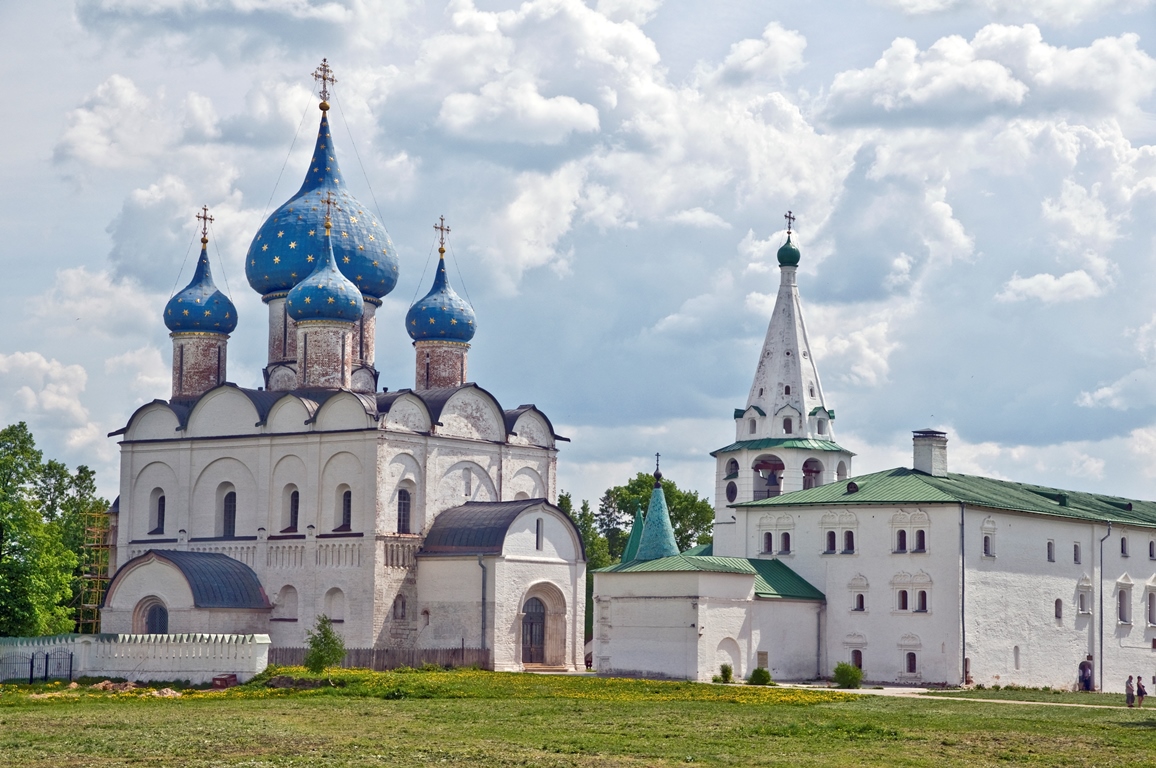 Sergei Prokudin-Gorsky spent more than 11 years traveling across the Russian Empire, documenting the country and its people in photographs. His vision of photography as a form of education and enlightenment was demonstrated with special clarity in his images of medieval architecture in the historic settlements northeast of Moscow, including Suzdal, Vladimir and Pereslavl-Zalessky.

Prokudin-Gorsky’s photographs of the ancient town of Suzdal were taken in summer 1912.  Bypassed by railroad construction and with little industry, Suzdal retained a bucolic atmosphere captured so poignantly in Prokudin-Gorsky’s photographs. At the time of his visit, the town had about 7,000 inhabitants (only slightly less than its current population of 10,000) and an extraordinary concentration of churches and monasteries. Suzdal was also renowned for its connection with the family of Prince Dmitry Pozharsky, a national hero who was instrumental in bringing about the end of the Time of Troubles in the early 17th century.

The first mention of Suzdal occurred under the year 1024, yet there were undoubtedly settlements of Finno-Ugric and Slavic peoples in the area by the 9th and 10th centuries. By the early 11th century, Kiev had extended its political and religious authority into this rich agricultural territory, and at the turn of the 12th century, Prince Vladimir Monomakh of Kiev arrived with a new wave of settlers. Monomakh erected a citadel (kremlin) above the small Kamenka River and began construction of the Suzdal cathedral around 1102. It is possibly the earliest major brick structure in the territory of northeastern Rus.

In 1222-25 Prince Yury Vsevolovich, the great-grandson of Monomakh, razed the original church and erected the magnificent cathedral dedicated to the Nativity of the Mother of God (Theotokos). The structure was built primarily of a light tufa, with limestone for the details. Prokudin-Gorsky devoted special attention to the Nativity Cathedral, which he recognized as a defining monument of medieval Russian culture. 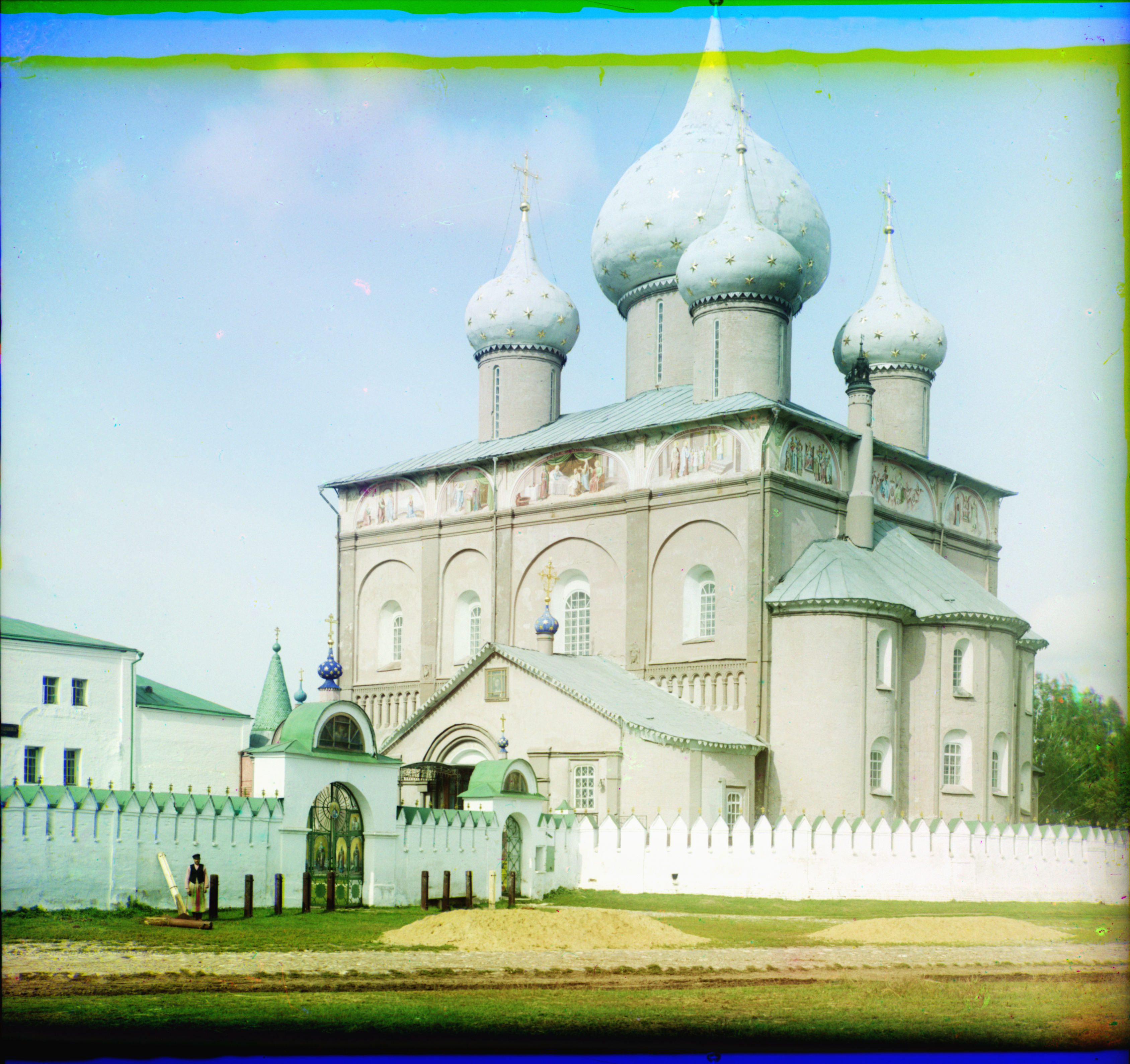 My own photographs of the cathedral span a range from March 1972 through May 2009. 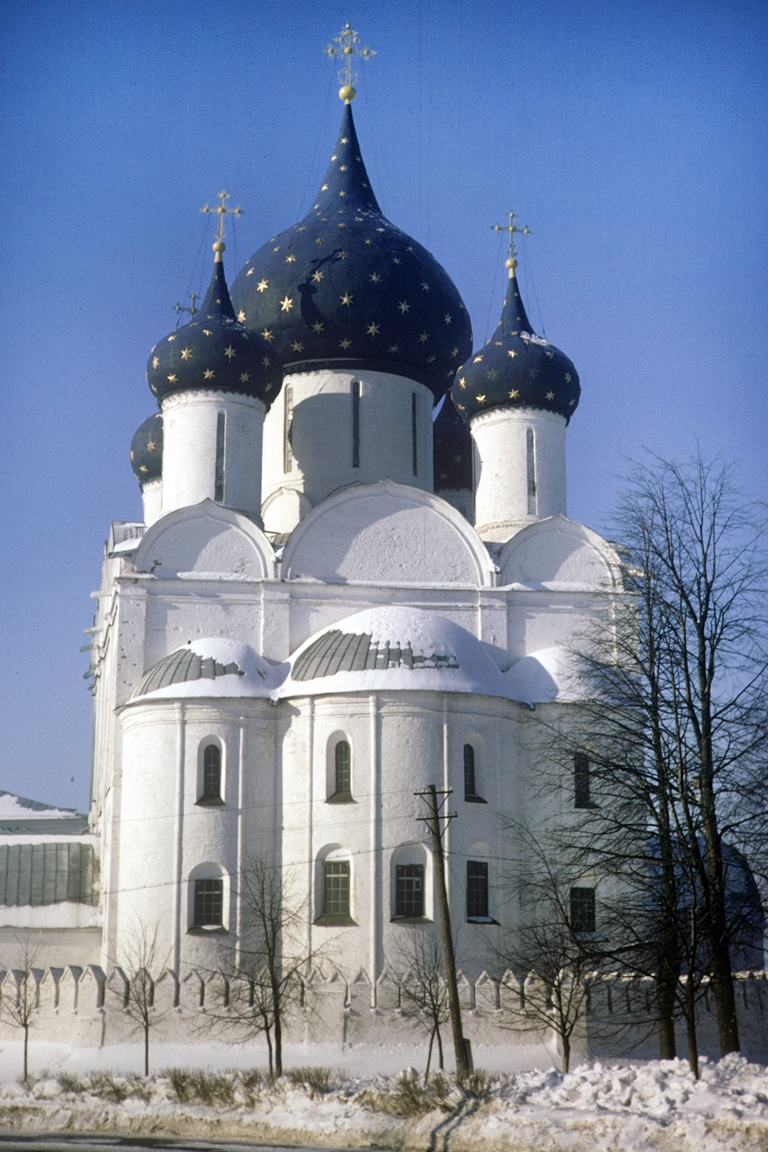 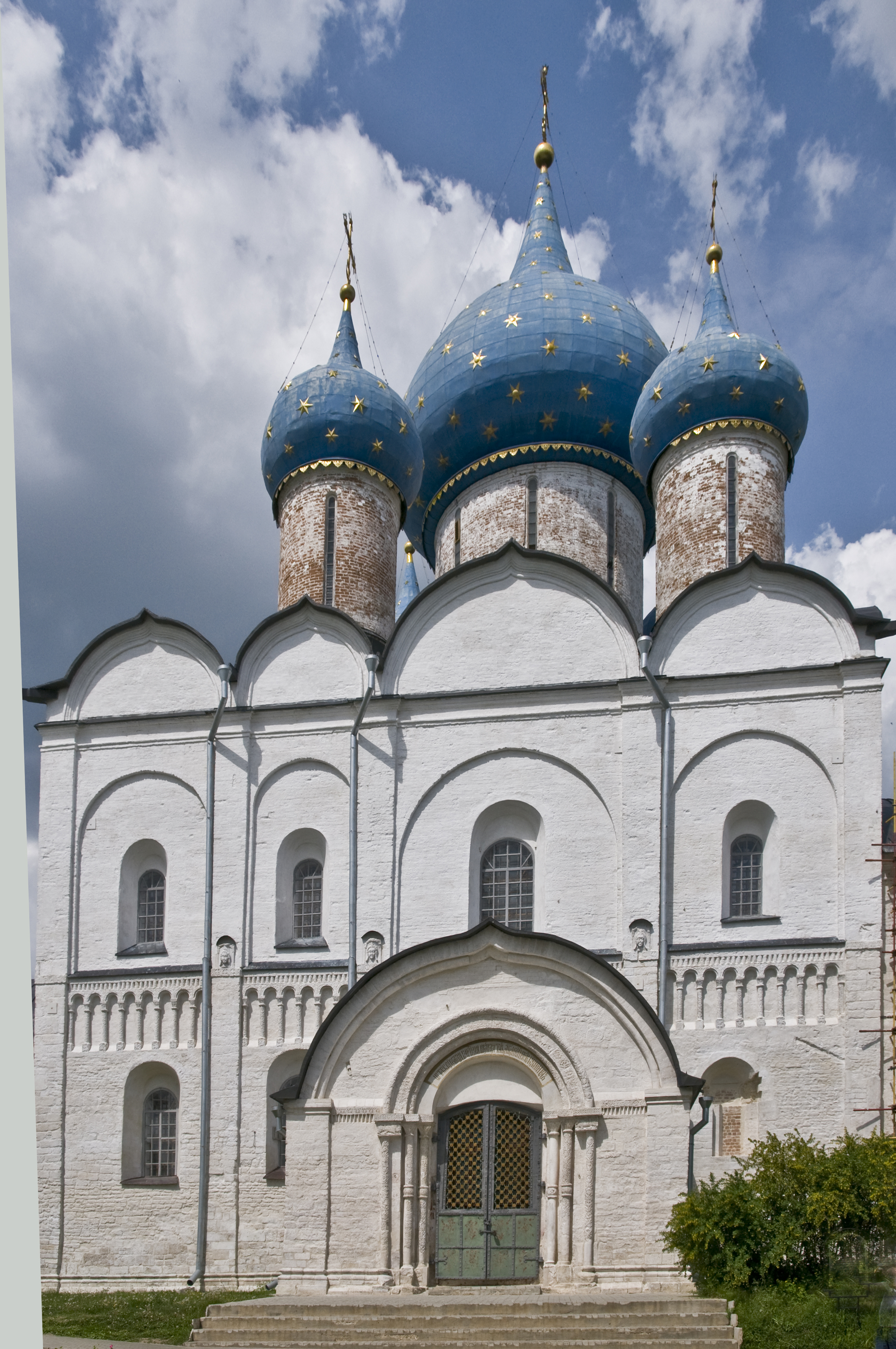 Cathedral of Nativity of Mother of God, south view. May 29, 2007. / Photo: William Brumfield

The exterior was decorated with the ornamental stone carving that is a distinctive feature of stone churches built in the Vladimir area at the end of the 12th century by Yury’s father, Vsevolod III. The carved ornamentation included columns that formed the arcade band, as well as lions and female masks at the corners and along the facades. Prokudin-Gorsky recorded these details in a separate photograph of the south façade in 1912. 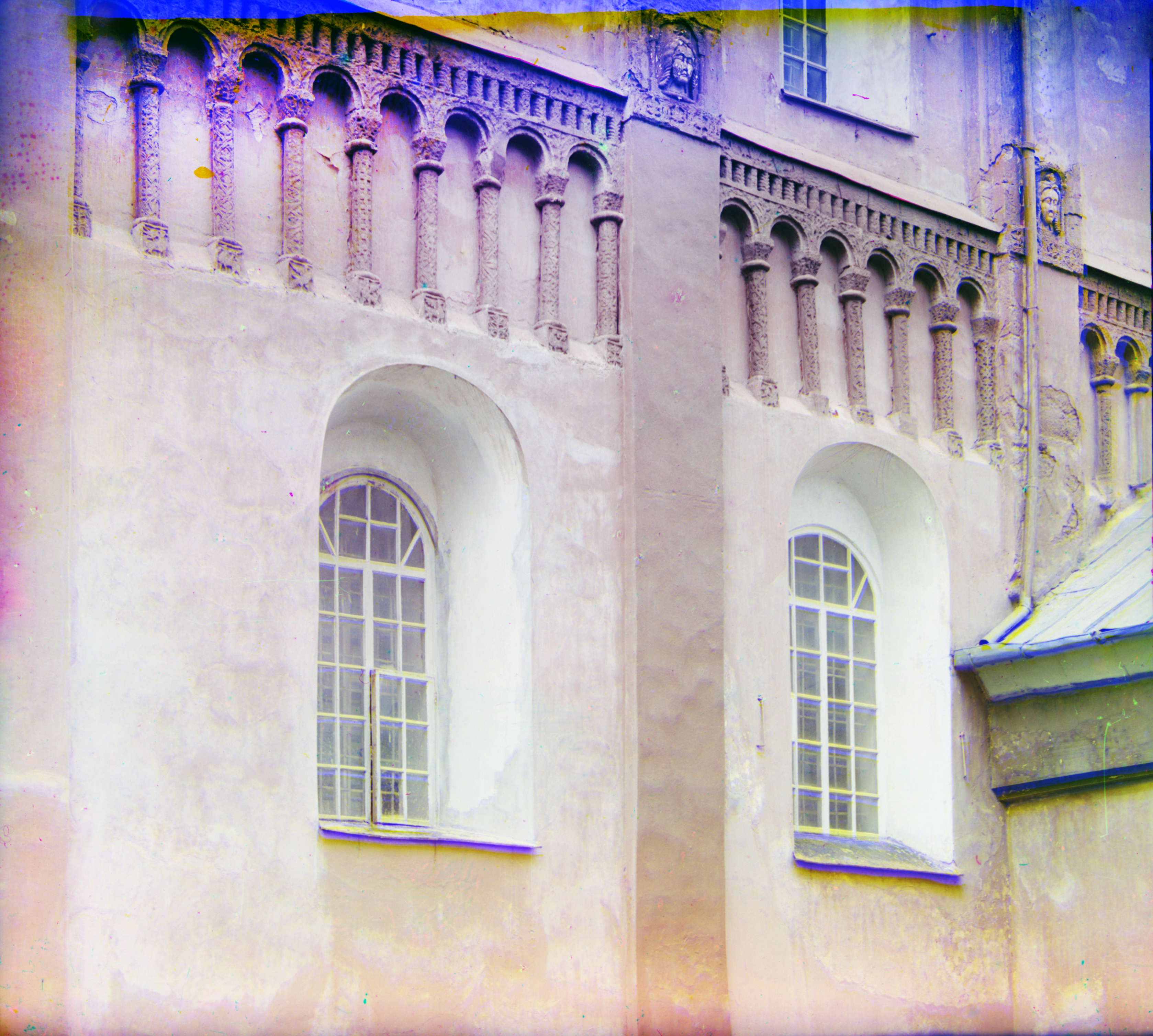 The Nativity Cathedral withstood the sack of Suzdal by the Mongols in 1238, even though the interior was completely pillaged. Through decades marked by plague, famine and invasion, the structure stood until 1445, when a raiding force of Kazan Tatars sacked the town and set fire to the cathedral interior. The attack so weakened the roof vaulting that the upper part of the building collapsed.

In 1528-1530, Moscow's Grand Prince Vasily III rebuilt the Nativity Cathedral as part of a campaign to restore the heritage of the Russian lands under Moscow’s protection. During this reconstruction, the remains of the stone walls were uniformly lowered to the level of the "blind" arcade at the top of the first floor. The upper structure and the drums beneath the five cupolas were rebuilt of new brick in the style of large Muscovite churches. Fortunately, much of the original stone carving was preserved. 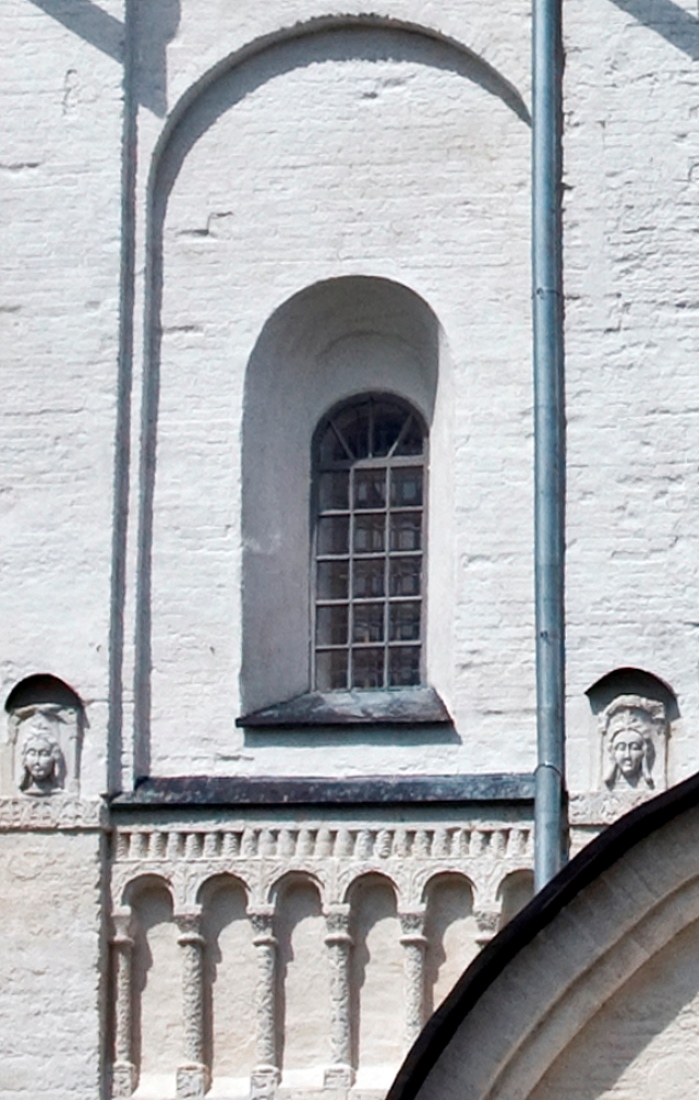 Cathedral of Nativity of Mother of God, south façade. May 29, 2007. / Photo: William Brumfield 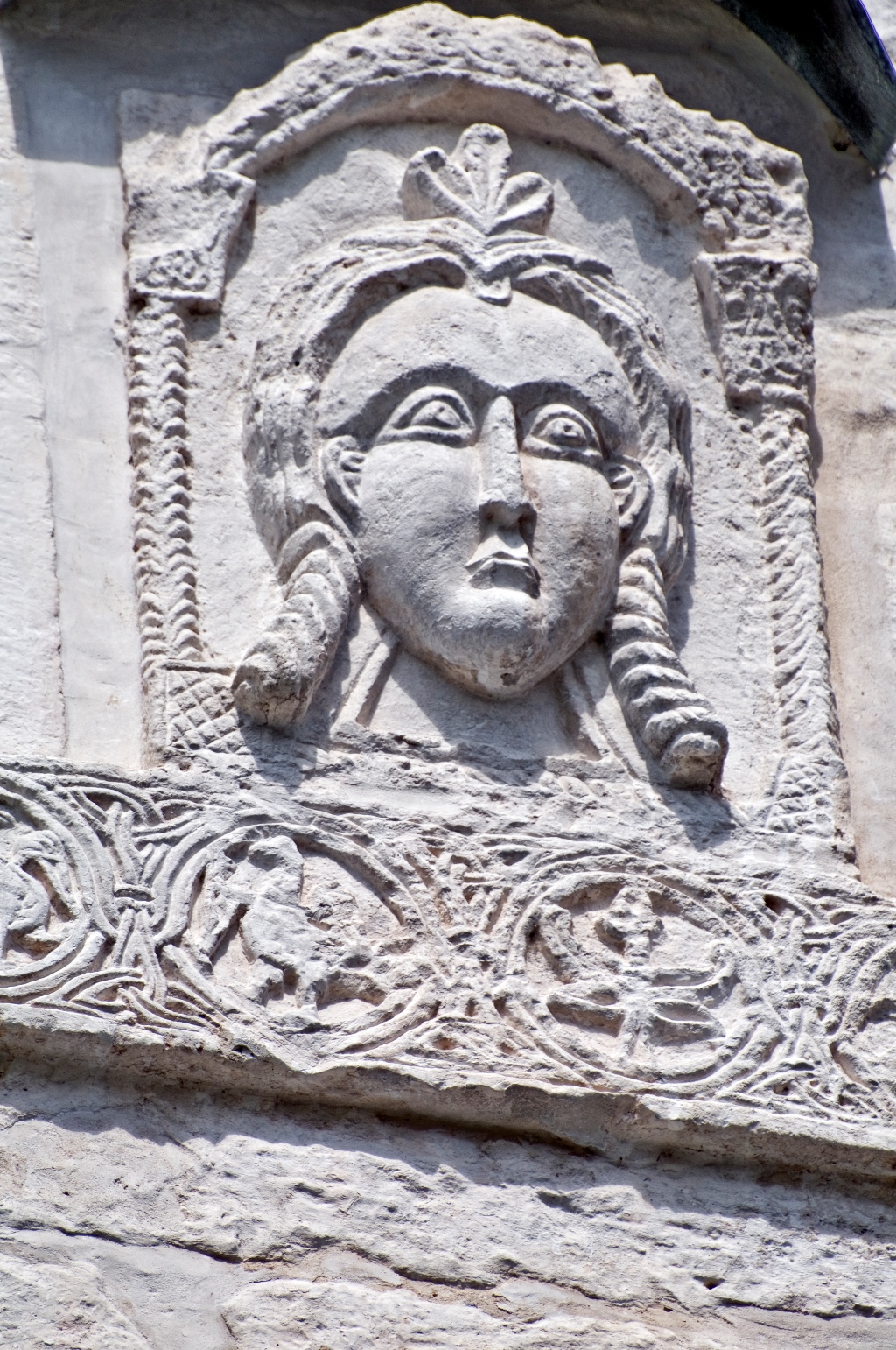 In the 1630s, Archbishop Serapion repaired damage to the structure that had occurred during the Time of Troubles and oversaw the construction near the cathedral of an octagonal bell tower with a small church dedicated to the Annunciation on its second level. Crowned by a “tent” roof, the bell tower was expanded at the end of the 17th century by Metropolitan Hilarion. A powerful and cultured prelate, Hilarion also built the third component of the cathedral ensemble, the Archbishop’s Residence. Its oldest section, visible on the left in Prokudin-Gorsky’s photograph, retained walls from  a15th-century bishop’s residence.

The upper part of the Nativity Cathedral was damaged by a major fire that swept through Suzdal in 1719, and it subsequently underwent substantial repairs. Further changes were implemented in 1748, when the five cupolas gained their flaring onion shape, and a sloped roof was placed over the rounded gables (zakomary). In 1815, a chapel dedicated to the Nativity of Christ was added to the south façade. In 1895, the cathedral gained a new heating system that required the construction of a tall chimney, which can be seen in Prokudin-Gorsky’s view.

In the 1950s, a capital restoration of the cathedral retained the 18th-century onion domes, but restored the curved roof line of the 16th century zakomary. The attached chapel visible in Prokudin-Gorsky’s photograph was removed to reveal the original limestone porch. The beige-toned aggregate that coated the facades was replaced with whitewash. Prokudin-Gorsky’s photograph shows 19th-century frescoes on the zakomary, but Soviet specialists considered the paintings insignificant as well as distracting and replaced them with whitewash. My photographs show these many changes to a monument that is now included on the UNESCO World Heritage List. 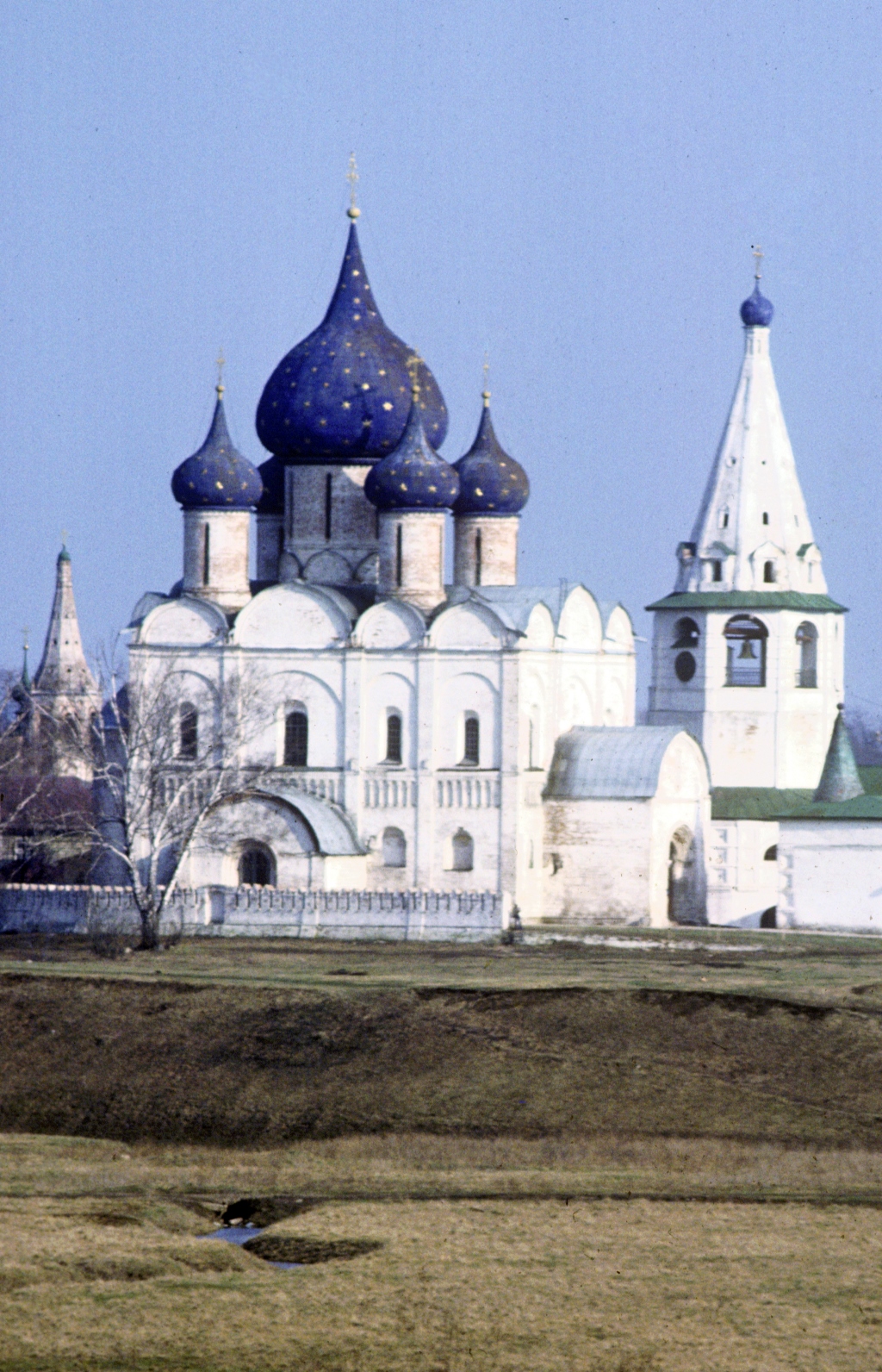 In the early 20th century, Russian photographer Sergei Prokudin-Gorsky invented a complex process for color photography. Between 1905 and 1916, he traveled through the Russian Empire and took over 2,000 photographs with the new process, which involved three exposures on a glass plate. HIs work created an important archive of the Russian Empire on the eve of the Revolution. In August 1918, he left Russia with a large part of his collection of glass negatives and ultimately resettled in France. After his death in Paris in 1944, his heirs sold his collection to the Library of Congress. In the early 21st century, the Library digitized the Prokudin-Gorsky Collection and made it freely available to the global public. A number of Russian websites now have versions of the collection. In 1986, the architectural historian and photographer William Brumfield organized the first exhibit of Prokudin-Gorsky photographs at the Library of Congress. Since 1970, Brumfield has photographed most of the sites visited by Prokudin-Gorsky. This series of articles will juxtapose Prokudin-Gorsky’s views of architectural monuments with photographs taken by Brumfield decades later.