Dubosekovo: Monument to a desperate struggle 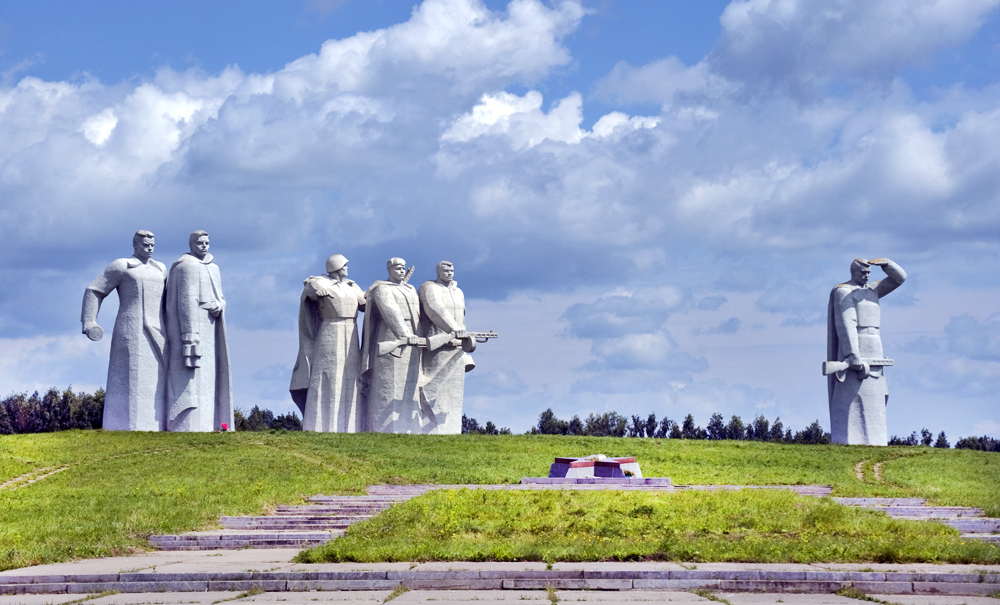 William Brumfield
The struggle to resist the Nazi army on its march towards the Russian capital is captured in the story of the Panfilovtsy, who fought and died along the Volokolamsk highway.

Volokolamsk, located about 60 miles west of the Moscow Ring Road, is among a score of small historic towns surrounding the Russian megapolis, and like the rest of these towns, it played a critical role at a certain moment in Moscow’s history. For Volokolamsk, that moment occurred 75 years ago this week, during the march of of Hitler’s armies toward the Soviet capital in Fall 1941.

One of the paved roads in the open country to the southeast of Volokolamsk leads to the village of Dubosekovo, a stop on the suburban rail line from Moscow’s Riga Station. Mostly a collection of standardized brick buildings in a semi-rural setting, Dubosekovo would seem to present little of interest — that is, until the road approaches a grassy field with six monumental statues some 10 meters (40 feet) high.

A memorial plaque notes that the statues represent the 28 Panfilovtsy who gave their lives on Nov. 16, 1941 in an attempt to block a German armored detachment headed toward Moscow. The six figures are portrayed armed and alert in a group of three, a group of two and one who serves as a lookout.

Who were the Panfilovsty? In the broadest sense, they were part of a division formed in August 1941 under the direction of General Ivan Panfilov (1892-1941). The enlistees of the 316th Division were drawn primarily from the Kazakh capital of Alma-Aty, as well as the Kyrgyz capital of Frunze (now Bishkek). The unit was made up of many ethnic groups, including Kazakhs, Russians, Kyrgyz and Uzbeks.

In the aftermath of the Bryansk-Vyazma catastrophe in October 1941, which destroyed a major Soviet army group shielding the most direct approach to Moscow, General Georgy Zhukov ordered the 16th Army, commanded by Lieutenant General Konstantin Rokossovsky, to fill the gap along the Volokolamsk Highway.  Among the army’s divisions was the 316th.

The overextended line caused Panfilov to withdraw from Volokolamsk, yet the division was still expected to block German panzer divisions in the Army Group Center commanded by Field Marshal Fedor von Bock (“Operation Typhoon”). During the four days from Nov. 16-20, desperate resistance against German armor took place in numerous actions, including an attack on Nov. 18 that led to Panfilov’s death from a mortar shell splinter. After his death, the division that he commanded was renamed in his honor.

“Moscow is behind us”

The most famous of these clashes occurred on Nov. 16 over an open area near a rail siding at Dubosekovo. Accounts of the clash at Dubosekovo first appeared in the newspaper Izvestiya on Nov. 19. The article, by one G. Ivanov, wrote of stout resistance to German tanks by a battalion in the 1075th Regiment of the 316th Division commanded by Colonel Ilya Kaprov. 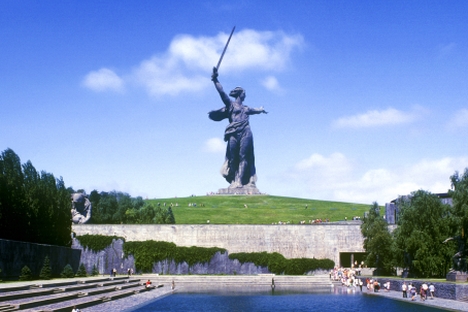 Commemorating a battle that turned history’s tide
The account that would become known to every schoolchild, however, was published in the main army newspaper, Krasnaya Zvezda (Red Star), on Nov. 27. The reporter, Vasily Koroteev, had been approached a few days earlier by the Panfilov Division’s commissar (political officer), who told of the extraordinarily difficult situation faced by the division’s troops, of units fighting to the last man in the area around Volokolamsk. Of particular note was the 4th Company, led by Captain Peter Gundilovich, in the 2nd Battalion, 1075th Regiment. Within the 4th Company was a group of some 30 soldiers inspired by the company’s political officer, Vasily Klochkov, who is reported to have said, as he lay mortally wounded:  “Moscow is behind us, there is no place to retreat.” Koroteev, together with his editor David Ortenberg, wrote that the group of 28 chose a defensible location near the railway, gathered anti-tank weapons and took up positions. When German tanks appeared, a fight to the death began with all available resources.

This account was elaborated upon by Alexander Krivitsky, also writing for Krasnaya Zvezda, who on Jan. 22, 1942 published an article on the clash, with the addition of names apparently taken from the regimental rolls. During the renewed crisis in the spring and summer of 1942, as the Wehrmacht threatened Voronezh and ultimately Stalingrad, this article — with Klochkov’s immortal words — was widely distributed to sustain morale at a critical period. And as a further boost, on July 21, the Presidium of the Supreme Soviet posthumously bestowed on all 28 the highest military honor, Hero of the Soviet Union.

Questions about the Krasnaya Zvezda version arose soon after the war when the political police found individuals from the group who had been reported dead in the Krasnaya Zvezda article. Interrogations of the writers and editor, as well as survivors of the 1075th Regiment (including Colonel Kaprov), led to the conclusion in 1948 that the account of the 28 Panfilovtsy was a fabrication.

Yet there were truthful details (including the death of Klochkov in the clash), and in the interests of preserving the heroic memory, the Soviet leadership decided not to reveal the investigative findings. The fog of war during those terrifying days 75 years ago made a precise accounting virtually impossible. The decision was made that the determination the soldiers showed in resisting Hitler’s armies and Nazi Germany was more important for the country to know than the precise number of tanks lost.

Furthermore, the attack along the Volokolamsk highway was contained. In his memoirs, Marshal Zhukov noted the valuable role played by the Panfilov Division at this critical moment. As a result, the German offensive shifted northward toward the Leningrad highway, where they were ultimately checked after advancing as far as the area around the Moscow suburb of Khimki.

The apotheosis of the heroic memorialization occurred in the mid-1970s with the creation of the monumental sculptural ensemble. One of the lead designers was the sculptor Alexei Postol (1920-2011), who had actually served as a private on the same sector of the front in in November 1941. He was joined by sculptors Nikolai Liubimov and V. A. Fedorov. Dedicated May 6, 1975, the ensemble was intended to reflect the various ethnic groups among the Panfilovtsy. It shows them both united and separate, facing great peril.

Not far from the monument in the village of Nelidovo is a short tree-lined lane leading to a common grave with a granite stele. On the opposite side are carved the names of the Panfilovtsy as officially recorded. 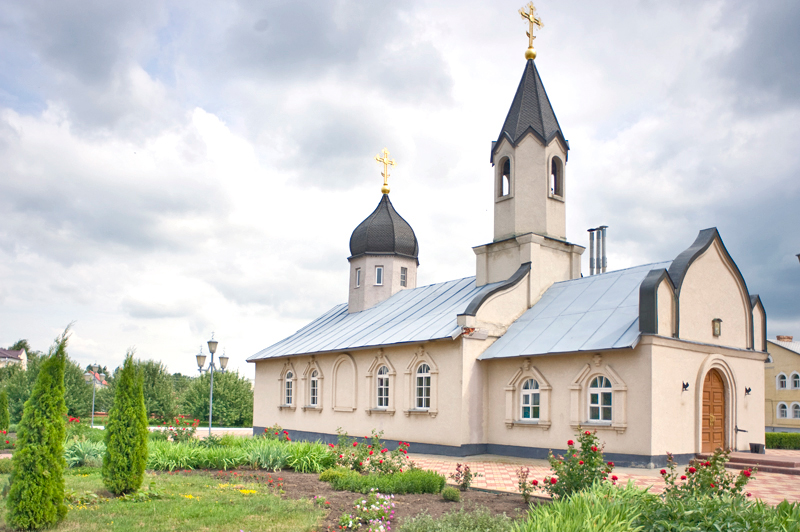 The Prokhorovka Memorial Complex: Bearing witness to sacrifice and faith
The Panfilovtsy narrative appeared at a time when the risk to survival was immeasurably great — not just the survival of the regime, but of the nation, the people and their culture. Having come so far and staked so much on the capture of Moscow, the Germans were not going to suddenly turn and abandon arms. Soviet units resisted at great cost. Someone stood and someone died. The recent efforts of Search Brigades — a national movement to rebury the remains of Soviet troops found in unmarked burial pits — shows all too clearly the grim price paid.

The ongoing discussion about the Panfilov troops and their role in defending Moscow has served to renew attention to this period, when so much hung in the balance — and not just for Russia. The account of the 28 Panfilovtsy points to an overarching truth about resistance in the fall of 1941.

The Dubosekovo memorial is — together with the Mamev Kurgan memorial to the Stalingrad battle — among the most impressive monuments from the Soviet period.