Smolensk Dormition Cathedral: From Prokudin-Gorsky to the present 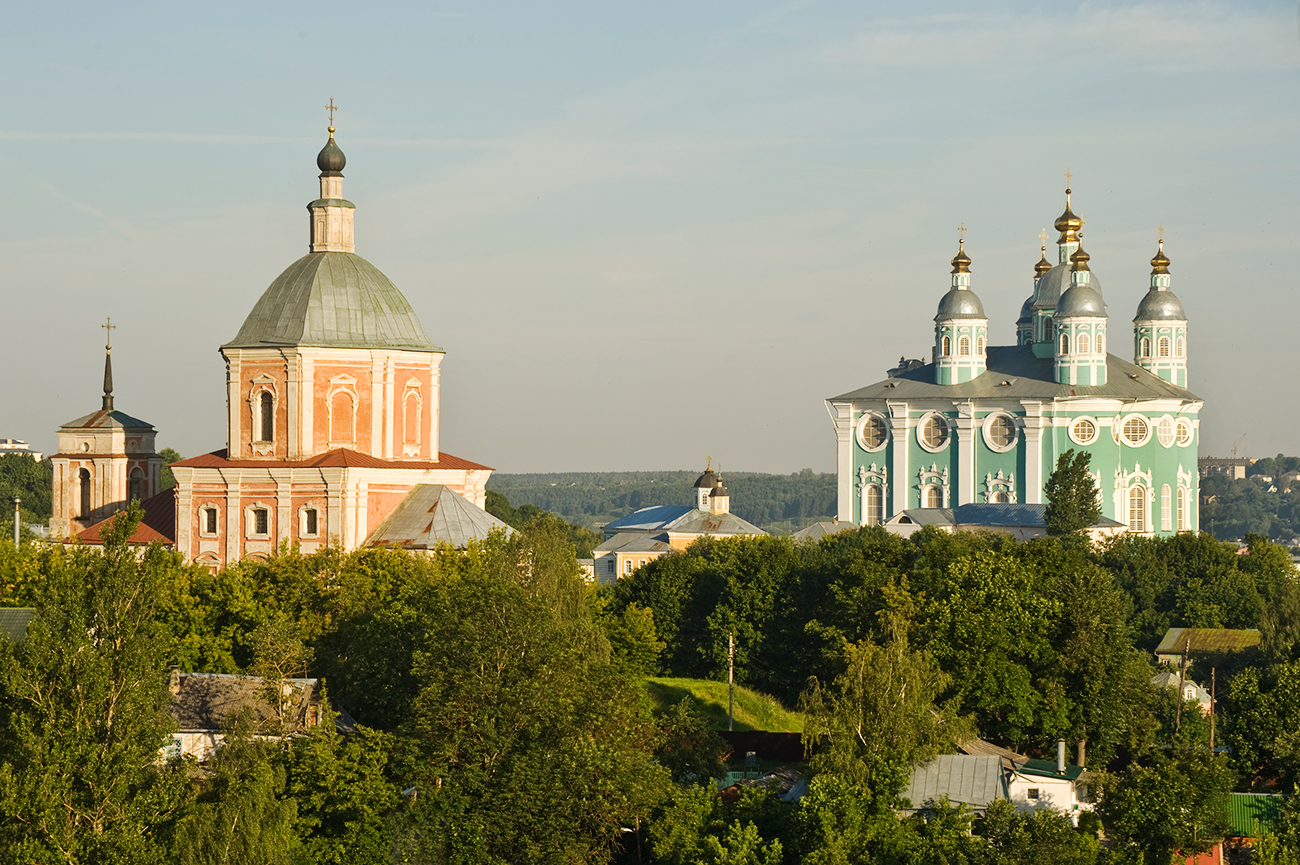 At the beginning of the 20th century, Russian chemist and photographer Sergei Prokudin-Gorsky invented a complex process for color photography (see box text below). Inspired to use this new method to record the diversity of the Russian Empire, he undertook a number of projects, one of which involved photographing sites linked to the centenary of the 1812 Napoleonic campaign against Russia. Of particular interest is the work he did during Summer 1911 in the city of Smolensk. The horrific siege of that city in mid-August 1812 was vividly described in Leo Tolstoy’s War and Peace.

Smolensk, which was first mentioned in medieval chronicles under the year 862, was home to numerous churches and monasteries. The most notable shrine was the central Cathedral of the Dormition of the Virgin, which Prokudin-Gorsky photographed from two distant perspectives, giving a sense of its commanding presence. Begun in 1101 by Prince Vladimir Monomakh (1053-1125), the Dormition Cathedral was completed in the 1140s by Monomakh’s grandson, Rostislav Mstislavich (1110-1167), who ruled in Smolensk from 1125 until 1160.

Virtually nothing remains of the original cathedral, which was severely damaged during a Polish siege in the early 17th century during the dynastic crisis known as the Time of Troubles. After the return of Smolensk to Muscovite control in 1654, a rebuilding of the Dormition Cathedral began on the same site. Construction difficulties lengthened the project from 1677 to 1740, with additional work continuing until 1772. Its present Baroque form, crowned with five cupolas, was created in the 1730s by Gottfried Schädel.

View from the southeast

Prokudin-Gorsky’s view from the southeast shows the three segments of the apse, which contains the main altar in the east part of the structure. The design of the façade reflects the influence of a baroque style that flourished in 17th-century Ukrainian church architecture. The upper tier is defined by unusual circular windows, and the low roof is crowned with five ornate cupolas. Miraculously, the cathedral escaped major damage during World War II, although its primary sacred object, the Icon of the Smolensk Mother of God, disappeared during the war. 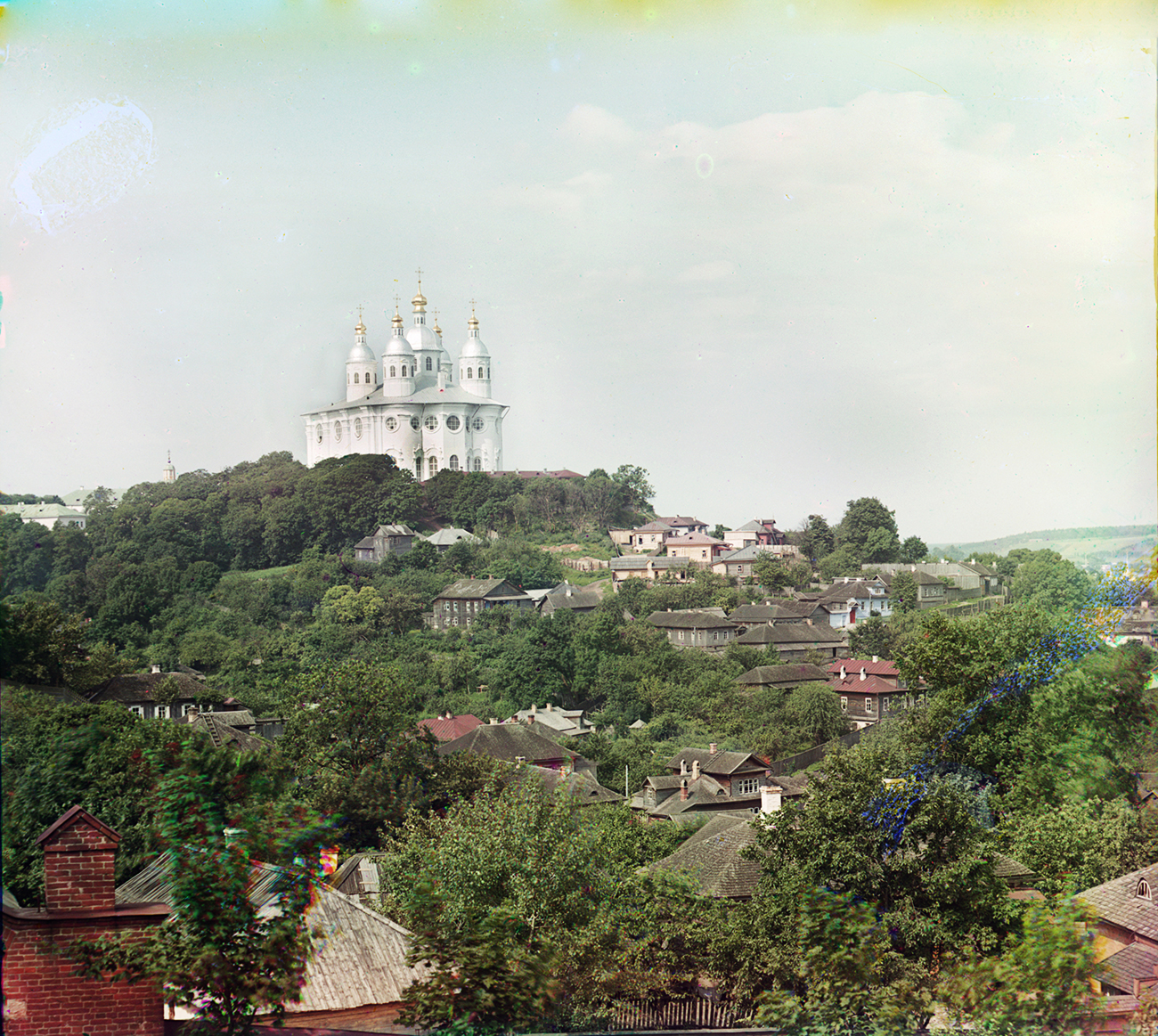 My southeast view was taken in 2014 from a slightly different perch on the east wall of the grand Smolensk fortress (near the Eagle Tower). Prokudin-Gorsky’s camera lens includes much of the cathedral hill, yet the image of the cathedral is softened by the hazy summer atmosphere. My telephoto lens allowed a tighter focus. 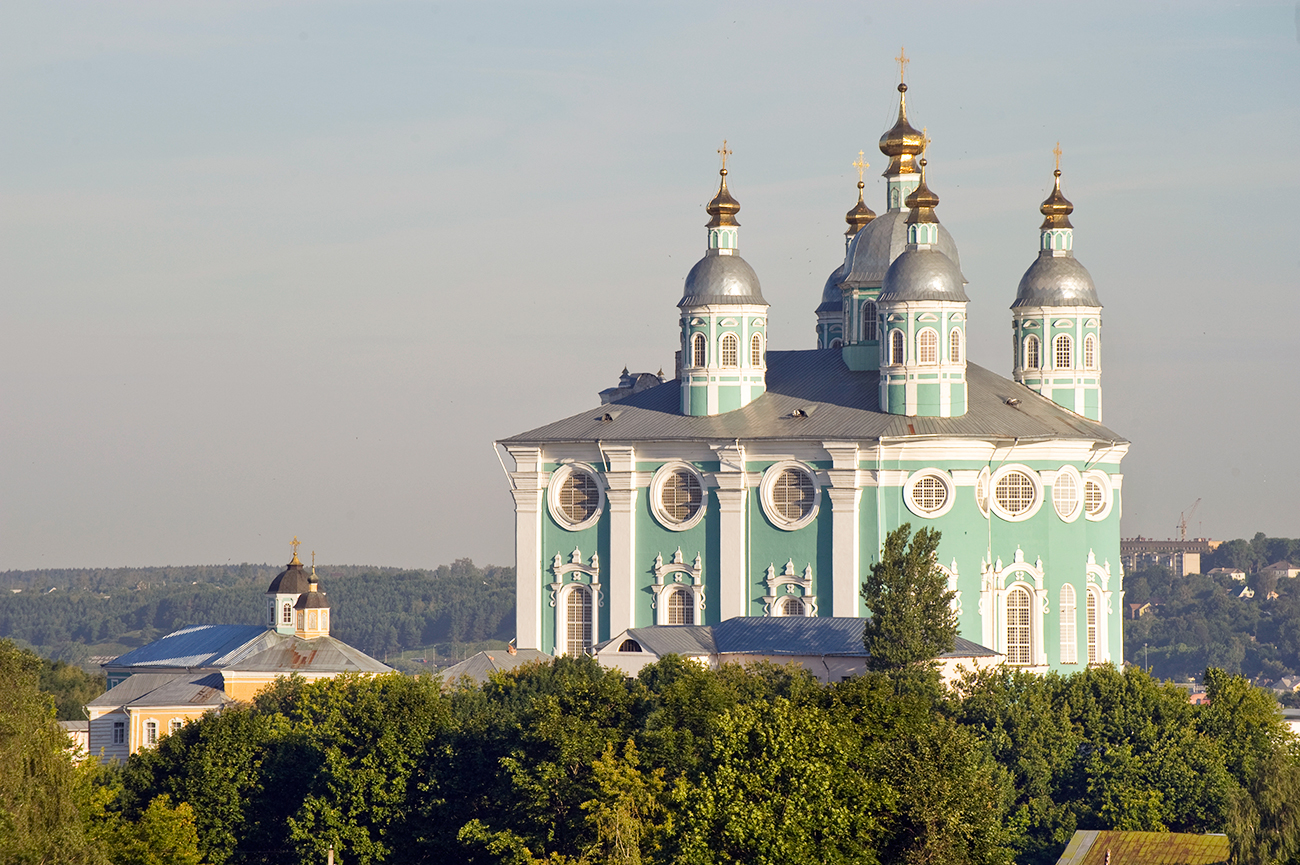 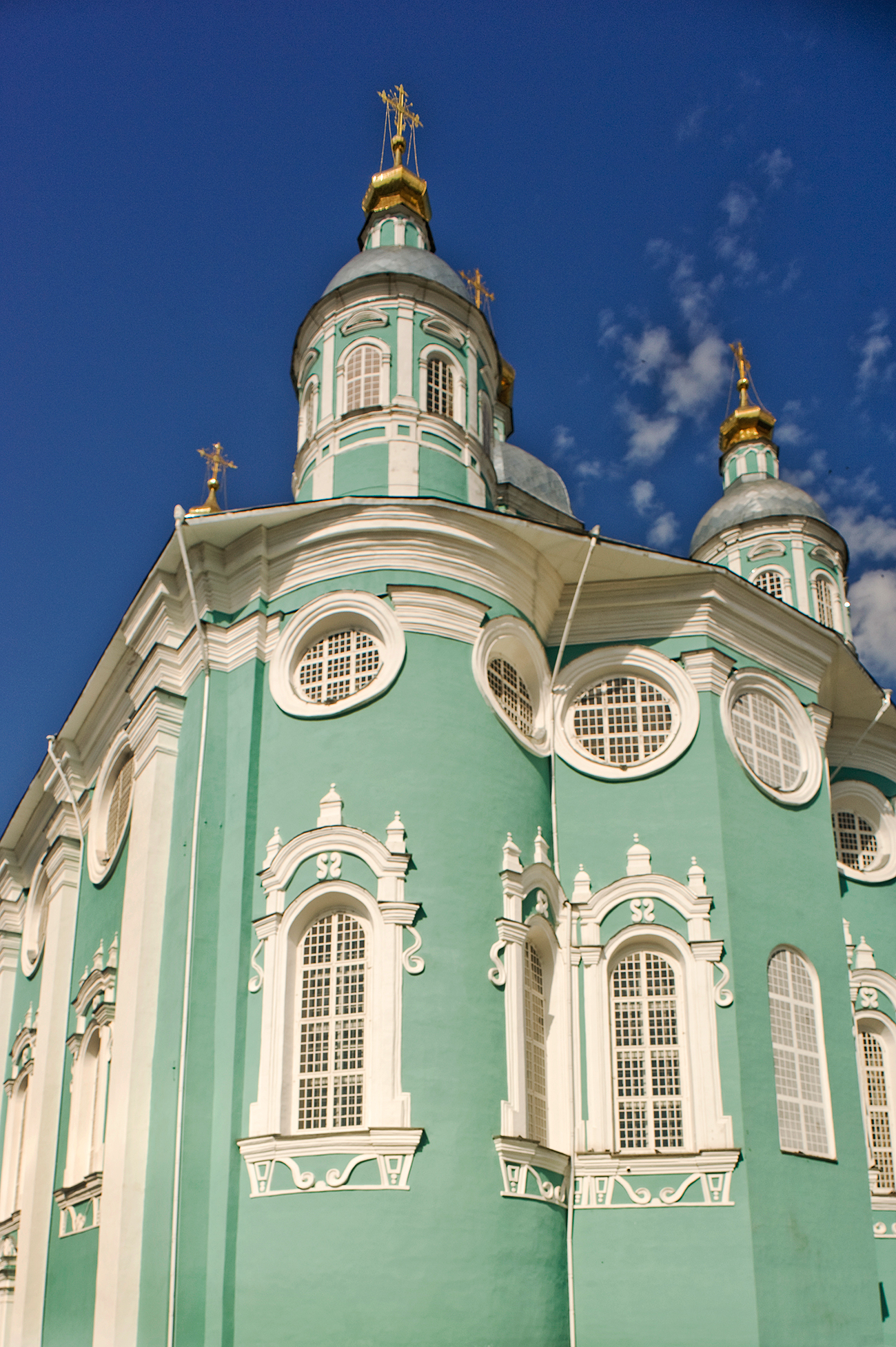 View from the northwest

Prokudin’Gorsky’s second view of the cathedral hill, taken from Kazan Hill to the northwest, shows the Dormition Cathedral’s northwest side. Visible in front to the left is the monumental bell tower, erected in 1763-72. In the foreground are wooden houses built on brick ground floors. A woman and children stand at a doorway on the lower left. My southwest view taken in 2006 near the Ascension Monastery shows part of the Dormition Cathedral in restoration scaffolding. My closer views in 2014 show details of the cathedral’s west façade and the bell tower. 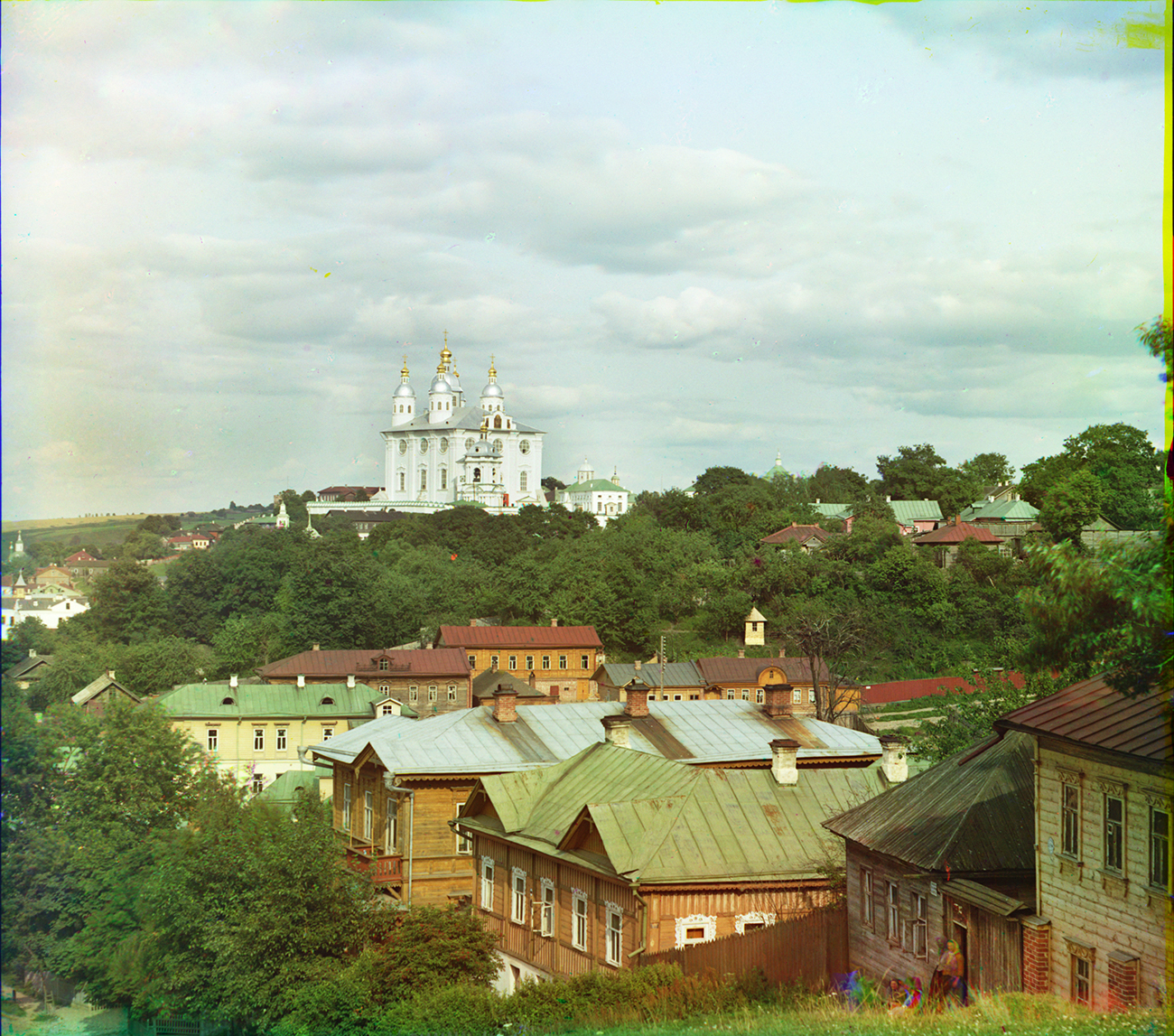 Although both of Prokudin-Gorsky’s views depict a bucolic landscape covered with verdure, Smolensk witnessed rapid urban growth at the turn of the 20th century. Russia’s general economic advance during this period had an impact on the city, and by the time of Prokudin-Gorsky's visit, it had become an important railroad hub with a population of some 70,000. 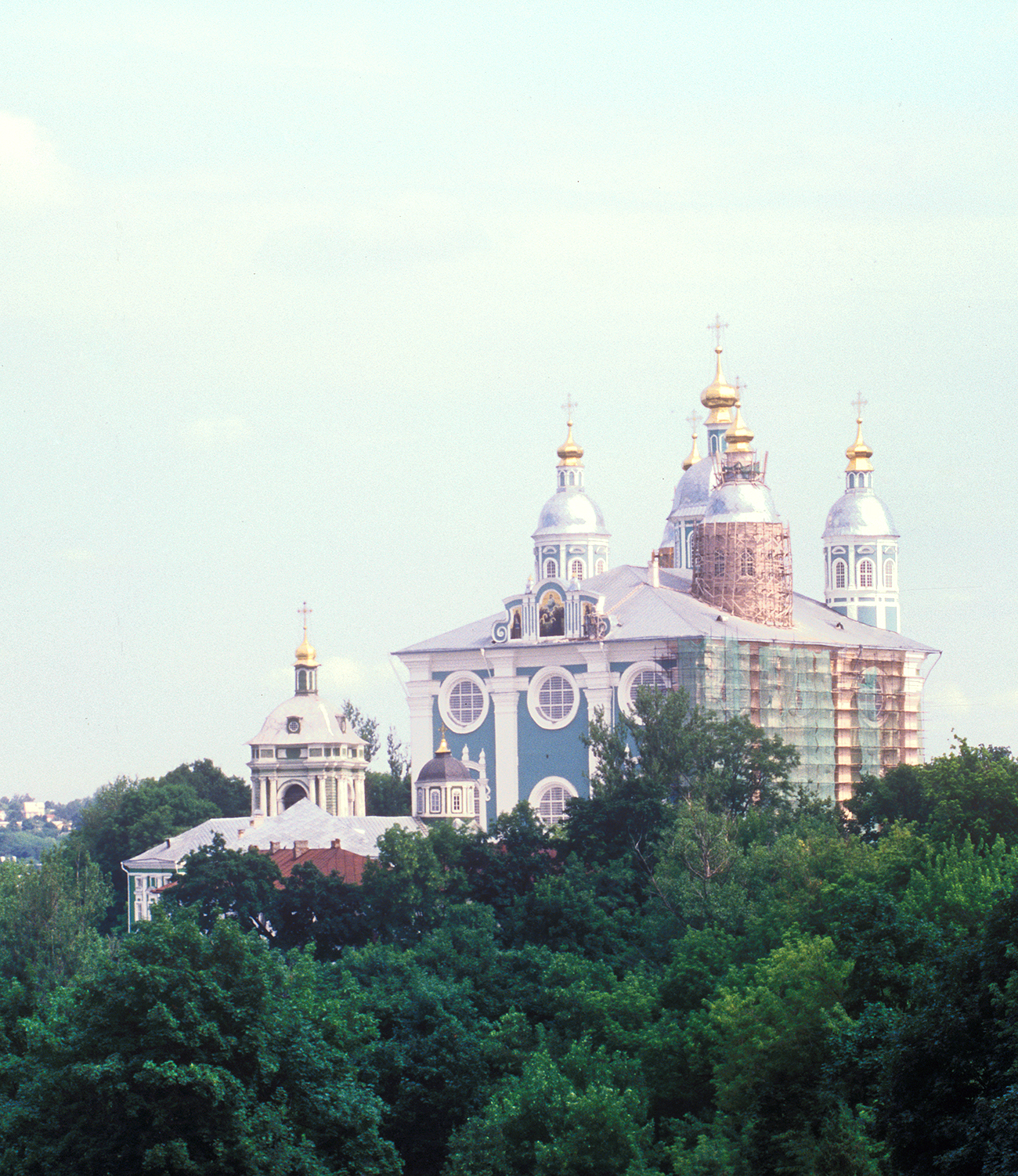 Smolensk found itself under attack soon after the German invasion of the Soviet Union began on June 22, 1941. The city suffered enormous material and human losses before its liberation by the Red Army in late September 1943. 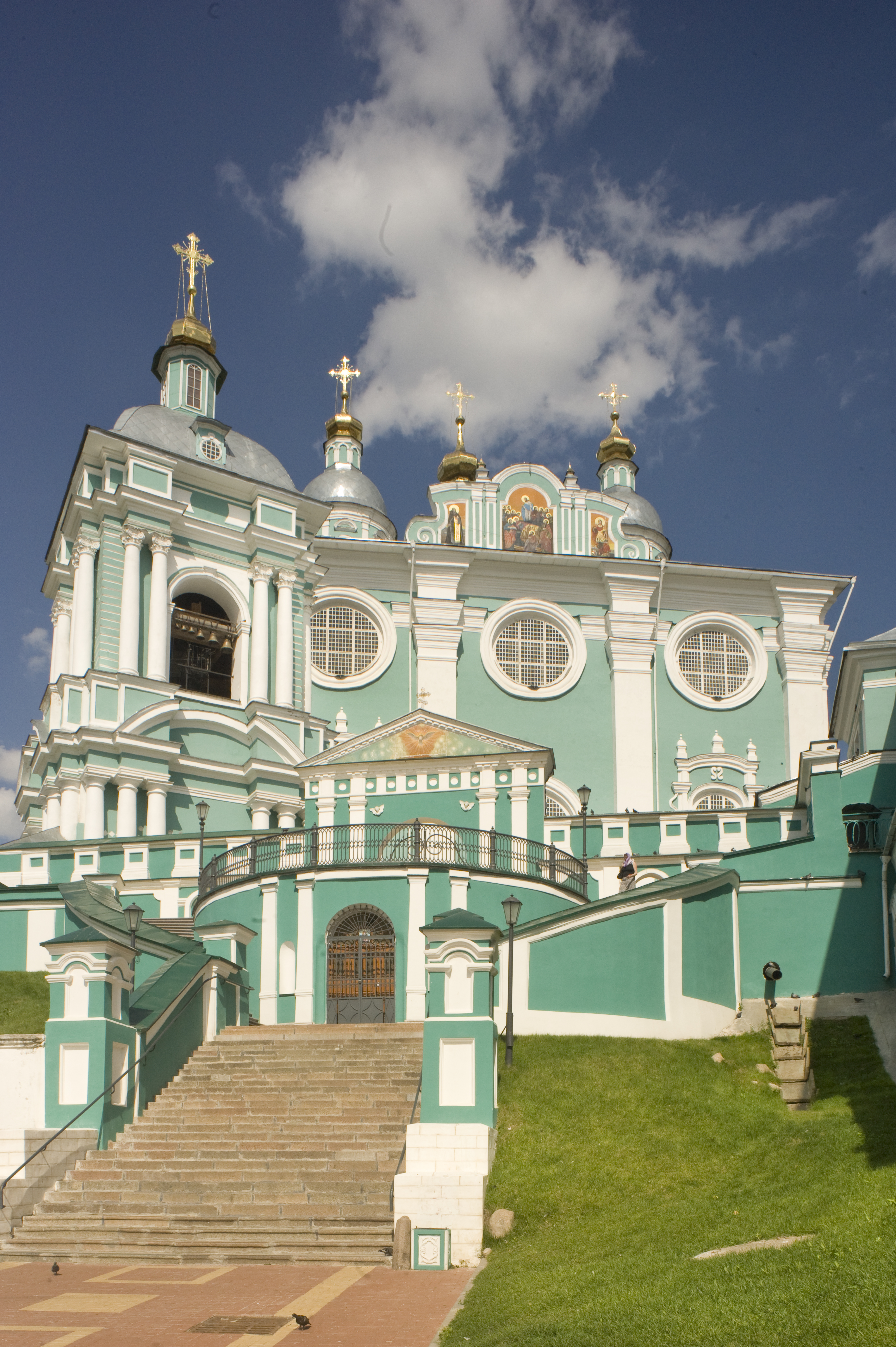 Despite the devastation of World War II, much of the historic central city, including many of its churches, has been carefully renovated. With a current population of almost 330,000, Smolensk is an administrative, educational and cultural center as well as the seat of a metropolitanate of the Russian Orthodox Church.

In the early 20th century, Russian photographer Sergei Prokudin-Gorsky invented a complex process for color photography. Between 1905 and 1916, he traveled through the Russian Empire and took over 2,000 photographs with the new process, which involved three exposures on a glass plate. HIs work created an important archive of the Russian Empire on the eve of the Revolution. In August 1918, he left Russia with a large part of his collection of glass negatives and ultimately resettled in France. After his death in Paris in 1944, his heirs sold his collection to the Library of Congress. In the early 21st century, the Library digitized the Prokudin-Gorsky Collection and made it freely available to the global public. A number of Russian websites now have versions of the collection. In 1986, the architectural historian and photographer William Brumfield organized the first exhibit of Prokudin-Gorsky photographs at the Library of Congress. Since 1970, Brumfield has photographed most of the sites visited by Prokudin-Gorsky. This series of articles will juxtapose Prokudin-Gorsky’s views of architectural monuments with photographs taken by Brumfield decades later.