Inside the Smolensk Dormition Cathedral: The mystery of the vanished icon 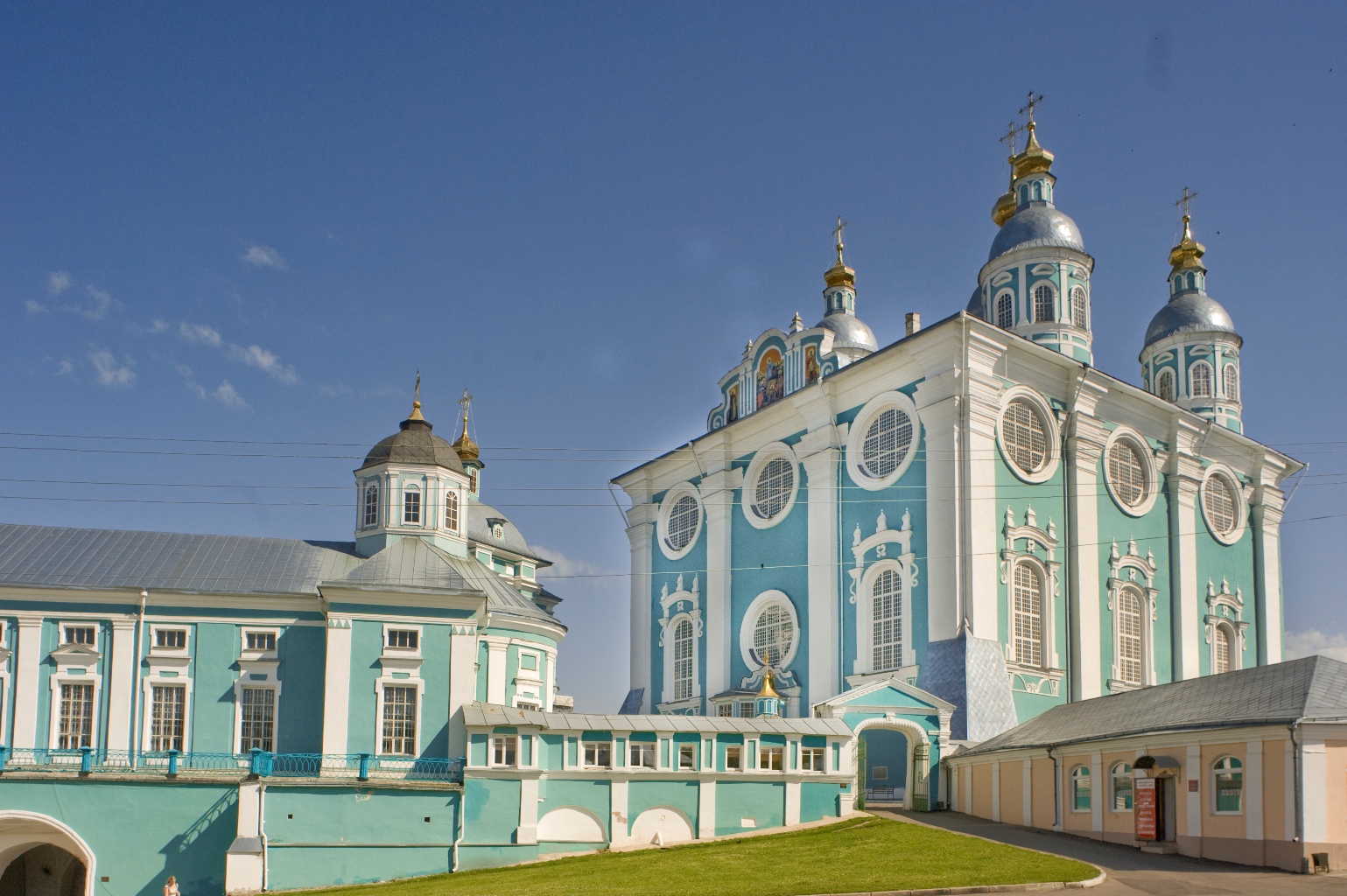 William Brumfield
This depiction of the virgin survived wars and occupations before it disappeared during World War II.

At the beginning of the 20th century, the Russian chemist and photographer Sergei Prokudin-Gorsky invented a complex process for color photography (see box text below). Inspired to use this new method to record the diversity of the Russian Empire, he photographed numerous historic cities. Prominent among them was Smolensk, which he visited in the summer of 1911 to document sites connected with the 1812 Napoleonic invasion. A century later, in 2006 and 2014, I photographed the same site.

The presiding visual motif of Smolensk is the monumental Cathedral of the Dormition of the Virgin, situated on a hill in the center of the city. Prokudin-Gorsky not only photographed the exterior but also entered the cathedral, where he photographed its most sacred shrine — the Smolensk Icon of the Mother of God. That photograph has acquired exceptional importance, not only because of its technical challenges (a shadowed interior with only natural light) but also because the icon disappeared at some point during the two years of German occupation from mid-July 1941 to late September 1943.

Every Orthodox icon is sacred, but the original of Our Lady of Smolensk was especially venerated. Traditional Orthodox narratives state that the icon was among those painted by St. Luke. It defined the form known as Hodegetria (from the Greek for “She who points the way”) in which Mary holds the Christ Child on her left arm and points to the infant with her right hand. 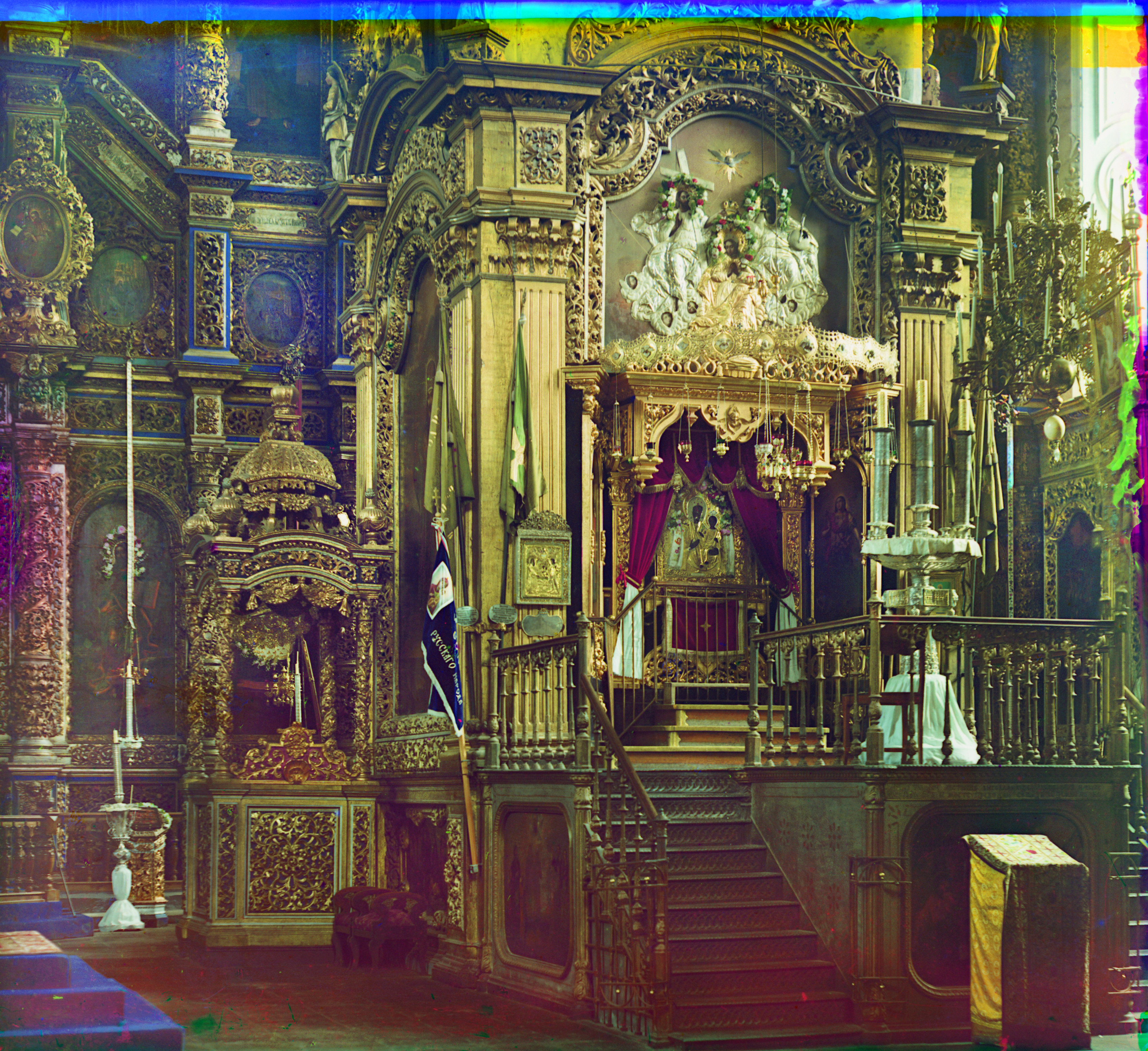 Through imperial patronage, the image made its way from Jerusalem to the Blachernae Church of St. Mary in Constantinople under the protection of Empress Pulcheria (398-453), canonized by both the Catholic and Orthodox Churches for her role in consolidating early Christianity. According to church accounts, Byzantine Emperor Constantine IX Monomachos gave the Hodegetria Icon to his daughter Anastasia (or Anna; the precise name is unclear) in 1046 on the occasion of her marriage to Vsevolod, son of Kievan Grand Prince Yaroslav the Wise. 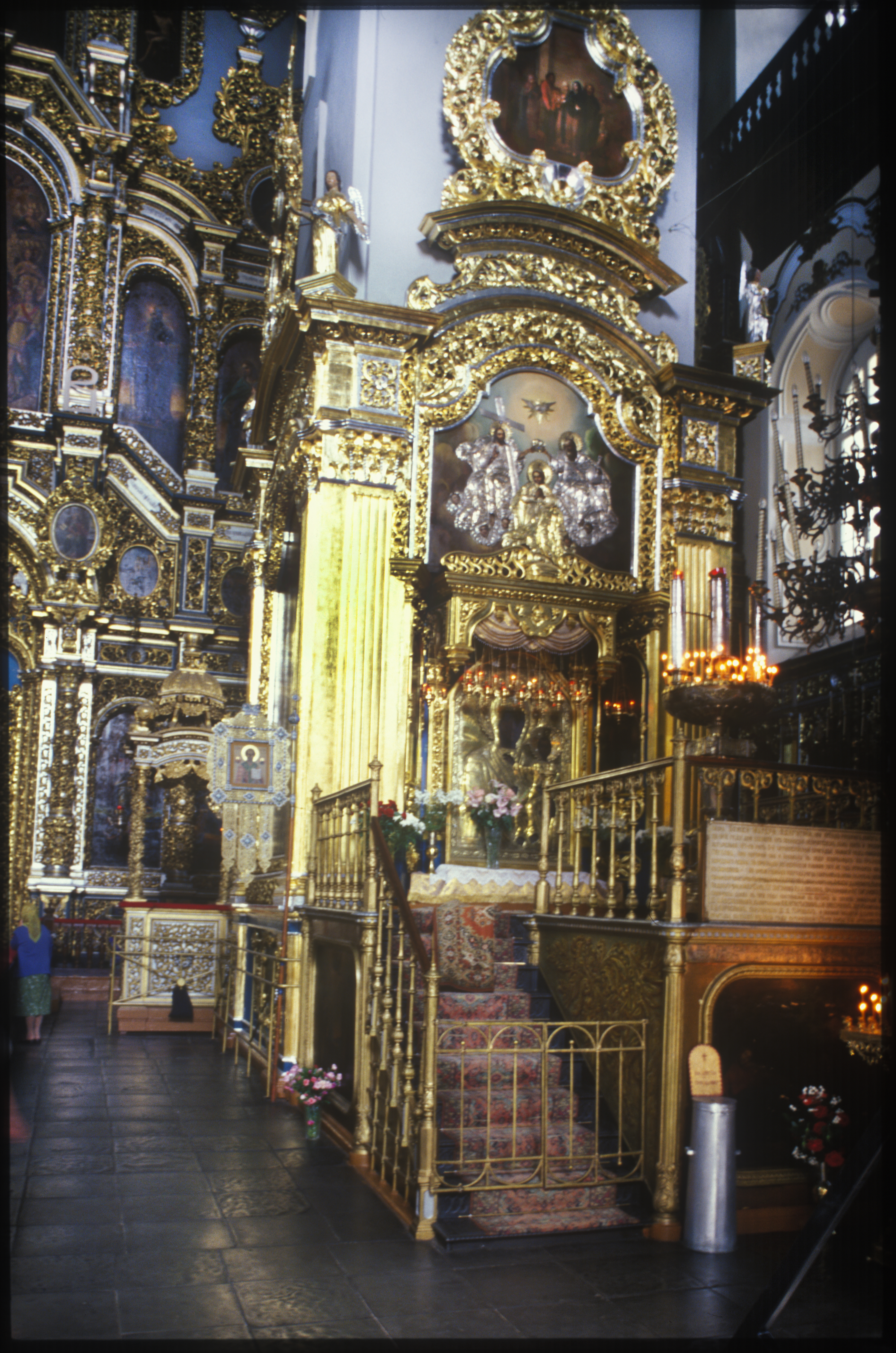 After Vsevolod’s death, the icon was inherited by his son Vladimir II Monomakh (1053-1125; the Byzantine name inherited from his mother), who played an enormous role in expanding the power and territory of medieval Rus. Around 1095, Vladimir transferred the icon from Chernigov, his original principality, to Smolensk, where in 1101 he initiated the construction of the original Cathedral of the Dormition of the Mother of God. The icon was eventually installed in the cathedral, which was completed in the 1140s by Monomakh’s grandson, Rostislav Mstislavich (1110-1167), who ruled in Smolensk from 1125 until 1160.

The cathedral and the icon miraculously survived a Mongol attack in 1239. In 1398 the icon was brought to Moscow by Princess Sophia, bride of Grand Prince Vasily I, son of Dmitry Donskoi. The icon remained in the Kremlin Annunciation Cathedral until 1456, when at the request of the bishop of Smolensk, the Hodegetria Icon was returned by Grand Prince Vasily II. Before its return to Smolensk, a faithful copy of the icon at the same size was made for Kremlin Annunciation Cathedral, where it stayed until 1525, when it was transferred to the newly built Cathedral of the Smolensk Icon of the Mother of God at Moscow’s Novodevichy Convent. 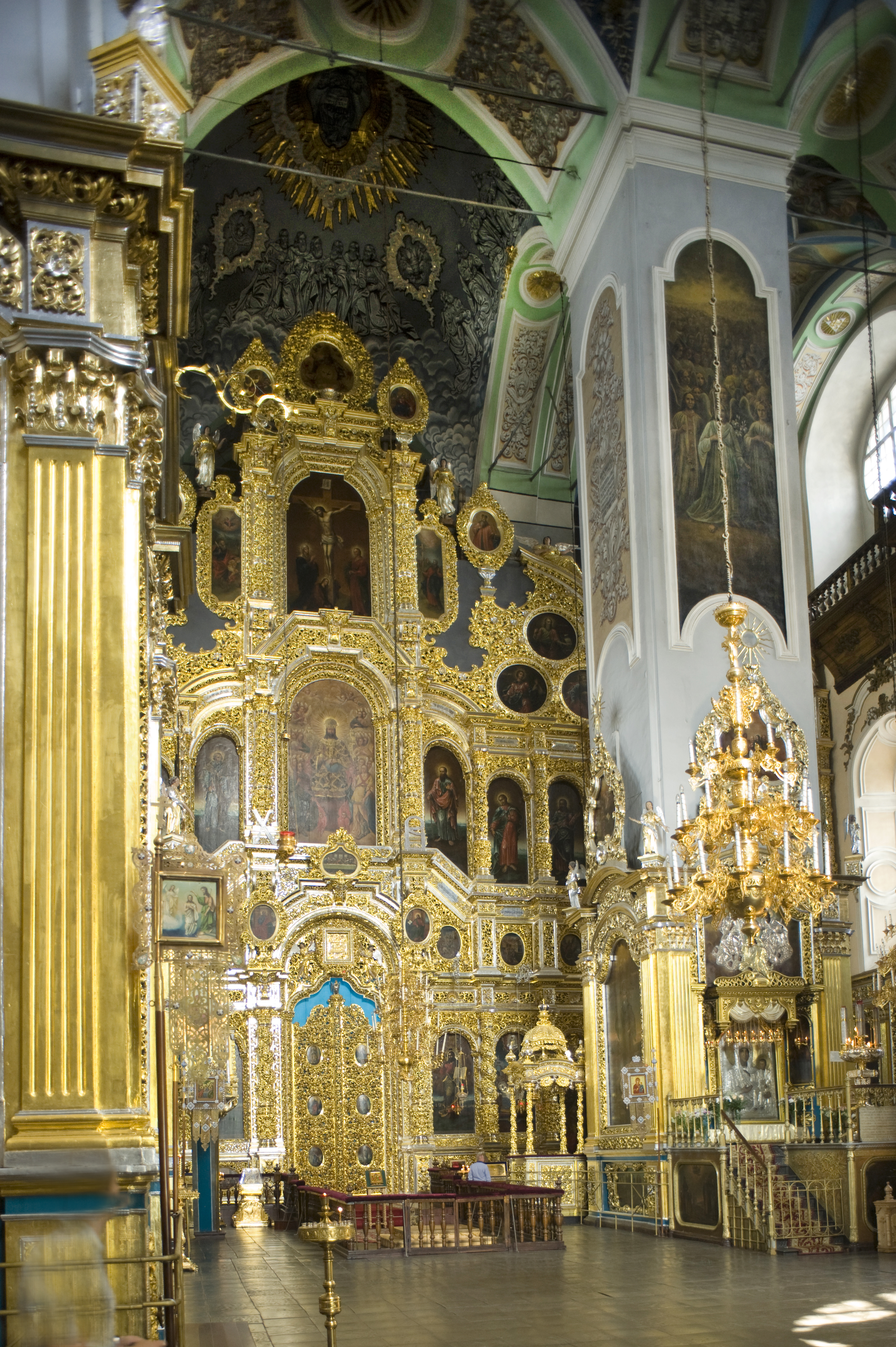 In the early 17th century, the Smolensk Dormition Cathedral was severely damaged in a Polish siege during the catastrophic dynastic crisis known as the Time of Troubles. Again, the icon survived. After the return of Smolensk to Muscovite control in 1654, a rebuilding of the Dormition Cathedral began on the same site. Construction challenges extended the project for decades until completion of the interior in 1772.

A grand interior for a grand facade

The main work was done in the 1730s and 1740s, when the cathedral acquired its present form, strongly influenced by the Ukrainian Baroque. The Baroque style is particularly evident on the interior, which features a magnificent icon screen whose carved, glided frame and tiers of icons were created by a group artists and craftsmen headed by the Ukrainian master Sila Trusitsky. A portion of the first tier is visible in the background of Prokudin-Gorsky’s photograph. My photographs, taken in 2006 and 2014, convey a sense of the grand scale of the iconostasis. 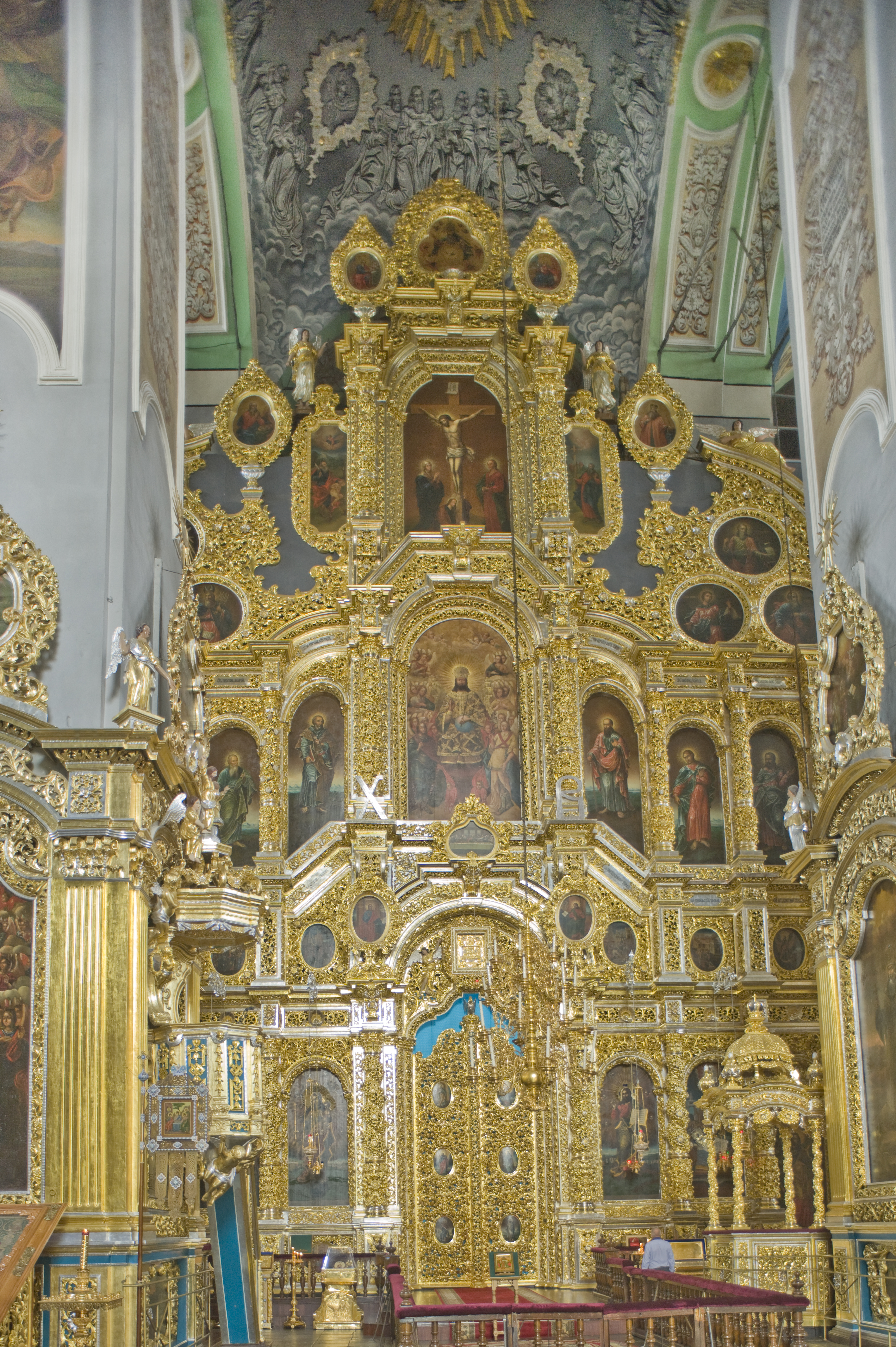 The interior was further enhanced by the creation in 1743-46 of elaborately carved baldachins and icon cases (kiot) situated near the icon screen and at the base of the cathedral’s mighty piers. The most notable of these spaces contained the Smolensk Icon of the Mother of God.

In early August 1812, the Smolensk Icon was evacuated to Moscow as Napoleon’s army advanced. Before the epochal Battle of Borodino, the icon was displayed in a procession at the Kremlin walls. When Moscow itself was threatened, the Smolensk Icon found refuge in Yaroslavl. Improbably, the Dormition Cathedral remained unscathed during the furious assault on Smolensk and was guarded from looting until the French abandoned Smolensk in October. In November 1812, the Smolensk Icon with its intricate metal overlay was returned to the Dormition Cathedral, where Prokudin-Gorsky photographed it almost a century later. 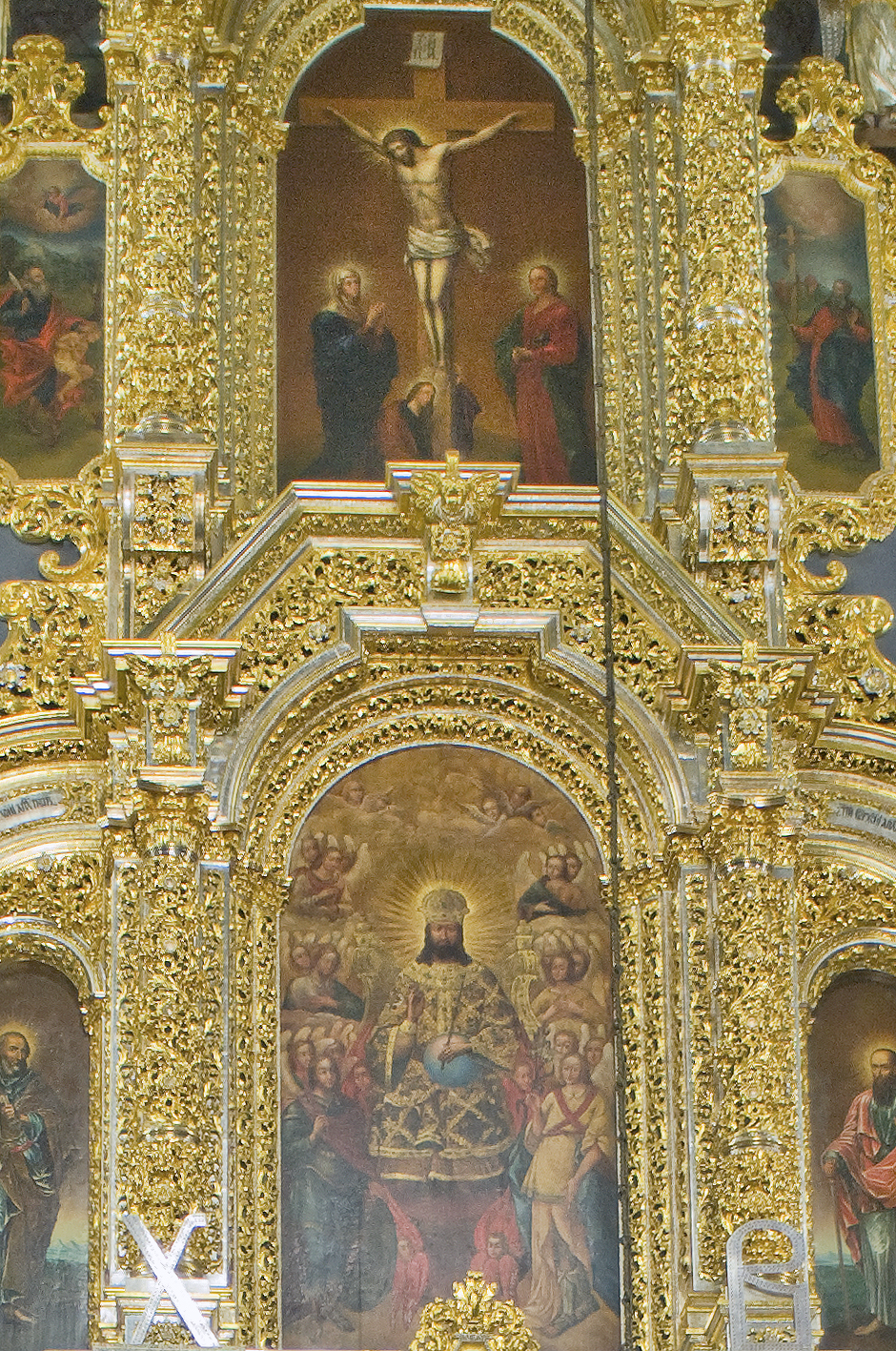 Again defying all odds, the Smolensk Dormition Cathedral survived two prolonged battles in 1941 and 1943. During 26 months of German occupation, the cathedral was closed and guarded, but its miraculous icon was missing when the largely ruined city was retaken. Not only was this a great loss for Russian culture, but the disappearance also meant that the ancient object was never studied with advanced scientific methods.

The space containing the original Smolensk Hodegetria Icon is now occupied by a copy painted in 1602 for a nearby church located over the Dnieper River Gate in the Smolensk fortress north wall. My photographs from 2006 and 2014 included views of the baldachin, or canopy, within which this faithful copy remains an object of profound veneration.

In the early 20th century the Russian photographer Sergei Prokudin-Gorsky invented a complex process for color photography. Between 1905 and 1916 he traveled through the Russian Empire and took over 2,000 photographs with the new process, which involved three exposures on a glass plate.In August 1918 he left Russia with a large part of his collection of glass negatives and ultimately resettled in France. After his death in Paris in 1944, his heirs sold his collection to the Library of Congress. In the early 21st century the Library digitized the Prokudin-Gorsky Collection and made it freely available to the global public.A number of Russian websites now have versions of the collection. In 1986 the architectural historian and photographer William Brumfield organized the first exhibit of Prokudin-Gorsky photographs at the Library of Congress. Over a period of work in Russia beginning in 1970, Brumfield has photographed most of the sites visited by Prokudin-Gorsky. This series of articles will juxtapose Prokudin-Gorsky’s views of architectural monuments with photographs taken by Brumfield decades later.