Russia’s journey from “no invalids” to Paralympic champions 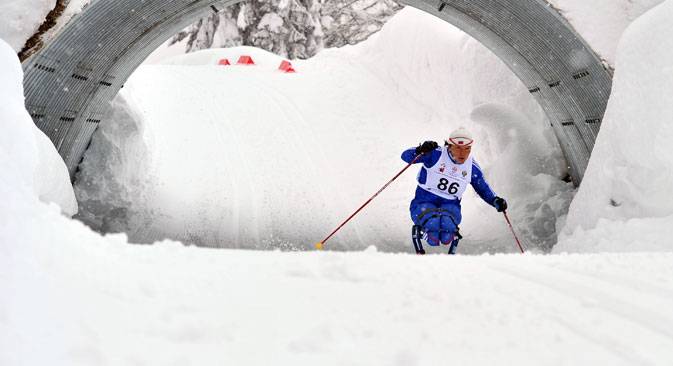 Paralympic athlete Irina Polyakova took third place in the 2.5 km race among those with lesions of the musculoskeletal system LW 10-12 category in the Russian championship of cross-country skiing. Source: Vladimir Pesnya / RIA Novosti

Russia refused to host the Paralympic games in 1980, but today the country’s disabled athletes are the subjects of a poster campaign in the Moscow metro. Will the new visibility improve life for Russia’s disabled population?

As the 1980 Moscow Olympics approached, a Soviet official was asked whether his country would host that year’s Paralympics for the first time.

“There are no invalids in the U.S.S.R.!” he thundered back, a phrase that went down in history.

The 1980 Paralympics were held in the Netherlands instead.

Russia has come a long way in 34 years - in March, just after the Olympics, the country will host its first Winter Paralympics in Sochi, and as reigning champions of the medals table, no less.

That’s an inspirational story, but the Paralympics are full of them.

You may remember Alex Zanardi, the champion racecar driver who lost both his legs in a horrific 2001 crash but won gold as a Paralympic cyclist last year in London. In a neat twist of fate, the race was held at Brands Hatch auto track, where Zanardi had raced many times in his past career, but never won.

Possibly the most dominant athlete in history, Esther Vergeer won 42 Grand Slams and seven Paralympic tennis gold medals before retiring last year on a 470-match unbeaten streak. Oh, and she also found time to smash down more barriers with a sultry naked photo shoot in her wheelchair for the cover of ESPN Magazine.

Now Russia is recognizing the power of inspiration with an omnipresent poster campaign in the Moscow metro featuring some of the country’s Paralympic heroes. The slogan is a play on the common Russian phrase “a person with limited opportunities,” a euphemism for disability. Instead, the poster declares: “Everyone’s opportunities are limitless!”

It’s a fine start, but inspiration on its own isn’t enough. Last year’s London Paralympics were a case in point. This August, a major survey found 81 percent of British disabled people felt no benefit from the Games, while access to disabled sports facilities remains patchy.

Russia’s Sports Ministry, which always loves gold medals, is pouring funding into elite disabled sports, but there’s not much available for the many people whose trip to the nearest grocery means an undignified haul up and down steps.

By law, buildings in Russia are supposed to have disability access, but most don’t. Russian bloggers collect photos of half-hearted efforts to comply - wheelchair ramps built at 45 degrees or leading into a wall – in online photo galleries that are sometimes funny but always heartbreaking.

Russia has a large population of disabled people, but often they are invisible, shut away in apartments or state institutions. Even on the current poster campaign, careful cropping ensures the athletes’ faces are shown but not their disabilities.

Things are getting better, however, and the Paralympics are helping.

To start with, it was nothing to write home about - even in Sochi, just two buildings were included, one of them the offices of the Games’ organizing committee.

Since then, it has quietly blossomed. Activists across the country have added thousands of sites in dozens of cities. It’s far from perfect - the Siberian city of Irkutsk, home to 600,000, oddly does not have any buildings marked at all - but it’s a promising development.

More access means more visibility for ordinary disabled people, and the same is true for athletes.

For years, Russia’s Paralympians beat the world’s best, but you’d be hard pressed to find them covered on any major TV network. The London Games marked a watershed, with dedicated broadcasts appearing for the first time, and there is no way for state TV to ignore a Paralympic Games taking place at home.

For decades, Russia has had an uneasy relationship with its disabled population. Many of them are injured veterans of the Chechen wars or the Soviet war in Afghanistan, chapters of history that many would prefer to forget, even as many of those same veterans win gold medal after gold medal.

Now circumstances are forcing a rethink. Russia’s Olympic ambitions mean hosting the Paralympics too - and, hopefully, an end to invisibility.

From “no invalids” to champions in 34 years - now that’s inspiring.