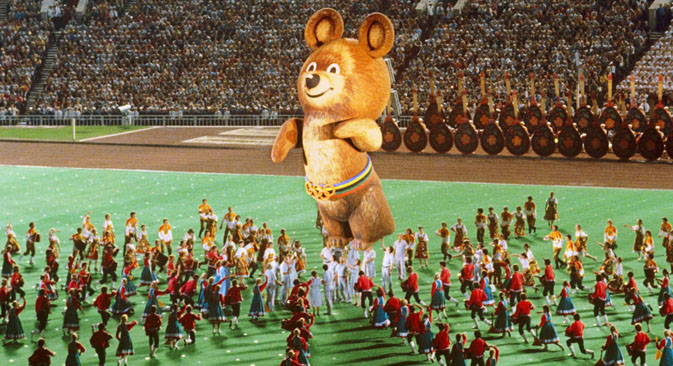 The symbol of the Moscow Olympics, Misha the bear, flew out with balloons into Moscow’s night sky. Source: RIA Novosti

Despite the American boycott, the success of the 1980 Summer Olympics in Moscow left a lasting legacy.

In 1980, Moscow became the first Eastern Bloc capital to host the Olympic Games. That historic decision was taken on October 23, 1974, at the 75th session of the International Olympic Committee in Vienna. Before the final voting, the runner-ups were Los Angeles and Moscow. In the end, the Soviet capital won with 39 votes against 20.

From that moment, the country began large-scale preparations for its first ever Olympics and for the first in the history of the USSR Olympic torch relay. The torch started on June 21 in Athens, and ran through Communist Bloc countries via Sofia, Bucharest, Chisinau, Kiev, Kharkov, culminating in Moscow.

Opinion: What the Sochi Olympics mean to Russia

The USSR had just five years to prepare for the 1980 Olympics and during that time, the organizers managed to do the impossible. In a matter of several years, more than 90 Olympic facilities were built, including the Olimpiysky sports center, a rowing canal and velodrome in Krylatskoye, Sheremetyevo-2 airport, the Cosmos hotel, the Olympic village, a new building at the Ostankino TV center, and the Olympics press center, which now houses the RIA Novosti news agency.

In addition, the Izmaylovo hotel complex was built, which made it to the Guinness Book of Records as Europe's biggest hotel with a capacity to house 10,000 guests. Topping off the construction spree was the country's largest stadium, Luzhniki.

The Moscow underground, too, was given a facelift for the Olympics. To foreign visitors it seemed like a real museum, beautiful and grand. Its impressive looks were supplemented with fast escalators and electronic clocks showing the exact time to the second.

The lighting was also improved, with new fluorescent lamps used in the carriages. Station announcements were done in two languages, Russia and English; while travelcards had inscriptions in English, German and French.

What will happen to the Olympic stadiums after the Sochi games?

Most of the facilities built for the 1980 Olympics continue to be effectively used up to this day, thus proving the thesis that the legacy of the Games serves the people for years after the original event. Indeed, Sheremetyevo-2 airport is now one of Moscow's main air hubs; the Ostankino TV center is used to 100 percent of its capacity, as is the Cosmos hotel.

There is a widely held view that in order to build the infrastructure for the 1980 Olympic Games, the USSR had to resort to large-scale borrowing abroad. That is not true.

In order to raise funds for the "construction project of the century" and not to undermine the budget, the country's leadership took an unconventional decision, at least for the Soviet economic system: It would hold a national sports lottery.

There were eight draws held across the whole of the USSR Half of the revenues generated by the lottery went to fund preparations of the Soviet republics' teams for the games. Thus millions of people took part in the Olympics lottery, making their contribution to the 1980 Summer Games.

The creation of the 1980 Games' legacy, especially when it came to new technologies, was hugely assisted by the boycott of the Olympics by the world's leading technology companies. Originally it was planned that equipment for live TV transmissions would be supplied and installed by leading American specialists.

However, the boycott by the United States meant that the Soviet Union had to resolve all the issues by itself. As a result, television studios, video cameras, VCRs and monitors were manufactured by Soviet factories. Their success was best of all demonstrated by the high marks Soviet-made equipment received from foreign colleagues from leading TV and radio companies.

Everybody noted the improvements undertaken in Moscow ahead of the Games, as well as a surge in patriotism and enthusiasm for sports generated by the Olympics.

"Everything was impeccably clean, there were smartly dressed people in the streets… Everything was organized at the best possible level," said Tatyana Kochergina, an 1980 Olympic champion in handball.

"Foreign athletes too were impressed by how well the Moscow games were organized. For instance, Elisabeth Max-Theurer, the 1980 Olympic champion in Individual Dressage from Austria, admitted that she was in tears when "the big Russian bear was floating away into the sky" at the closing ceremony.

By the way, the symbol of the Moscow Olympics, Misha the bear, is still considered to be one of the best sports mascots in the history of the Games in terms of the emotional impact and memories it left.

For the people of the Soviet Union, the Olympic Games became the main sporting event of their lifetime, presenting them with an opportunity to become part of Olympic history, to showcase their country's culture for the rest of the world to see.

Internationally, the Moscow Olympics considerably boosted the Soviet Union's image on the political arena. Contrary to expectations, the USSR demonstrated its ability to conduct global-scale events.

In the economic sphere, long-term contracts were signed with partners both in the West and in the East, which served to improve the Soviet Union's relations with other countries. Yet, the main outcome of the Games was that a curtain of mistrust and misunderstanding was lifted: the 1980 Olympic Games allowed thousands of foreigners to see the USSR with different eyes.

When summing up the results of the Moscow Games at a session of the IOC Executive Board in Lausanne in October 1980, the newly elected chairman of the International Olympic Committee, Juan Antonio Samaranch, said that the 1980 Summer Olympics had set a new benchmark for holding further games in terms of the quality of organization and technical support, the cultural program and working conditions for the media.