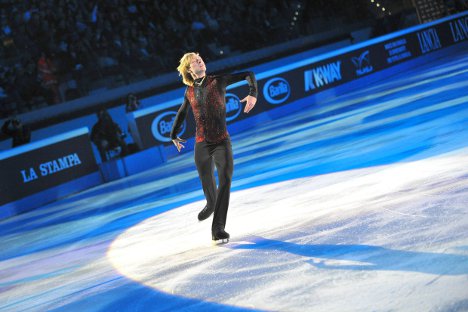 Check out the veterans and newcomers who hope to help Russia win gold.

Team Russia hopes to walk away with plenty of medals at the Sochi Games – and not just thanks to the home field advantage. Many of Russia’s top athletes are participating in their second, third or even seventh Olympics. Others are Olympic newcomers, but with plenty of international competition victories under their belts.

The Sochi Games will be the fourth Olympics for 31-year-old Pluschenko, and there is plenty of speculation about his condition. The champion of the Turin Games is recovering from a back injury that he sustained in January during the European Championships in Zagreb.

But after 10-months off the ice, he won the Volvo Cup tournament in Riga at the beginning of November. Pluschenko’s coach, Alexei Mishin, promises that Sochi spectators will see the classic Pluschenko and that he will be the one to beat for the men’s figure skating title.

Nikita Kryukov is remembered by many for his stunning sprint finish at the Vancouver Games, when he left behind the favorite, Norwegian Peter Northug. Kryukov’s performance in subsequent competitions showed that his Olympic victory wasn’t a fluke.

In 2013, he became the world champion in the individual and team sprint races. At the Olympic Games in Sochi, the Russian athlete has every the chance to become the first two-time Olympic champion in the cross-country sprint.

Ekaterina Tudegesheva, a native of Siberia, began her career as a skier. But the decision to switch to snowboarding was obviously a good one for her. In 2003, at the age of 14, she was among the top 20 at the world snowboarding championship in Kreischberg, Austria.

Now the thousands of young snowboarding Russians are looking to Tudegesheva to raise the profile of the sport in their country. The best chance of success for Tudegesheva in Sochi lies in the parallel slalom where she is already a two-time champion.

Ivan Skobrev is the most decorated skater in modern Russian history, but he is hoping to do better in Sochi than the silver and bronze medals he won at the Olympic Games in Vancouver.

The skater from Khabarovsk is rightly considered one of Russia’s best Olympic hopes. He's ready to compete for medals at both the 10 and 5 km distances and at shorter distances as well.

The reigning world skeleton champion will start the new season on Nov. 26 in Calgary, Canada. The Vancouver Games bronze medalist loves North American tracks, which are considered to be the most dangerous.

However, he’s not too concerned about the results of this first tournament, since the 28-year-old Siberian is training to be in his best shape in February. Tretyakov's main rival in Sochi will be Latvian Martins Dukurs.

Although the favorites to win gold in Sochi are German Miriam Goesner and Norwegian Tora Berger, Russian athletes should not be completely written off. Olga Zaitseva, who at 35 will start out as a leader of the Russian national team, was the Olympic champion in Turin and Vancouver and she may well be the victor in front of the home crowd.

Officials from the Russian biathlon association worked hard to persuade Zaitseva to postpone her retirement until after the Sochi Games.

At the Olympics Games in Vancouver, Russia figures skaters had to go home without a gold, but in Sochi, nothing less than victory will be expected from the Russian team.

Russia’s best chance of success in the sport lies with the pair Tatiana Volosozhar and Maxim Trankov.

These World and European champions started the new season with clear victories in Germany, the United States and Japan.

At the Olympics, they will be free skating to music from the rock opera "Jesus Christ – Superstar.”

In his first season competing for the Russian team after receiving his citizenship in 2011 (and taking the name of Viktor), An won three stages in the world Cup and silver in the world championship in 500 meters. In Sochi, An, who won three golds in Turin, hopes to add to his stash.

In Sochi, the 42 year old luger Albert Demchenko will set a new record. These will be the seventh Olympic games of his career. In his first three outings, Demchenko competed in the double sleigh, but he prefers the single sleigh.

The veteran has never won Olympic gold; a silver in Turin remains the highest achievement of his career. Demchenko will retire after Sochi, so this may be inspiration enough to take him over the finish line first.