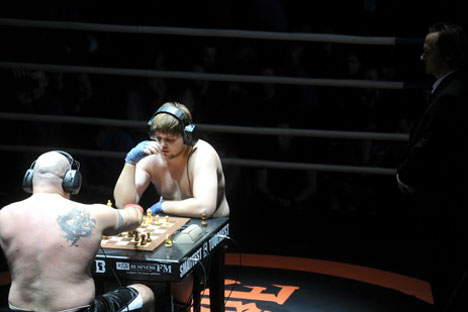 After a three-minute boxing round in the ring, athletes duke it out at a chessboard, and then again put on their boxing gloves.

It may not sound logical, but a new, emerging sport is combining the power needed for boxing with the brains needed to win in chess. Chessboxing started 10 years ago and is still perceived as something exotic.

Dutch artist Ipe Rubingh developed the idea to cross the two sports, which usually contradict each other.

Since 2003, chessbox amateurs have beat each other over the head, then get their heads in order before concentrating on the chessboard. Both events take place in the ring.

Despite its odd combination of skills, the sport is catching on. Moscow recently hosted one of the odder sports competitions: the Chessboxing World Championships.

Chessboxing consists of 11 rounds – six in chess and five in boxing. Each series lasts three minutes.

To succeed in chessboxing, competitors need to think fast. They must play in high speed - the sort of chess where every second counts. If a fighter cannot make a move for a long time, a warning from the referee spurs him on.

The frequently changing environment is the most attractive side of chessboxing, some competitor say. After an intense round of boxing, athletes have only one desire - to regain their breath. So sometimes pieces on the board start moving on an unfamiliar path, and the button on the clock is "jammed." The same referee helps the fighters not  to go astray.

For real grandmasters such episodes, of course, are not encouraging, but they are clearly fun for others. The same men, who in spite of everything can keep themselves orientated in space, are rightly called the strongest and most intelligent people on the planet.

Ipe Rubingh at one time was the first world champion in the sport he discovered. Again and again Rubingh said Russia is of great interest for his project.

"Boxing and chess are in the Russian blood,” Rubingh said. “You have a lot of champions in chess and in the ring."

It’s not only that Russians like to think and love to fight. Like any young sport, chessboxing needs sponsors. Now athletes are paid modest fees - no more than $3,000 plus travel expenses. Chessboxing competition in Moscow is transitioning to a professional level. And since tickets for the event cost from 1,500 to 18,000 rubles, Rubingh said he believes there is a good chance of findong an investor in the auditorium among the fans.

The main Russian chessboxing player is 100-kilogram Siberian Nikolay Sazhin, who holds the heavyweight title. Outside of the ring, Sazhin is a realtor.

The Knight from Krasnoyarsk, as he is known, became interested in chess as a child, and started training with a punching bag at the age of 14. When he knew about the appearance of a hybrid sport, he applied to the International Federation of Chessboxing to consider his candidacy as a rival to Frank Stoldt, 37, who was the strongest fighter at the time. In the summer of 2008 Sazhin became the champion for the first time.

In the Moscow championship match, Sazhin confronted Gianluca Sirchi, 41, whose appearance matched the image of a person with close ties to the Italian Mafia. But in fact he is a doctor of biological sciences, and quite a peaceful person.

After the fight Sazhin said that from the outset, he decided to concentrate on chess, since he did not feel ready to finish his opponent in the boxing rounds. Spectators bite through his tactics immediately.

"Give up!” the Italian shouted as the Russian made the next move. Gianluca gave up only in the ninth round, and then over the ring for the second time the words of the Russian poet Sergei Yesenin were heard over the loudspeaker: "Again they drink here, fight and cry." Sazhin was going to fight under this music.

After the match, people rushed to shake hands with Sazhin, who once again proved that the power and the mind can coexist in the same person. His girlfriend stood humbly on the sidelines. At the moment it seemed that people who saw him in the ring people will not be able to see boxing and chess separately again.

And the next time they see boxing champion Vladimir Klichko on television, they might wonder how he would look at the chessboard.