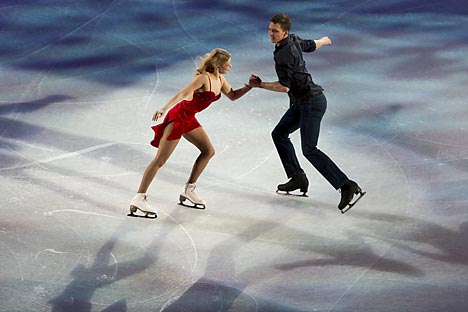 Despite the dampness of the performance on their own ice, Russian skaters Ekaterina Bobrova and Dmitry Solovyov received very high scores. Source: RIA Novosti / Alexander Vilf

A look at Russian skaters’ performance at the recent Grand Prix and what it could mean for the Olympic hopefuls.

Moskovskie Novosti dropped in on the Russian stage of the Grand Prix of Figure Skating and watched the athletes, who next year will represent Russia at the Sochi Winter Olympics.

The discreet charm of figure skating

Maxim Trankov and Tatiana Volosozhar pairing are the main favorites for the gold at Sochi. The main intrigue will be the competition against German duo Savchenko - Szolkowy. The general rehearsal of the Olympic battle will be held in the Japanese Fukuoka, where the final of the Grand Prix will be.

Performances of this pair are kind of a joke. If their short program to the music of Aram Khachaturian's ballet "Masquerade" still fits in any frame, the choice of the rock opera "Jesus Christ - Superstar" as a soundtrack to a voluntary program was a brave decision; the same as the yellow pants of Trankov. But what else can you expect from someone who grew up with the music of The Beatles and consider it his duty to remind the audience about the slogan "Peace to the world"?

The plans for the pair Volosozhar-Trankov are even bigger experiments, but reigning world champions will dare to only after winning their most important victory.

Yuko Kavaguti and Alexander Smirnov at the beginning of the season were considered the favorite in the fight for the second ticket to the Olympics, but the partner’s knee injury intervened in their plans. Still, there is a probability that the "Katyusha" and Tchaikovsky's Symphony "Manfred" will be performed in Sochi. Smirnov began to appear on the ice, after undergoing surgery and is recovering ahead of all the schedules.

The young skater Julia Lipnitskaya surprises people by not only stretching, but also selecting her music. Her voluntary program is accompanied by the complex "Schindler's List." Although Julia called her Moscow performance the worst in her career, it did not prevent her from gathering the most impressive collection of flowers and teddy bears, as well as to win the second round of the Grand Prix after the Skate Canada. In the short program she and the song "Ne oyrekayutsya lubya" were out of the competition - 72.24 points.

Wonder girls Adelina Sotnikova and Elizaveta Tuktamysheva are fighting to give Julia company in the Olympics. The option, in which the two girls got to Sochi, is quite real. Behind them are famous coaches - Tatiana Tarasova and Alexei Mishin, Sotnikova short program is set to the music from "Carmen" was selected in the Grand Prix Final.

The headliner of the men's figure skating, Evgeny Plushenko, missed the Moscow stage of the Grand Prix due to another injury, so the audience's attention was focused on 18-year-old Maxim Kovtun. In collaboration with his new coach Elena Buyanova he won the junior Grand Prix Final Championships, and then suddenly went to the adult European Championship and came out fifth.

The world championship was followed by a fall to 17th place, but in the absence of Plushenko, Kovtun became the main hope of the Russian team.

For the new season the coaches made the skater a gift in form of two quads in the short program and three in voluntary. On the debut tour of the Grand Prix in China, Kovtun was on the second place, in Moscow the results were repeated. A short program under the flamenco the skater appeared in form of a Spanish macho that made Tatiana Tarasova who helped him. Maxim failed to repeat the same for Tchaikovsky's First Concerto on the second day, and in the mixed zone he spoke of spoiling everything by the first fall. His coaches said it was due to a lack of  proper experience.

Nevertheless, in early December Kovtun will go to Japan and perform in the Grand Prix finals. Whether Kovtun will be send to Sochi is an open question and depends largely on the health of Plushenko. Russia at the Olympics will be represented by only one skater. Kovtun has something that already bypassed his highly experienced opponent: The Russian record on the number of points in the short program now belongs to him.

Bronze medalists Ekaterina Bobrova and Dmitry Solovyov are heavily rolled into the Olympic season through injuries and adjustments of their short program, as well as a change of music and costumes in the voluntary dance, which, according to coach Alexander Zhulin, became twice as hard as last year.

In Moscow, Bobrova and Soloviev were ahead of Kaitlyn Weaver and Andrew Pozhe in the short program, but the voluntary dance was not without mistakes and even falling. But despite the dampness of the performance on their own ice, Russian skaters received very high scores, which allowed them to become the first by summation.

Elena Il'inykh and Nikita Katsalapov didn’t perform in Moscow, but at the Paris tour of the Grand Prix they took second place, they came out ahead of the hosts. Coach Nikolay Morozov believes that the paid are experiencing the best time in their career, and the skaters themselves promised to add to the voluntary program some ballet tricks.