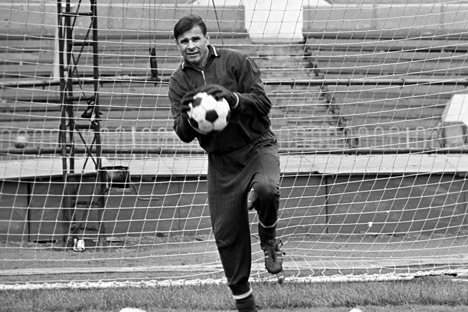 In the half century since Lev Yashin was awarded the Golden Ball in European soccer, no goalkeeper has managed to achieve equal greatness. RBTH remembers moments of the life of the great Soviet soccer player.

Fifty years ago, Lev Yashin received the Golden Ball, recognizing him as the best soccer player in Europe 50. His legend lives on as the first goalkeeper in history to receive the award.

Yashin is considered the brightest player in the history of Soviet and Russian soccer. He was an Olympic champion in 1956, and a champion in Europe in 1960. Soccer clubs around the world sought out the phenomenal Russian goalkeeper, called "black spider.” But he remained loyal to Moscow Dynamo.

Yashin spent 22 seasons (from 1949 to 1970) on the team. The world-famous guardian of the goalpost won a major individual soccer prize at the age of 34. And in this nomination he yields to only one triumphant Stanley Matthews, who received an honorary award at the age of 39.

To some extent, Yashin was fortunate the year he received the Golden Ball. According to current criteria, today the award would have probably gone to Pele, who won the Intercontinental Cup in 1963 with the Santos. That year, the soccer King then scored four goals in the game against A.C. Milan, but at that time the Golden Ball award could be given only to a European. Starting in 1995 founders of the prize decided to change the rules.

During his career, Yashin saved 150 penalties. But another indicator amazes even more: in 813 games he saved 480 goal attempts.

Not many people know that because of a bad debut in soccer, Yashin started playing hockey. In his first game in the national championship in 1950 against the principal rival Moscow Spartak, Yashin made an insulting error: he missed a goal and collided with his team's midfield. Dynamo lost that match, and Yashin spent nearly three years in the reserve. Desperate Yashin began to play hockey. They didn’t have to wait long for achievements. His team, which was also Dynamo, won the Soviet Cup. They even planned to invite the goalkeeper to the national team, but he decided to concentrate on soccer.

Yashin had a proverbial sign: He played in the same cap for many years in the club and the Soviet national team. When eventually the cap wore out, the legendary goalkeeper did not toss it. He always took it with him in any trip. It is curious that before the most responsible and important matches, Yashin used to quietly put the old cap next to the goal.

It is known that Yashin was a big fan of fishing. Wherever he went, he always used to find out places where he could go fishing. Before the match if he fished, Dynamo would win. He had a rich collection of lures, which included imported samples that were in short supply those years. The great goalkeeper often dug in the garbage near his village to find bait. He shoveled the trash and collected maggots and worms - very few people could recognize the legendary goalkeeper as a simple fisherman. Yashin used to cook fish on his own; he did not hesitate to stand at the stove and often cooked for himself and his daughters, when his wife was at work.

Yashin was a heavy smoker. This habit started in childhood during World War II, and the goalkeeper could not overcome it. He smoked four packs of cigarettes a day. Because of addiction, Yashin earned serious health problems: he had developed a stomach ulcer. The goalkeeper even had to carry baking soda to cope with attacks. One day before the Olympic Games in 1956, the team was taken to India for one month in order to prepare for the heat. The players decided to take a picture next to an elephant. Yashin had never parted with cigarettes and even at that moment he was holding a cigarette pack. The elephant saw the box and snatched it with its trunk from the hands of the goalkeeper, accompanied by a loud laugh of teammates.

Yashin was a phenomenal player of his time. After the final match of the Championship of Europe in 1960, Santiago Bernabeu approached the Soviet goalkeeper, who was then the president of Madrid Real. The almighty boss of the "cream" team ostentatiously took a checkbook and offered the goalkeeper to write the amount it would take to get him from Dynamo to Madrid. Hearing this, the other players of the Soviet team, wanting to make fun of the cocky millionaire, told Yashin, "write such an amount which will make his hair stand up on his back."

When senior Bernabeu translated these words, he first smiled and then said, "I'm really ready to pay him any money, even if I had to sell all my family's diamonds and go into debt. But any amount will be insufficient, as in fact Mr. Yashin has no value, as the pictures of the greatest painters in the Prado museum.”