The making of a Russian champion 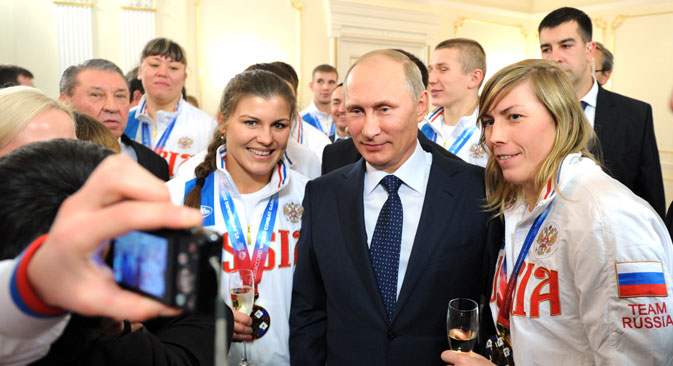 Many of the Americans in Sochi next month will have gotten there with charity, sponsorship cash and financial hardship. The Russians are there on the government’s dime. Pictured: Vladimir Putin (C) meets Russian athletes, the winners of the 2013 SportAccord World Combat Games, at Novo-Ogaryovo residence.Source: ITAR-TASS

Breaking from the old model of total state sponsorship and control, many of the athletes preparing for Sochi have worked with foreign coaches and a wide range of training methods.

Ivan Drago has a lot to answer for.

The ice-cold, thankfully fictional Soviet rival of Rocky Balboa has shaped Western perceptions of Russian athletes ever since he punched his way onto the silver screen in 1985.

His training regime, especially, stuck in the mind - a sterile laboratory using modern technology and steroids to create an artificial athlete. To many, Russian sports stars are either Drago-like robots or Anna Kournikova-style blonde bombshells of the tennis court.

Needless to stay, Russians aren’t robots - I’d hardly be working as a Moscow sports correspondent if they were. But Russians do prepare very differently to their U.S. or British rivals, and with the Olympics coming up, now’s a good time to break it down.

The biggest difference is the role of the state. Many of the Americans in Sochi next month will have gotten there with charity, sponsorship cash and financial hardship. The Russians are there on the government’s dime.

President Vladimir Putin’s ideal in government is the “power vertical” principle, and most Russian sports (except for perhaps soccer, hockey and tennis) fit that template perfectly - athletes answer to their coaches, coaches to their federations, and the federations to the ministry. Funding goes the other way - if the athletes are obedient and successful.

With no need to waste time at promotional to grub up funding, Russians often end up fitter than their rivals, too.

When it works, the success can be spectacular. In Russia’s strongest Olympic sports, events like rhythmic gymnastics, figure skating or synchronized swimming, kids are often intense, lavishly funded training by the age of 10, and helped into elite colleges later on.

Many start training when they’re just four years old - “That late!” exclaimed the synchronized swimming national team at a press conference when one of their members admitted she had only taken up the sport when she was seven.

The results speak for themselves. Russia has won every Olympic gold medal in synchronized swimming and rhythmic gymnastics since 2000, producing a constant turnover of new champions. Ahead of Sochi, 12 of the last 20 figure skating golds have gone to Russians.

Yelena Isinbayeva, perhaps the greatest Russian track and field athlete of all time, calls her coach her “second father” and they share a unique bond. “Sometimes we don't even need to speak. I understand him from syllables, from brief looks,” she told RIA Novosti in 2012.

There’s a downside, though.

When a coach’s authority is backed with the power of the state, it creates an environment ripe for abuses of power.

That may explain some of Russian sport’s many doping scandals - a young athlete is unlikely to ask too many questions about their daily “vitamin supplements” if the coach has the power to take away their place in the SDYuShOR, one of the country’s elite athletes-only schools where the pressure to succeed is intense.

That sort of isolation can turn into a siege mentality. Those young synchronized swimming champions mentioned earlier were speaking less than two weeks after winning yet another world title, but they detected conspiracies against them everywhere. A delayed bus ride to the training pool was a sign that “the Spanish wanted put pressure on us right from the start,” according to Svetlana Kolesnichenko, who left the championships with four gold medals.

Russia’s swimmers have a strict no-fraternizing policy with competitors unless banned doping products “end up in our water or our food, coincidentally, in some way,” she added with enthusiasm. That’s almost unheard of in modern sport  - after growing up in an isolated environment, it seems the isolation can become voluntary.

As for the Americans, “they’ve been trying for several years already to push synchronized swimming out [of Olympics],” Kolesnichenko claimed. There is no evidence of any such attempt.

Synchro is the Russian system at its most successful, most disciplined and most isolated - almost Soviet-style, in fact. But there are signs things are changing.

The system has never worked in some sports - Alpine skiing, say, or cycling - and Russia’s record low medal haul at the 2010 Winter Olympics meant there had to be change.

The result has been an influx of foreign coaches and athletes into sports as diverse as judo, snowboarding and curling, bringing with them new ideas and greater openness, combined with vast state funds to win in Sochi.

Forget Ivan Drago’s steroids - this new fusion of Russia and the West could be the winning formula.