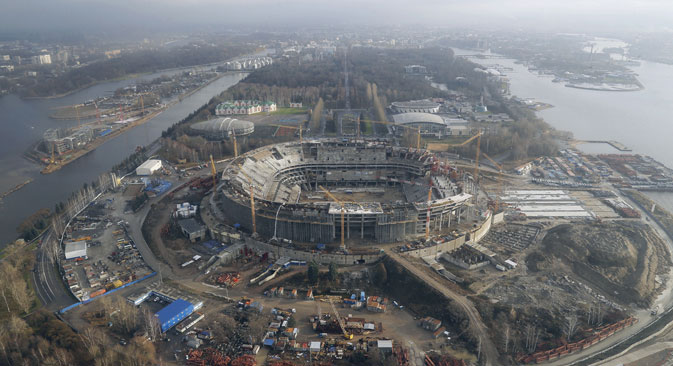 In 2010 the Gazprom Arena was chosen as one of the key stadium for the 2018 World Cup. Source: PhotoXpress

After multiple delays and a quadrupling of construction costs for a new arena St. Petersburg has come up with a new solution: Build two new stadiums.

After multiple delays and a quadrupling of construction costs for a new arena that has left St. Peterburg’s Zenit soccer team without a reliable venue for home games, the city has come up with a new solution: Build two new stadiums.

The first stadium, the Gazprom Arena, has struggled to open since its construction began in 2007. In addition, its original price tag of $250 million has now skyrocketed to $1 billion as deadlines passed and Zenit lacked a reliable venue to play its home games. The Arena is now set to open on July 2016, according to the construction managers. The delay has been particularly worrisome as Russia prepares to host the World Cup in 2018.

Because of the Arena’s delays, the city is now rushing to build a second stadium in the next eight to 10 months, which Zenit will use until the Gazprom Arena is fully completed. After that, the 25,000-seater stadium, which will be constructed north of St. Petersburg and be bigger than the Arena. This new stadium is intended for Zenit’s second team matches, but will meet all FIFA and UEFA requirements. Zenit will be able to host international tournament matches at this stadium, including the champions league.

The second stadium will be built by the Swiss company Nussli, which said it specializes in building sports assets on tight deadlines. These tight deadlines stem from the ‘modularity’ of the new stadium, meaning that certain parts of the arena — such as the cloakrooms and skybox — will be brought to St. Petersburg ready-made.

Maksim Mitrofanov, the general director of Zenit, thinks that construction of the new stadium is a coercive measure. “This season has shown that there is a lack of reserve stadiums in Russia. A good example was when Moscow’s CSKA played a champions league game in St. Petersburg. A 25,000-seater stadium in Russia would be an insurance policy not only for Zenit but also for Russian football as a whole,” Mitrofanov explained.

Mitrofanov added that missed construction deadlines for the team’s main stadium, the Gazprom Arena, was indeed a problem. The club does not understand the deadline for the handover of this asset, or the condition in which it will be handed over, he said.

“Whether it will be fit for purpose after it has been handed over remains a mystery.”

Mitrofanov’s concerns may be justified: The deadlines for construction of the new stadium were missed 19 times. With every new opening date the final cost of the stadium increased. If according to the city’s former governor, Valentin Matvienko, the project was priced at $250 million in 2006, then today this sum has exceeded $1 billion.

Anastasia Gordeyeva, the head of external communications at Transstroy, the main contractor for construction of the Gazprom Arena stadium told RBTH that the handover date for the new stadium is July 2016 at a cost is 34.9 billion rubles (about $1.05 billion or £640 million). “The final sum can be adjusted but only downwards,” she said.

Transtroy is the second contractor working on the construction of the stadium.

The heads of the new contractor complained about the poor quality of the work completed by their predecessor Avant. In particular, they have complained that the main load bearing structures had become damaged from heavy frosts and needed to be rebuilt.

In 2010 the Gazprom Arena was chosen as one of the key stadium for the 2018 World Cup with one of the semifinal matches intended to take place there. This means that the stadium would need to seat no less than 60,000 people. This came as a complete surprise to the contractor, who halted the construction of the stadium stopped for a year.

So far $1.1 billion have been spent on the new stadium in St. Petersburg. By way of a comparison around $2.6 million (about 1.9 million euros or 1.6 million British pounds) was spent on the construction and renovation of stadiums ahead of the 2006 World Cup in Germany.

According to Valeriy Chukhriy, FIFA’s Consultant for Eastern Europe and Central Asia, the stadium in St. Petersburg could become the most expensive in the history of football.

“I often travel to Russia and I don’t sense any urgency to build stadiums for the World Cup,” Chukhriy told RBTH. “I have seen the forecasts for the stadium, and I can say that the total cost of the arena in St. Petersburg will exceed that of the reconstruction of London’s Wembley stadium.” The reconstruction of the legendary Wembley stadium over four years from 2003 to 2007 cost $1.57 billion.

Chukhriy pointed to Ukraine’s experience hosting the 2012 European championship games as a precaution for Russia.

“The Ukrainians warned us that this would be hard and that we would need to start construction in the first year, but we are very behind,” he added.