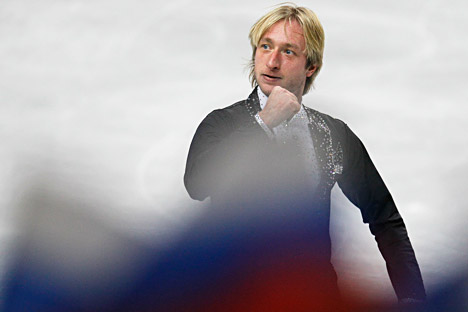 As he spent most of last year injured, Plushenko’s Olympic dream appeared dead. But then came a return. Source: AP

After many twists and turns, ice skating star Evgeni Plushenko will represent Russia in Sochi. Will he live up to the hype?

The wise men took their seats in the hall where the public and the press were barred from entry.

Now was the time to decide, to nominate the chosen one.

In the outside world, true believers eagerly awaited news of the verdict. When it came, it was not via the white smoke of a Papal conclave, but a name uttered to a journalist by a trusted source: “Plushenko.”

Plushenko to compete in 2014 Olympics

So ended one of the longest, bitterest and strangest sporting battles in recent memory, and all for the honor of representing Russia in the men’s Olympic figure skating competition.

The winner is Evgeni Plushenko, a veteran of three Olympics who battled injury and younger rivals to secure the nomination, although his chances looked dead and buried a month ago.

That was when fresh-faced 18-year-old Maxim Kovtun flew across the ice to beat Plushenko at the Russian nationals, a competition where the older man had not finished lower than first for 16 years. After that, Plushenko said he would step aside for a "a young and prospective athlete," a clear reference to Kovtun.

A week ago everything changed. While Plushenko rested, Kovtun went to the European championships in Hungary and failed to cope with the pressure of being the Olympic favorite, repeatedly falling on his way to a fifth-place finish. After the competition, Kovtun blamed the failure on relentless infighting over the Olympic selection. “I go out there knowing that there are people who are pleased by every mistake I make,” he said.

Plushenko was called for a test skate in front of Russia’s skating experts in a hall outside Moscow, and by his own account performed admirably - certainly well enough that, within two hours, insiders were saying he was on the team for Sochi.

“I skated the program clean with all the elements,” he told RIA Novosti. “Everything is fine … I’m pleased, my team is pleased, we did a great and successful job.”

Dramatic as it may be, this latest turnaround is just the latest chapter of a stunning comeback by Plushenko, dating all the way back to the last Winter Olympics in Vancouver four years ago.

Undisputedly one of the greatest skaters in history, Plushenko won Olympic silver in 2002, gold in 2006 and silver in Vancouver, losing out on the gold to Evan Lysacek of the United States in contentious circumstances.

After that, a downward spiral began, as the Russian star first received a ban from competition for skating in unauthorized shows before injury after injury laid him low. The sole high point was a seventh European title in 2012, but when he tried to defend that title a year laid, a back injury ended his challenge.

As he spent most of last year injured, Plushenko’s Olympic dream appeared dead, the great skater reduced to a torrid months-long legal battle with a Russian TV commentator who accused him of faking his back problem.

Then came a return. It started with a win at a little-regarded event in Latvia against opponents little higher than club level, but it was a start nonetheless. But injury struck again, keeping him out of the Grand Prix in Moscow as Kovtun took silver, seemingly another nail in his older rival’s coffin. Then came defeat to the young pretender at Russian nationals.

All the while, behind the scenes, some among Russia’s skating experts were pouring poison in the ears of journalists, according to sources in the know. To some, Kovtun lacked determination, to others, Plushenko was a broken old man.

Then came last week, Kovtun’s failure in Hungary and Plushenko’s invitation to that fateful test skate. All that remains is the small matter of the Winter Olympics.

In this epic, you can take your pick of religious parallels. Is Plushenko the prodigal son returned to his fatherland? Lazarus risen from the dead? One reincarnation closer to Nirvana?

Certainly, to judge by the way Twitter lights up when his name is mentioned, he is something of a disciple to the passionate cult of figure skating fans.

Perhaps his story points at something deeper. If, as is sometimes said, sport has replaced religion as the opiate of the people, then Plushenko’s intoxicating epic is prime material for a modern gospel. After all, sport needs an audience as much as a religion needs a congregation, and both are packed with obscure rituals, so it’s only natural to look for parallels between them.

However, the last chapter of the Plushenko story is not yet written.

Now this Russian hero, prematurely an old man at 31 under sport’s laws, heads toward what may be the greatest test of his life. If he fails, he’ll be another ex-champion, good but not great.

If he succeeds, he’ll join the pantheon.