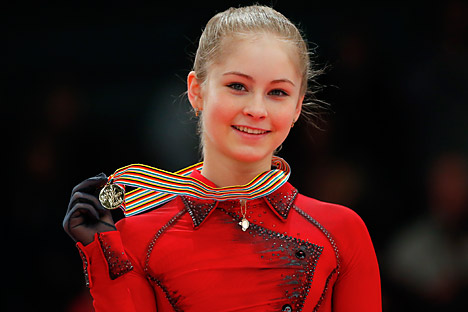 After Budapest championships many experts are confident that Julia Lipnitskaia is likely to win an Olympic medal in Sochi. Source: Reuters

The European championship in Budapest was a success for Russian figure skaters, who won eight medals: two gold, four silver and two bronze.

Russia’s top skaters brought home several medals from the European championships in Budapest this month. A quick rundown on the competition’s highlights.

Russia's leading pair, Tatiana Volosozhar and Maxim Trankov, sincerely believed that having missed the Russian championships, they had arrived in Budapest at the top of their game. Proving their theory right, they won the short program with yet another world record.

An hour before the free skating event, it was announced that their main rivals, the German pair Aliona Savchenko and Robin Szolkowy, had decided to withdraw from the tournament as Savchenko was unwell. Given all that, Volosozhar and Trankov's chances of victory appeared to be almost 100 percent certain.

However, the reality turned out to be not so straightforward. Things went seriously wrong with the favorites' free skating program. First Trankov stumbled while landing after a parallel triple jump. Then he fell during the first jump in a jump combination, thus ruining the whole sequence. Finally, in a throw jump Volosozhar fell, too.

As a result, Volosozhar and Trankov lost the free skating program to the champions of Russia, Ksenia Stolbova and Fedor Klimov, but still managed to win the championship thanks to their spectacular success in the short program. In the end, the Russia champions got the silver medal, with the bronze going to yet another Russian pair, Vera Bazarova and Yuri Larionov.

Luckily, the victory of the 15-year-old European Championship first-timer Julia Lipnitskaia was unequivocal and the highlight of the whole tournament. Hers was the only free skating program to be met with a standing ovation. The program was performed to the "Schindler's List" soundtrack. In the short program, Lipnitskaia came second after Russia's champion Adelina Sotnikova. Yet, she got 209.72 points for both events, the second highest score ever for ladies' individual figure skating after the 228.56 points scored by South Korea's Kim Yu-Na at the 2010 Olympics in Vancouver. Now many experts are confident that Julia Lipnitskaia is likely to win an Olympic medal in Sochi.

Elena Ilinykh and Nikita Katsalapov, who have two excellent programs this season, have so far been able to show them to their full advantage only at the Grand Prix in France.

With last year's European Champions Ekaterina Bobrova and Dmitri Soloviev and World Championship bronze medal winners, France's Nathalie Péchalat and Fabian Bourzat, not taking part, it seemed that the Russian athletes had a good chance of winning the Budapest championship. Their 0.04 point defeat to the Italians Anna Cappellini and Luca Lanotte in the short program at first was dismissed as an unfortunate glitch. However Elena's fall during the "Swan Lake" free skating program sealed the Russians' fate, and in the end, they lost to the Italians.

Men: Intrigue over who will represent Russia in Sochi thickens

The most interest was generated by the men' individual skating event, whose unexpected outcome has further confused the complicated situation with Russia's choice of who will fill the only remaining vacancy in the national figure skating team: 31-year-old Olympic champion Evgeni Plushenko or 18-year-old champion of Russia Maxim Kovtun.

Plushenko attended two events this season: last November he won a second-rate international tournament in Riga and then won the silver medal at the Russia championship in Sochi. He did not compete in the European Championship. His rival Maxim Kovtun, in addition to winning the national championship, had a series of quite successful performances at Grand Prix events, even securing a place in the finals, where he came the fifth. Had he won a medal at the European Championship, there would have probably been no doubt left as to who will go to Sochi.

However, Kovtun did not manage to get higher than fifth place. Moreover, he failed to successfully perform three out of five quadruple jumps in two programs. Instead, the surprise leaders were Sergei Voronov, winning the silver, and Konstantin Menshov, with the bronze. The 26-year-old Voronov came second after twice European champion, Spain's Javier Fernández. Now he too has a rightful claim to seek a place on the national Olympic team.

Russian Sports Minister Vitaly Mutko, who was also present in Budapest, told Kommersant that when it comes to whom to select for the Olympic team, he personally would be guided exclusively by principles of sport.

According to Alexander Lakernik, chairman of the International Skating Union (ISU) technical committee, Sergei Voronov has become a third candidate for the Sochi ticket. Whereas the president of the Russian Figure Skating Federation, Alexander Gorshkov, who has promised to unveil the national team for the Olympic Games on January 23, said that Maxim Kovtun had long ago proven everything there was to prove. The decision to send the athlete, who was exhausted by endless selection events, to the European championship had been a mistake.