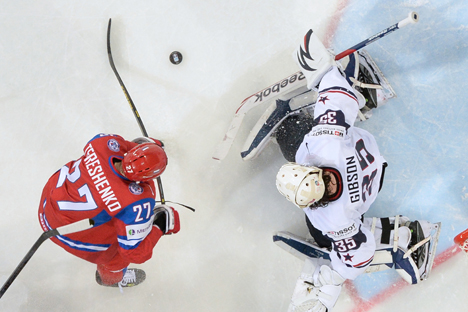 Team Russia looks to take on the U.S. and Canada with players hailing from both the NHL and Russia’s Kontinental Hockey League.

When Russia’s hockey team faces off against Team U.S.A. in Sochi on Feb. 15, the trans-Atlantic clash is likely to bring the host nation to a halt.
Not only is the men’s hockey tournament the single biggest event of Sochi 2014 for Russian fans, it represents a rare chance to continue the sequence of superpower sporting summits that dates back to the 1970s.

The game will be the continuation of a sporting rivalry that once pitted political ideologies against one another – and that remains a barometer of national pride. Additionally, for Russian fans, an Olympic Winter Games on home ice is an unmissable opportunity to land a first-ever hockey gold for an independent Russia and reassert the sporting primacy established by the near-invincible Red Machine of the Soviet Union over the pampered stars of the National Hockey League.

But what was once a clash of two seemingly alien cultures – East versus West, Communist versus Capitalist – is now a very different affair. The 1972 Summit Series, when the notionally amateur Soviet Olympic champions played a team of Canadian professionals from the NHL was a confrontation between the best of the best. More than that, it was a clash of two unknowns: previously only reputations had filtered through the Iron Curtain.

Canada won the best-of-eight series 4-3 (one game was a tie), but only after an almighty shock on home ice that saw the Maple Leafs booed out of the arena by their own fans after four games in Canada. Heading to Moscow, they trailed 2-1 in a series they were expected to win easily, and pride was hurting.

The impact was far deeper than a few hockey games, though. Ted Nolan, now behind the bench of the Buffalo Sabres, watched the series as a teenage hockey fan and saw European stars for the first time. “We realized they had some guys who could play hockey,” he said, and that impression stayed with him. Today, aside from his interim role with the Sabres, he is also head coach of Team Latvia, and will lead the former Soviet Republic’s team to the Olympics.

Nolan is typical of a new generation of Trans-Atlantic hockey enthusiasts, reared on the Summit Series and the “miracle on ice” of the 1980 Lake Placid Olympic Winter Games, when the U.S. national team upset the Soviet juggernaut. Although it took almost two decades to get from the Summit Series to relatively free movement of players and coaches across the ocean, today’s Russian national team is dominated by NHL-based talent. More than half of Russian team coach Zinetula Bilyaletdinov’s roster plies its trade overseas, and the likes of Alexander Ovechkin (Washington Capitals), Pavel Datsyuk (Detroit Red Wings) and Evgeni Malkin (Pittsburgh Penguins) carry the weight of a nation’s demand for gold.

Changing circumstances mean changing rivalries: while in the 1970s, players like Boris Mikhailov or Phil Esposito knew each other only by reputation – and reportedly didn’t like what they heard of one another – Malkin shares a Pittsburgh locker-room with Canada’s top star, Sid Crosby. However, the defining battle among fellow Penguins may come in that Russia-U.S. game, when Malkin will have to contend with grizzled defenseman Brooks Orpik, also of Pittsburgh. He’s the kind of gnarled veteran on which successful teams should be based, and his close-up view of Malkin’s game makes him ideally placed to combat one of Russia’s top goal threats.

The reverse story could be true in Los Angeles, where the Kings will send Stanley Cup-winning defenseman Slava Voynov to Russia to face his club captain, Dustin Brown, a rough-and-ready forward whose solidly unspectacular scoring is eclipsed by the gritty leadership he brings in tight games. Voynov, a rare example of a strong Russian blue-liner, might also come up against his L.A. Kings colleague Drew Doughty, should we see a long-awaited match-up between Russia and Canada. Doughty is arguably Canada’s top guy on defense and was called the top player in the Kings’ 2012 Stanley Cup win.

Elsewhere, though, Canada’s roster sprung a few surprises: goal-getter Steve Stamkos got the nod despite struggling with a leg injury of late, but his Tampa Bay line-mate Martin St. Louis missed out, as did the Flyers’ Claude Giroux. Then there was the decision to draft in St. Louis Blues’ defense pair Jay Bouwmeester and Alex Pietrangelo, both preparing for Olympics debuts and seemingly selected with the bigger ice of Europe in mind. But the buzz is still all about Crosby, the golden goal hero of Vancouver and back in action at last. His long spell out with concussion-related problems, followed by the enforced R&R of last season’s lock-out, led some to question whether his career was destined to wind down, but a league-leading 68-point haul in the NHL suggests he’s going to be a threat to any opponent in Sochi.

Familiarity has taken some of the edge off this rivalry, but has done little to dampen suspicions: when the Colorado Avalanche’s Russian goaltender Semyon Varlamov was arrested on domestic-abuse charges in October, Russian State Duma Deputy Igor Ananskikh, who heads the parliamentary commission on sport, claimed the case was motivated by a desire to scupper Varlamov’s impressive early-season form and see him locked up before Sochi 2014. The charges were dropped, and Varlamov is set to backstop Russia’s line-up in Sochi.
NHL pitfalls?

Ironically, though, a rivalry that started out pitting the virtues of collective effort against the individual expressions promised by the West now sees those prejudices turned back on their homelands. Hockey in Europe is typically played on a bigger rink than in the NHL, and Russian fans insist that their hockey style allows greater scope for individual brilliance, that game-breaking glimpse of skill that leaves opponents stumbling blindly towards defeat. By contrast, they claim, the NHL is a crude exercise in “dump-and-chase,” interspersed with on-ice violence, where creative flair is sacrificed to percentage-based play. The evidence, they say, comes from a host of Russians – from “Russian rocket” Pavel Bure to Nichushkin – who play a daring attacking game in the NHL, securing plaudits as they go. On the rinks of North America, meanwhile, the feeling persists that Russian players are overhyped show-ponies, full of flicks and tricks, but lacking the application and endurance to tough out a potential 100-game season culminating in Stanley Cup glory. Whatever happens in Sochi, it promises to be another lively instalment of a rivalry between nations which have been brought up to regard excellence on ice as a given and defeat in “our game” as a crushing blow to national pride.