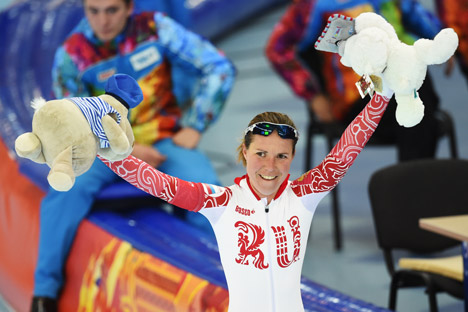 In the minutes before the Sochi Olympic opening ceremony, a squad of Russian police strutted into the Fisht Olympic Stadium… and promptly began singing Daft Punk’s “Get Lucky.”

That performance could have been put on specially for Chinese speedskater Li Jianrou, who won 500m gold almost by default in Sochi when all her rivals, among them Britain’s Elise Christie, crashed out in front of her.

Up in the mountains, there were more than a few lucky winners too as warm temperatures and rain turned the snow to mush, giving rise to what U.S. ski star Ted Ligety called “funky results,” while in men’s ice hockey, tiny Latvia and Slovenia stunned big-name rivals to reach the quarterfinals. 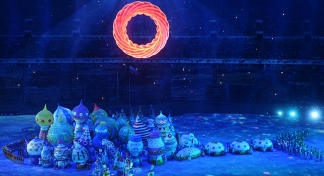 Of course, there will always be athletes who luck in at any Olympics, but Sochi has also seen more than a few under-the-radar medalists whose skill simply went unrecognized before the Games.

Chief among them is Vic Wild. Four years ago, he was an unremarkable snowboarder from the U.S. Pacific Northwest struggling to make ends meet. It has plenty of fans in Europe, but Wild’s discipline of parallel giant slalom is desperately unfashionable among American snowboard fans more concerned with Shaun White’s latest halfpipe tricks.

That all changed when he switched allegiances to Russia, following his wife Alyona Zavarzina. Funding and support followed, and Wild’s Olympic dream came true when he and Zavarzina both won medals in Sochi within minutes of one another – gold for him, bronze for her.

Wild listed how Russia had helped him: “My board here, this golden plate (his medal), the bindings, outfit, helmet.”

“They take care of everything for me. They just expect me to get some results.”

Another Russian snowboard sensation is Nikolai Olyunin, who despite Russia’s aggressive promotion of its Sochi medal hopes, was almost unknown in his homeland before winning snowboardcross silver. He simply wasn’t considered enough of a podium threat.

The stocky 22-year-old Siberian was a marginal figure even two years ago and did not compete at the 2010 Winter Olympics in Vancouver.

Since then, however, Russia ramped up its support for snowboardcross, a chaotic sport in which six riders race at the same time along a track with jumps, drops and steeply banked turns. The result – Olyunin was the fastest rider in contention in Sochi, and would have won gold if not for some smart defensive maneuvering by France’s Pierre Vaultier.

“I think I’m a pioneer because I only got to world championship level recently,” Olyunin said, adding of his regular, lengthy Alpine training camps: “I’ve put in huge, huge work. I was rarely at home.”

Nick Diebold of the U.S., the bronze medalist behind Olyunin, paid tribute to Russia’s rapid rise to the top of the global snowboardcross landscape.

“Boardercross has been around for a long time and the Russians kind of came onto the scene late,” Diebold said. “They’ve really surprised a lot people, worked super hard and come up over the last couple of years.”

At just 22, Olyunin now plans to retire and go into business after a short but glorious career. That puts him on almost the exact opposite trajectory to Britain’s own snowboard surprise of Sochi, Jenny Jones. The 33-year-old from Bristol scraped by for years in short-term jobs, including a stint in a cardboard factory, before her preferred discipline of slopestyle was added to the Olympic programme in time for Sochi.

"I'm so, so surprised right now at what's just happened and I can't believe I made it on to the podium," said Jones, who made the quintessentially British admission that she had watched “Downton Abbey” the night before her first Olympic final.

Russia’s equivalent of Jones – the tough veteran finally recognized – is probably speedskater Olga Graf. Aged 30 and never having been selected for an Olympic Games before, she stunned the country by winning bronze in the 3,000m.

Graf’s an engaging character. She picked up speedskating on the recommendation of her martial arts coach, with whom she was only studying so that she could protect her classmates from school bullies. After coming third in her final at Sochi’s Adler Arena, Graf unzipped her race suit, but there was a catch – an accidental striptease.

Modern race suits fit so tightly to the body that wearing anything underneath is impossible. Graf wasn’t used to the cutting-edge suit designs and displayed rather more than she had planned to (although fortunately nothing too embarrassing).

"I totally forgot," Graf said. "We have very good suits and they are very tight.”

A touch of naivete at the Olympics is certainly excusable if you have a medal, however.