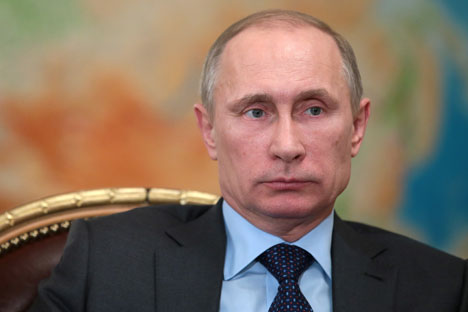 Vladimir Putin: "The first keymission of the Paralympic movement is to increase interest in sport and promote integration of people with disabilities into the mainstream of society." Source: ITAR-TASS

As the Paralympic Games open in Russia for the first time, the Russian president spoke about the importance of the event for people with disabilities.

The XI Paralympic Winter Games will open on March 7 in Sochi. On the eve of the opening, Russian President Vladimir Putin spoke to members of the Russian and foreign press about the importance of the Paralympic movement. Here are the five major takeaways from his comments:

“Paralympic competitions are able to provide the most powerful positive impact on society and on people’s minds. The courageous Paralympians actually energize us and show each of us the meaning of centrality of purpose and a winning attitude, which means an honest and active attitude to life.”

The Paralympics encourage integration of people with disabilities into society

“The first keymission of the Paralympic movement is to increase interest in sport and promote integration of people with disabilities into the mainstream of society. I am sure the Paralympics in Sochi will make a worthy contribution to these tasks, will involve more people in sport and in regular exercise – and in general will help them build up a belief in themselves, in their own strength and abilities.”

“Achievements of the Paralympians, their strong desire to win, are the best examples for showing that people with disabilities can live actively and fully, as well as achieve significant success.”

The Paralympics break down stereotypes

“The organization of the Olympic and Paralympic Games in Sochi actually set new, modern standards for urban planning, based on creating the most comfortable conditions for people with disabilities.”

“Just the appearance of the Paralympics has radically changed the perception of people with disabilities. The Games are breaking today’s existing stereotypes, and continue to convince everyone that the real power lies in the character of a person, which can overcome any difficulties and trials.”

What Russia is doing to help people with disabilities

“In 2008, Russia ratified the Convention on the Rights of Persons with Disabilities. The formation of the barrier-free environment is now spreading all over the country, ensuring full and equal access for people with disabilities and people with limited mobility to transport facilities and social infrastructure, as well as means of communication.”

“We started its implementation in 2011, and provided significant resources – more than 180 billion rubles ($4.9 billion). We have much work here because, essentially, we are only at the beginning. But the first results are already visible, for example, in increasing accessibility to sport facilities and the development of adaptive physical exercises and sports.”

Paralympians have amazing stories to tell

“There are many examples of how quite healthy, successful people, who never faced such significant everyday problems, just broke down and gave up [when faced with the challenges of living with a disability].”

Opinion: How to make Paralympics cooler than Olympics

“In contrast, the history of the each Paralympian is a story of victory over themselves, over ailments, over difficult circumstances. Therefore, no one can remain indifferent to this.”

“I have met with Paralympians many times, and I can confirm that they are people of a special character and special hardening.”

“We all need to learn from their attitude towards life, towards themselves and towards the outside world.”