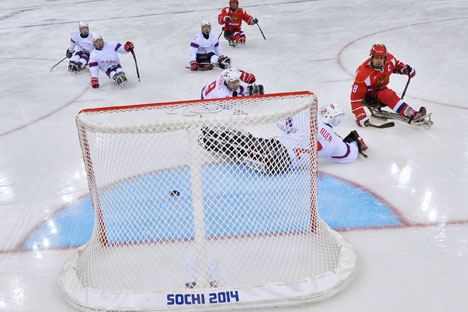 The money and focus Russia has poured into paralympic training has paid off in Sochi. Hopefully the experience will translate into better living conditions for disabled people across Russia.

The other teams aren’t even close.

With over 20 gold medals and nearly 60 total medals, Russia is dominating the Sochi Paralympics with two days of competition remaining. The last country to post those kind of numbers was Norway 20 years ago, when the program contained almost twice as many events.

So just what is the secret of Russia’s success? In a word, money.

Russian cash is transforming the playing field for Paralympic sport, and it’s invested smartly to ensure maximum results. An example: Four years ago, during the last Winter Paralympics in Vancouver, Russia didn’t have a sledge hockey team.

Or rather, there was general agreement that there should be a team in time for Sochi 2014, but it barely trained and didn’t take part in any major competitions. At its first tournament, Russia lost all three preliminary round games, allowing a total of 60 goals and scoring precisely none.

On Thursday, that same team beat Norway 4-0 to reach the final of the Paralympics, ensuring at least a silver medal as the sellout crowd at the Shayba Arena roared its approval. The Norwegians, five-time Paralympic hockey medalists, recorded just six shots on the Russian goal, looking at times like they were playing a different sport.

In a way they were – while Norway’s was a team of amateur enthusiasts, spiritually not too different from the patients who invented sledge hockey at a Swedish rehabilitation center in the 1960s, the Russians were the product of a well-oiled state machine.

“Every day we’re doing this sport, sledge hockey,” Russian forward Vadim Selyukin, who lost his legs while serving in the army, said. “Every day we’ve had training at the Olympic base … I’ve barely been at home.”

The Norwegians, by contrast, train in club teams in the evenings and mostly play in a local league packed with inexperienced players. In the Paralympics, full-time athletes like the Russians are few and far between.

Precise figures are hard to come by, but most of the backing for the Russian team seems to be from the state, with a contribution by telecom company Megafon.

When I asked Norwegian captain Jan Roger Klakegg if he thought the result hinted at the end of an era, he said: “I hope not, but Russia has been growing fast and they are a very strong team, so we have to step up to beat them,” adding that the Russian rise had made funding “a factor that’s important.”

The nature of the Paralympics mean a little money and organization can go a long way. Russia has found athletes to compete in just about every Paralympic event, which sounds simple, but is revolutionary in its own way.

Some Paralympic sports, like hockey, are hugely competitive, but others, mostly in women’s visually impaired skiing, attracted as few as four entrants for some races in Sochi – if you can just find an athlete, you have a chance of a medal.

Give that athlete regular access to modern training facilities and you can dominate, as Russia proved by winning gold and silver in one of those four-woman races, the 20km cross-country.

Providing suitable training facilities can unlock potential in athletes who were never medal contenders previously. Aged 36, skier and biathlete Roman Petushkov hardly fits the profile of a first-time winner, and won a single silver medal in 2010. Now he has five gold medals already in Sochi and is aiming for more.

The Russian approach has been tried successfully before at the Paralympics. China expanded its state sports machine into disability sports in preparation for hosting the 2008 Summer Games and has topped the medal table convincingly ever since, suggesting Russia’s investments now could have a long term future.

That’s certainly the view of Russian Sports Minister Vitaly Mutko, who says he wants to set up Paralympic training bases in all of Russia’s 83 regions. Naming Moscow and six other regions as priority “growth points” for disability sport, he added that athletes “have got options to live there.

We give them allowances.” In a country where Sochi’s accessible barrier-free environment is a rarity, sports offers disabled people a chance to “get out of the flat” and a play a fuller role in society, Mutko added.

The message to Russia’s rivals for Pyeongchang 2018 is clear – we’re staying on top.