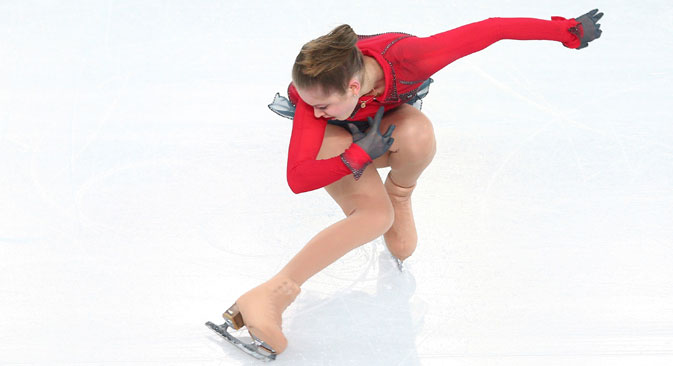 The Russian team is returning from the 2014 World Figure Skating Championships with two silver medals. For most of the skaters, including Sochi sensation Yulia Lipnitskaya, the tournament marked their world championship debut.

The 2014 World Figure Skating Championships in Saitama, Japan, ended on March 30 with the home nation confidently on top in the total medal count. Nineteen-year-old sensation Yuzuru Hanyu and the experienced 23-year-old Mao Asada won gold in the men's and ladies' singles, while another Japanese figure skater, Tatsuki Machida, 24, won silver in the men's singles.

Though the Russian team came only fourth in the total medal count - behind Italy and Germany - they picked up two silver medals, both by world championship debutants: 15-year-old Yulia Lipnitskaya in ladies' singles and Ksenia Stolbova and Fedor Klimov in pairs.

Interestingly, for most of the members of the Russian team, the world championship was the first of their careers. In addition to Lipnitskaya and Stolbova/Klimov, the debutants were: Anna Pogorilaya in ladies' singles, Julia Antipova and Nodari Maisuradze in pairs, and Victoria Sinitsina and Ruslan Zhiganshin in ice dancing.

Lipnitskaya: Be well-prepared, and you don't have to worry about the jitters

Lipnitskaya was philosophical about the result, saying: "I had no chance of beating Mao Asada in a world championship in Japan. Even if I had produced a clean free program, there would still have been a difference. Mao is finishing her career; she could not lose. I have many fans in Japan. People constantly ask for autographs and want to take a picture with me. It’s a bit tiring but I’ve already got used to all this attention. Second place will push me to work even harder and to continue to improve."

An added bonus is that the number of entries Russia will be able to send to the 2015 world championship has increased thanks to the team’s performance in Japan. In ice dancing, pairs and ladies' singles it has secured the maximum number of entries – three, while in men's singles, Russia's quota has increased from one to two entries. This was thanks to the fourth place secured by 18-year-old Maxim Kovtun.

Many sports fans first became aware of Kovtun because of a scandal surrounding the choice of skater to represent Russia in the men's singles event at the Sochi Olympics. The unwillingness of coaches to replace veteran Evgeny Plyushchenko, who was suffering from an injury, with the young talent from the Urals city of Yekaterinburg drew harsh criticism. In the end, Plyushchenko withdrew from the competition because of his injury and Russia was left without a medal.

PHOTO OF THE DAY: Lipnitskaya performs in Japan

Russian coach is a winner for ice dancers

It was largely due to all the hype generated by that controversy that Kovtun's performance in Japan was scrutinized with such zeal by experts and ordinary fans alike. After the short program, Maxim was in seventh place, but his excellent performance in the free program pushed him up to fourth. At the 2013 world championship he came a distant 17th.

"The coaches say there is some progress in my skating. My choreographer Pyotr Chernyshev does not speak of points and records but instead points out that at the start of the season, at the very first failed element in a program I would give up the fight,” said Kovtun, explaining that now he has learnt to analyse his mistakes and correct them as he goes along.

“Now I know how to fight. At the moment Hanyu is indeed unbeatable, but at the last world championship he was not even among the top three winners. I believe that I'll be able to do the same and get to the very top."

In the pairs event, Russia's Ksenia Stolbova, 22, and Fedor Klimov, 23, came second behind now five-time world champions Aliona Savchenko and Robin Szolkowy from Germany. Interestingly, in Sochi, Stolbova and Klimov managed to beat the German pair to the silver medal. This time round, luck was on the side of the more experienced skaters.

In ice dancing, Russia's Elena Ilinykh and Nikita Katsalapov, who won the bronze in Sochi, were considered the favorites. However, an unfortunate mistake in the short program cost them dearly. Even after finishing first in the free program, they were left without a medal, coming up short in fourth place.

The gold went to Anna Cappellini and Luca Lanotte from Italy; the silver to Kaitlyn Weaver and Andrew Poje from Canada; and the bronze to Nathalie Péchalat and Fabian Bourzat from France.

“The hotel was quite far from the ice palace and the journey there and back took rather a long time. Traffic in the city is very busy. On average, it took us about two hours to get back to the hotel,” said Piseyev.

He added that on several occasions Russian athletes had been obliged to spend the night at the ice palace. “The organizers had provided several beds in the recreation area; they must have anticipated that the beds might come in handy. It is of course difficult to prepare in such conditions, which had an effect on the final results," said Piseyev.