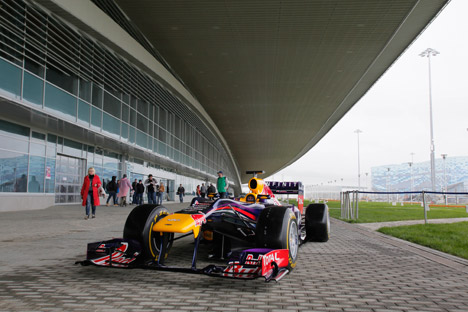 Could Russia be the next big power in Formula One? It seems strange, but it just might be possible.

Back in 2010, when Russia won the rights to host F1 for the first time, the site of the new track at Sochi’s Olympic Park was a muddy mess. Now, with six months to go until the first race, Russia is surging forward.

For Daniil Kvyat is fast. Seriously fast. It’s been only a year since the first Russian in F1, Vitaly Petrov, left the sport, but Kvyat seems like a driver from another generation. Kvyat is 19 and fresh-faced while Petrov is a decade older, but the differences between them are ones of style.

Cheerful and slightly bumbling, Petrov was something of a throwback. With his stubble, halting English and often reckless driving style, he would have been barely out of place as a teammate to the 1970s champion James Hunt, although without the Englishman’s legendary appetite for sex and booze.

Throughout Petrov’s three-year stint at the pinnacle of motorsport, he often seemed a little confused about how he had ended up in F1 and where he was going. While he was fast enough on his day, making the podium at the 2011 Australian Grand Prix, my abiding memory of his career is an onboard shot of him waggling a useless steering wheel as he slid towards a barrier in Malaysia, adrift with a broken steering column.

Kvyat could not be more different. For a start, he is fluent in English, Spanish and Italian as well as his native Russian, making it a breeze for him to discuss the details of car set-up with his mechanics at Toro Rosso. I once saw Petrov, by contrast, make at least 10 rather confused attempts at recording a five-second English voiceover.

In conversation, Kvyat is personable and comfortable with the media, a perfect fit for the whirlwind of press conferences and corporate events that confront the modern F1 driver. He can, however, seem a little bloodless, a man certainly keener to discuss the intricacies of technical gizmos than Petrov, who once gleefully told a group of journalists, including myself, how he wanted “to come back [to the top 10] and kick everyone’s arses”.

On the track, he’s something special. The first time I saw him was in 2012 when he blitzed two Formula Renault 2.0 races at the newly-built Moscow Raceway, adapting immediately to a track neither he nor anyone else had driven before.

Kvyat won the GP3 series last year and has made a strong start to his career in F1 by any rookie’s standards, taking three points from his first two races at Melbourne’s Albert Park and Malaysia’s Sepang, all the more impressive when you consider he had never raced before at either of those tracks. Eleventh place at the last race in Bahrain was respectable, and Kvyat should be fighting for points in Shanghai on Sunday.

The Toro Rosso, with its long proboscis-like nose, is nowhere near fast enough to be a race winner but should be good enough to put Kvyat in the fight for some strong top-10 results this season. He’ll need them.

The Italy-based Toro Rosso is the second team for Red Bull, home of reigning champion Sebastian Vettel. There are two possibilities for any Toro Rosso driver – impress the management and, like Vettel and his new teammate Daniel Ricciardo, you could be promoted to Red Bull’s main team to fight for the title; fail and you’ll be ruthlessly cast aside.

Kvyat is the only Russian in the frame to compete at October’s first Russian Grand Prix in Sochi. After failing to keep his race seat with back-of-the-grid outfit Caterham last year, Petrov is spending 2014 in the German DTM touring car series and has little apparent hope of making an F1 comeback.

A couple of other promising youngsters could make the leap in coming years, most obviously Sergei Sirotkin, who was in line to become the youngest-ever F1 driver this season with Sauber before doubts arose over his lack of experience and rather vague sponsorship arrangements.

Swiss team Sauber say they are still keen to get his career back on track with an F1 race drive, but the 18-year-old has been forced to spend 2014 in the Formula Renault 3.5 series, where he sits fourth in the championship after two races. Another promising Russian, Nikolai Martsenko, is also there. 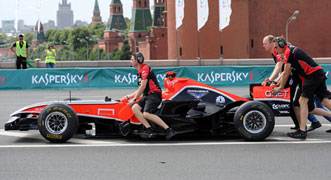 Across the Atlantic, Moscow-born Mikhail Aleshin is making a splash, with a sixth-place finish in his first Indy Car race last week, and reviving a career that went off the boil when he failed to build on some good results in lower-level European series.

But one black mark on Russia’s motorsport record is the fact that the only F1 team to fly a Russian flag, Marussia, have failed to make progress and remain firmly at the back of the grid with rumours swirling of financial problems.

Still, the big picture remains positive for Russia, which now has its first F1 race and its first driver who looks a potential race-winner some day. Roll on Sochi!