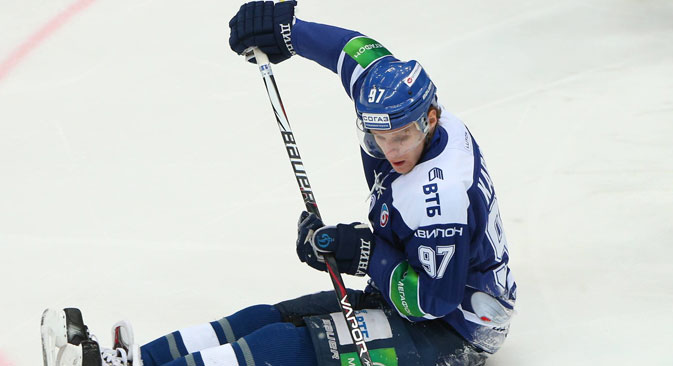 Every year Russia’s Continental Hockey League produces new talents, many of whom have the potential to grow into real superstars. The 2013/2014 season saw a fine crop of promising junior players come through, a number of whom are already targets for NHL clubs.

April 30 saw the final playoff game of the 2013/2014 season at the Kontinental Hockey League (KHL). The Gagarin Cup went to Metallurg Magnitogorsk, which beat Czech side Lev Praha in seven games.

Russian ice hockey experts have already described this season as the best in the KHL's six-year history so far. Fierce fighting in all playoff games and numerous surprises, such as the defeat of the tournament's richest team, SKA St. Petersburg, in the West Conference semi-finals or the success of Lev Praha, which nobody expected to do so well, has made the league even more exciting for fans.

The KHL is equally exciting for NHL scouts as every year it produces new talents, many of whom have the potential to grow into real superstars. This year was no exception.

RBTH has selected the most promising KHL players who may become NHL rookies as early as next season.

His hat-trick in a game against the reigning KHL champion at the time, Dynamo Moscow, was far from the only achievement by the young CKSA player this season. In the 52 games of the regular season, he scored 37 (19 + 18) points. Prokhorkin became the best scoring forward in a team which has international hockey stars such as Alexander Radulov and Alexei Morozov among its players.

It was therefore no surprise that Prokhorkin got a call-up to the Russian national team in December. If he continues to grow and improve at the same pace, a regular slot on the national squad, whoever is in charge, is only a question of time. And the young talent has already had his moment of fame at the KHL All-Star Game. Prokhorkin has been drafted by the Los Angeles Kings and, subject to agreement from all sides, may start playing for the California team as early as the next season.

Dynamo forward Maxim Karpov was voted by fans as the team's best player this season. This opinion is largely shared by the head coach of the Russian national team, Oleg Znarok, who has invited the player to the squad.

A native of Chelyabinsk, Maxim has become a true leader for the Moscow team this season and practically single-handedly ensured Dynamo's victory in the West Conference regular season. With 34 points in 48 games, he finished the season as one of the best scorers for a team winning the Continental Cup (the trophy awarded to winners of the regular KHL season). Karpov has not yet been drafted by any NHL club, however his successful season has led to reports that Minnesota Wild and Carolina Hurricanes have expressed an interest.

Goalie Andrei Vasilevsky, who has been drafted by Tampa Bay Lightning, is the likeliest candidate to start playing for NHL before the year is out. The selection of such a talented goaltender in the 19th draft position is a piece of good luck for Tampa: After the current season, the Salavat goalie would have definitely made it to the NHL's top 10 first-round draft picks.

Russians in the NHL: Bryzgalov flourishes as Ovechkin falters

Vasilevsky gave a very confident performance in his second world junior ice-hockey championship, ensuring Russia's place in the semi-finals and practically single-handedly beating the Canadians to third place, making 26 saves. Then he easily replaced the experienced 34-year-old Alexei Volkov as the Salavat Yulaev goaltender and showed that he fully deserved the role by keeping three shutouts. On April 19, Andrei made his first appearance for the national team, in a 4-2 win over Germany.

Tampa Bay Lightning main goalie Ben Bishop had an excellent season but made some unforgivable mistakes in the playoff. He would benefit from having a young and ambitious rival in the next season, as would the team's coaches, having a bit more confidence in the safety of their net.

Metallurg forward Damir Zhafyarov has everything to become a top-class player: His skating is great and he has a strong shot, but most importantly he has an understanding of the moment. Zhafyarov knows when to shoot and when to pass and never goes into "the shadow". He shone at the 2014 world junior championship in Malmo, scoring 6 points (3+3) in seven games. In the end Russia came only third, but Zhafyarov was selected for the symbolic team of the tournament. It was then that he caught the attention of NHL scouts.

In March, Zhafyarov signed a new three-year contract with Metallurg Novokuznetsk, but if the club gets an attractive offer, it will let Zhafyarov go. The Novokuznetsk club needs some extra cash, while compensation for one of Europe's most talented young forwards is sure to be substantial.

Zhafyarov has already seen interest from the Winnipeg Jets, the New York Islanders, and the Jose Sharks.

Just four months ago, Dynamo defenseman Andrei Mironov played in the world junior championship and now has a chance of joining the national team at the world championship in Minsk. With an average time on ice of about 15 minutes, Andrei not only cuts an impressive figure (189 cm, 88 kg) but also has a top-notch hockey intellect. He is an excellent assistant to teammates, though always makes sure that his efforts on the offensive do not affect his defensive function. In terms of his talent, Western analysts compare Mironov to retired Swedish pro Peter Forsberg.

Andrei's role models are former Russian national team defensemen Darius Kasparaitis and Andrei Markov. He says he would like to repeat Kasparaitis's career and win an Olympic gold for his country. Andrei would also like to play for an NHL club. He will be drafted in 2014 and is sure to become a first-round draft pick. The Chicago Black Hawks have already indicated an interest in the promising young talent.