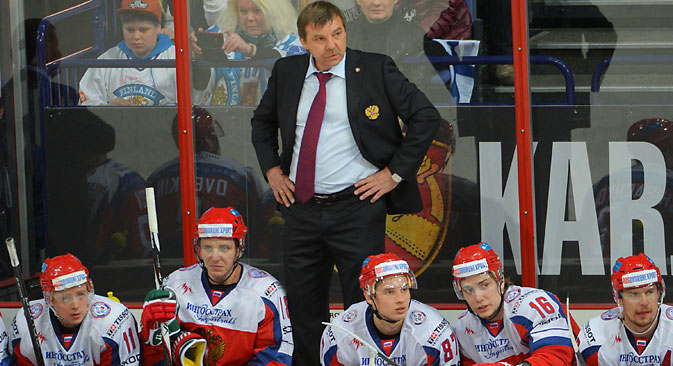 Despite the lack of NHL stars, the upcoming tournament should not be written off as a non-event. The world championships provide a fascinating tactical conundrum to many of the leading sides, and give Russia a chance to rebuild under new coach Oleg Znarok.

Many hockey followers could be forgiven for being less than excited about the upcoming 2014 World Ice Hockey Championship, with the first puck to be struck on May 9 in the tournament opener between Russia and Switzerland.

For one thing, most fans will need a map to find this year’s host nation (it’s Belarus, for some reason). For another, many of the games in the mammoth 11-day opening pool stage mean little to the standings.

And crucially, only half of the stars are there. The NHL playoffs mean some championship rosters are deprived of their brightest talents, or left lopsided with a glut of defensemen, say, and no decent centers.

Without the best players, the tournament’s claim to identify the best hockey nation on the planet is compromised. When it comes just three months after the Olympic hockey-fest, that claim is ludicrous.

But (you sensed there was a “but” coming, didn’t you?), here’s why you should give the World Championship a chance. It’s the thinking fan’s hockey tournament.

After the disappointment of missing the Olympic medals on home ice in Sochi, the team is under huge pressure at home to produce fireworks in the May 9-22 tournament in Belarus.

There is only one problem - Evgeni Malkin, Pavel Datsyuk, Ilya Kovalchuk. Injuries and playoff commitments mean none of these big names are on the roster.

That means an up-and-coming star like Evgeny Kuznetsov of the Washington Capitals could find himself thrust into the first line, or else have to forge a rough-and-ready partnership with some has-beens from the KHL.

Znarok has plenty of options when it comes to deciding who to put in goal. Semyon Varlamov has had a red-hot season for Colorado Avalanche and could yet feature at the worlds as a late addition, although he isn’t yet on the Russian roster.

No Varlamov? No problem. There’s always last year’s Vezina Trophy winner Sergei Bobrovsky of the Columbus Blue Jackets, who should be a favorite to start key games. Backing him up is Anton Khudobin of the Carolina Hurricanes, whose regular-season save percentage of .926 was the fifth-best in the NHL, putting him in the squad for his first world championship.

The third goaltender, Andrei Vasilevsky, is perhaps the most intriguing player on the roster. The 19-year-old snatched the starting goaltender job mid-season at KHL powerhouse Salavat Yulaev Ufa and posted a .923 save percentage in 28 regular-season games, rising to .934 in the playoffs. He won’t get much ice time at the worlds, but it could speed up his transition to the NHL, where he is a prospect for Tampa Bay Lightning.

So who’s not on Russia’s roster? There’s no last hurrah for veterans like Sergei Gonchar of Dallas or Evgeni Nabokov of the New York Islanders, who have given good service to the Russian team in the past but aren’t part of the post-Olympic rebuild.

In a stark illustration of how the mighty have fallen, there’s also no place for Nail Yakupov, the NHL No. 1 draft pick from 2012. Still aged just 20, his stock has fallen through the floor after he posted dreadful stats in his second season with the Edmonton Oilers (including a -33!), failed to make the Olympics and spent the year dogged by trade rumors.

Russia starts with the game against last year’s world finalist Switzerland on Friday before Sunday sees a meeting with nemesis Finland, which knocked Russia out of the Olympics. Cool heads will be needed there.

Next up is another chance at vengeance, this time against the U.S., which beat Russia in Sochi after scoring a controversial goal. After that, the rest of the pool stage should be plain sailing - Kazakhstan, Latvia, Germany and Belarus should not provide serious opposition. Win those three openers and Znarok will be able to rest his best men ahead of the playoffs. Lose and it could be a hard slog.

With the NHL playoffs in full swing, it’s easy to forget there’s another tournament happening on the other side of the Atlantic, but if you can brave the unusual broadcast times, then the 2014 World Championship could intrigue you.