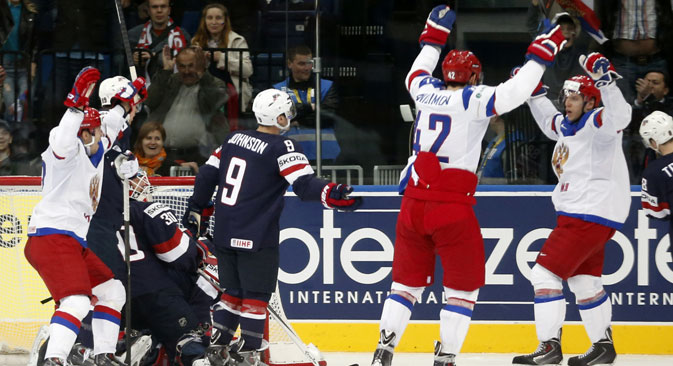 Russia players celebrate their opening goal during the Group B preliminary round match between Russia and USA at the Ice Hockey World Championship in Minsk. Source: AP

Once again, Russia defeated from the US in the World Championship game – which somehow does not particularly please Russian fans.

At the start of the Worlds, team Russia routed the Americans 6:1, President Vladimir Putin made a call to the players’ locker room to congratulate the team, and bookmakers unanimously made the Red Machine their odds-on favorite to win the championship trophy.

However, among Russian fans and experts, there is observed no unanimous inspiration – along with the joy, increasingly one hears talk about the complete decline of this tournament.

“There cannot be any talk of revenge for the defeat in Sochi. First, this is because the Olympic Games are a major event, which no other sporting event can surpass. Secondly, look at the number of players, on all teams, that have refused to play. The prestige of the World Championships is falling,” says legendary Soviet forward Boris Mayorov.

Everyone has gotten used to the fact that in the NBA, or even in the MLB, international basketball and baseball tournaments go unnoticed. Nothing else can be the case in these sports, where the Americans dominate the international tournaments.

This is, so to speak, due to historical and contemporary social realities. However, neglecting of the World Championships by the NHL periodically causes severe irritation in the rest of the hockey community. In the first place, this is due to the fact that the majority of NHL stars today are Europeans.

While the “ignoring” of this tournament by hockey stars from Canada and the United States has long been considered as common practice, this year a wave of refusals came from the Europeans. This process was the most painful for the teams of Russia and Sweden. In all, 21 players refused to participate in Tre Kronor in the 2014 Worlds.

“Swedish ice hockey has provided quite a lot to the NHL players, and sometimes it is necessary to return a debt,” said national team coach Per Morts.

“This is a very big problem. We have a hundred players overseas, but only a handful come here. From our side, we are doing everything to attract the players. We talk with them every time they come back to visit home. Last summer we had a meeting at which this issue was raised. During the Olympics, we also discussed this. What else can I do? Perhaps call the Russian coach?”

However, the Russian national team coach Oleg Znarok will unlikely be able to assist his Swedish colleague. Being famous for their ability to entice NHL stars to international championships were the unforgettable duo Bykov-Zakharkin, who were dismissed from the Vancouver team due to poor results. But then again, in all honesty, we have to admit that some players came primarily because of their loyal attitude and the feeling of being at a resort in the company of friends.

Most of those who refused claimed health problems, but even without looking at the medical records of the players, and wondering how sincere might their statements be, it appears that participation in the Worlds – is not a question of life or death.

“In the old days, it was impossible to even imagine that the best scorer of the country would not go to the World Championships! Yes, because of the refusals, as in the case Mozyakin,” says indignant Boris Mayorov. “Let’s face it – in addition to honor, fame and other things, the national team of the USSR provided even more material values. Now the players in professional clubs earn three to four million dollars a year. And so they fight for these salaries, while the honor of the country is pushed into the background.”

Who will return money to Islanders season ticket holders?

This is how words were exchanged in the clubs on the questions of patriotism and money. Add to this the reluctance of many NHL clubs to release their players for the national team. Moreover, this occurs even when it comes to the Olympic Games.

General Manager of the Islanders Garth Snow went as far as to demand from the IOC – albeit informally – that the organization reimburse New York fans the cost of season tickets due to the injury suffered in Sochi by his captain John Tavares.

Periodically in the hockey community, there are calls to hold World Championships less frequently (twice a year) and adjust their timing not to interfere with the NHL Playoffs. Or renew the World Cup of Hockey – a tournament that previously was called the Canada Cup and which was held in parallel with the Championships.

This was stated after the Olympics in Sochi, in particular by NHL Commissioner Gary Bettman. The implication is that by pulling this tradition from the Cold War era, this tournament could become a better alternative to the World Championships, by virtue of the historical interest shown in North America.

IIHF is against a new tournament

However, the current World Championships is the preserve of the international federation – IIHF, which does not want to share profits if a new tournament, which according to the proposal would fall under the patronage of the NHL.

IIHF President, the Swiss Rene Fasel, called for the preservation of the World Championships in the current format, referring to the fact that European fans should be able to watch their teams live more often. He is supported in this by the head of the Russian Hockey Federation, the legendary Vladislav Tretiak.

Thus, Fasel and Tretiak have formed a kind of lobby group, whose interests run counter to the wishes of the NHL and KHL. Moreover, it should be noted that the Russian League, headed by the chief executive of Gazprom Alexander Medvedev initially found itself in a confrontation with Tretiak and his department.

In the meantime, the world hockey title will be determined not by the best athletes on the planet. For now, players and fans must not be guided by sports interests, but their patriotic spirit.

It is always pleasant when your national team defeats its arch-rival with a devastating score, despite the fact that it includes representatives of the little-known fourth line of players.