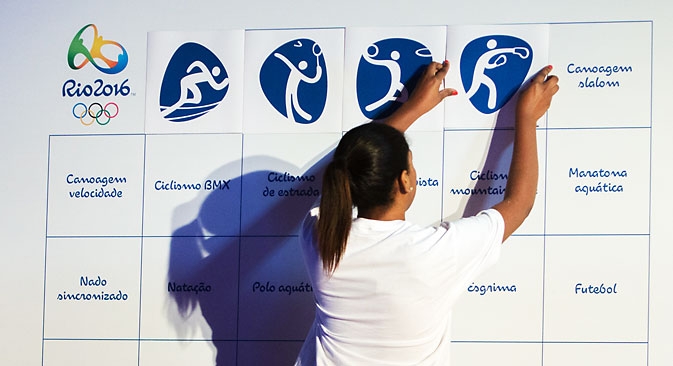 With two years to go, one of the International Olympic Committee’s vice-presidents has called Rio’s preparations “the worst” he has ever seen. Source: Photoshot / Vostock Photo

With the well-publicized scandals surrounding Rio de Janeiro’s chaotic preparations for the 2016 Olympics, speculation is rife that the International Olympic Committee is considering last-minute alternatives. There is historical precedent for reassigning the Games at such a late hour, but could Moscow be a viable contender?

Now is not a good time to be a Brazilian sports organizer.

Protesters crowd the streets, eight construction workers have died building the World Cup stadiums and many infrastructure upgrades will not be finished before next month’s football tournament, making them multi-billion-dollar white elephants.

It’s too late to do much to save the World Cup now - Brazil will just have to make the best of a bad job – but the 2016 Olympics in Rio de Janeiro are a different matter.

With two years to go, one of the International Olympic Committee’s vice-presidents has called Rio’s preparations “the worst” he has ever seen, and a spate of articles have now appeared, citing unnamed “IOC sources”,  suggesting the Games could be moved elsewhere – to 2012 host London, perhaps, or Moscow.

It’s hard to say just how realistic these claims are. The IOC publicly denies that it is considering any move, but it hardly has a reputation for openness. These anonymous anti-Rio briefings could be the work of disgruntled members venting their frustration, or a none-too-subtle public warning to the Brazilians to hurry up, or the real thing – the IOC preparing the ground for an earth-shaking announcement.

The last time the Olympics were reassigned, it took a volcanic eruption. Mount Vesuvius spewed ash over Naples, making the planned 1908 Rome Olympics an unaffordable extravagance. London’s engineers performed an engineering miracle to build an Olympic stadium in just 10 months and host the Games. This time round it would be a little easier for London to step in if Brazil fails to make the grade. Building work would be needed to reverse changes made to the London 2012 venues since they held the Olympics, but the ingredients are all there.

But what about Moscow, I hear you ask? Russia has just finished hosting the Winter Olympics in Sochi, after all, and is ‘holding the World Cup in 2018. Surely the country is as well suited as any to host the world’s biggest sports events?

An “IOC source” quoted by Russia’s R-Sport news agency (full disclosure – I used to work there) certainly seems to think so. “The question has come up as to whether Moscow could take on this role,” the source said.

Don’t hold your breath. There’s one big hitch – Moscow doesn’t have a stadium.

The Luzhniki Stadium was the main Olympic venue for the 1980 Games but right now the only teams it is hosting are the demolition crews tearing out the vast building’s innards at the start of a refurbishment program for the 2018 World Cup. Finishing that in two years would be a miracle. With modern safety requirements, the days when London could throw together a stadium in 10 months are long gone.

As for the other Olympic venues that would be needed, even R-Sport’s optimistic source has doubts. “In Moscow it’s a bit more difficult with several sports facilities - that’s the sailing, the equestrian sport, the cycling road race. There’s no shooting range.”

That, to be honest, is putting it mildly. Moscow is so far from the coast that in 1980 the Olympic sailing competitions had to be held in Tallinn, then a Soviet city but now the capital of independent Estonia. To find a suitable sailing venue in Russia, you might have to head 1,000 miles south to the Black Sea. Various other 1980 arenas have been demolished or fallen into disrepair, with few modern replacements.

All is not lost, however. Russia could still find itself hosting the Summer Olympics in the future, just not in Moscow. Officials in St. Petersburg have been sniffing around the possibility of bidding for the 2024 Games, although so far there has been only lukewarm support from the central government.

"St. Petersburg can be a serious contender to stage the 2024 Olympics," Russian Olympic Committee chief Alexander Zhukov said last year. "At least we need to be thinking about it.”

While Moscow 2016 is just a pipe dream, St. Petersburg 2024 could be feasible, although Russia is a long way from sealing the deal.