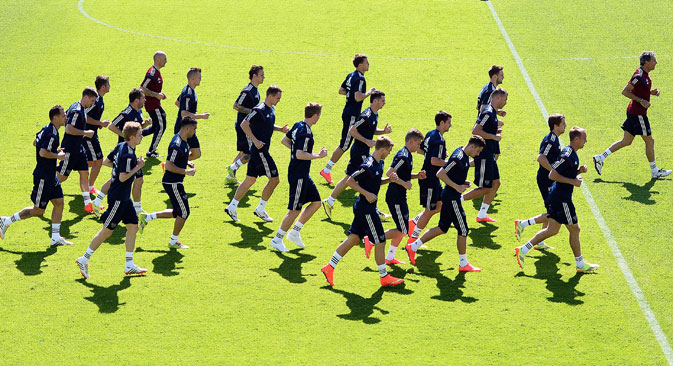 Russia could well be the only team at next month’s World Cup with a roster consisting entirely of players who ply their trade in their home country. Source: RIA Novosti

With a squad of players drawn exclusively from domestic clubs, Russia’s prospects for the FIFA 2014 World Cup in Brazil next month are difficult to call. However, the experience of coach Fabio Capello will prove crucial to achieving the target of a quarter-final berth.

Throughout its history, Russia has sought a special path.

Often flirting with Europe, yet never quite fully dedicating itself to becoming a completely European country, Russia has chosen to go its own way.

Sometimes that has meant challenging world powers, at other times it has meant a life on Europe’s periphery, both geographically and socially. And the same has long been true of Russian sport.

Barring a brief flowering in the 1950s and 1960s when tactical innovation and organized play helped to bring European and Olympic success, the Soviet Union never quite became part of football’s world elite.

All too often, the Soviets were the canvas on which some other country’s masters painted themselves into history – Pele’s Brazil in a 2-0 win at the 1958 World Cup, or Dutch wizard Marco van Basten’s glorious volley to down the Soviets in their last tilt at glory, the 1988 European championship final. One thing was always true, however. The Soviets were always mysterious, fielding a team drawn from a league few outsiders watched, where players were, in an official paradox, full-time amateurs funded by the state.

The Soviet Union may be long gone, but some of that mystery is returning. Russia could well be the only team at next month’s World Cup with a roster consisting entirely of players who ply their trade in their home country.

Capello plays down Russia’s chances ahead of World Cup

While YouTube and global broadcast deals mean the old Soviet mystique can never return in full, the Russian Premier League is far enough away from the global mainstream that its players will be relative unknowns to opposition coaches. Conversely, Russia’s World Cup group stage opponents Belgium, Algeria and South Korea all have their stars playing in the media-saturated leagues of England, France and Germany.

Being slightly cut off from the mainstream has the potential to hurt Russia as well as help – it means that the Russians are less familiar with how other countries play. That’s where Russia’s Italian coach Fabio Capello, the former England manager and noted tactical genius, comes in. The Russian Football Union’s bet is that his experience will allow the Russians to bridge the gap between home and the world stage.

So far, it’s worked a treat. Russia won a qualifying group that also contained heavyweight Portugal to reach the World Cup for the first time in 12 years. In Brazil, the Russians have a relatively easy group and should make their minimum target of the quarter-finals.

Belgium is resurgent in recent years and, as Capello says, “one of the best teams in Europe,” and they have a couple of spies – the Zenit St. Petersburg duo of Nicolas Lombaerts and Axel Witsel, who know all about how the Russians play.

The South Koreans have declined heavily since reaching the 2002 World Cup semi-finals, while Algeria’s team consists largely of players who failed to make the grade for the French team. Capello is unlikely to underestimate the Algerians, however, since they held his England team to a frustrating goalless draw in 2010.

The modest man in black: Why Lev Yashin never lost his humility

The Russians are solid if unspectacular all-rounders and their biggest strength is likely to be good organization, something that’s helped by having 17 of the new 24-man provisional squad come from just three clubs.

Goalkeeper Igor Akinfeev gets to work with the same center-backs he has partnered for almost a decade at CSKA Moscow, while Zenit midfielders Viktor Faizulin and Roman Shirokov have plenty of experience of supplying their club and country teammate, striker Alexander Kerzhakov.

Known as a strict disciplinarian, Capello so far seems to have avoided any national-level repeat of the poisonous rifts that have split some leading Russian clubs in recent seasons. Shirokov was sent away from Zenit on loan this season after arguing with management, but he remains national team captain.

Meanwhile, midfielder Igor Denisov has argued with teammates and management at a succession of clubs, including Zenit, and even lost the national team captaincy, but there has been no hint of insubordination against Capello.

The Italian coach has always favored pragmatism over mercurial talent during his time in Russia. On his day, CSKA Moscow’s Alan Dzagoev can be one of the world’s most exciting creative players, but on other days, he can fade into the background or get himself ejected from the game with kamikaze tackles. Capello has sidelined him. Sure, he’s in the squad, but there’s no sign he’ll be a key player in Brazil.

In attack, there could be a few problems. Neither the veteran striker Kerzhakov nor up-and-comer Alexander Kokorin has been particularly prolific this year and the back-up options are mostly converted midfielders. Old-fashioned strongman forward Pavel Pogrebnyak of English team Reading was in the first 30-man provisional squad, but was swiftly dropped with no explanation given.

Unlike the other coaches in Brazil, Capello also has the task of looking ahead to 2018, when Russia will host the World Cup. To that end, just seven of the current 24 are over the age of 30, with veterans like ex-Arsenal forward Andrei Arshavin and Zenit right-back Alexander Anyukov unceremoniously shoved aside.

One more player must be dropped from the current 24 by June 2, ten days before the start of the tournament in Brazil. Russia starts its campaign June 17 against South Korea in Cuiabá, before taking on Belgium five days later at Rio de Janeiro’s renowned Maracana stadium and Algeria on June 26 in Curitiba.

Read more: Brazil 2014 is a dress rehearsal for Capello