Eastern promise could be the answer for Kontinental Hockey League 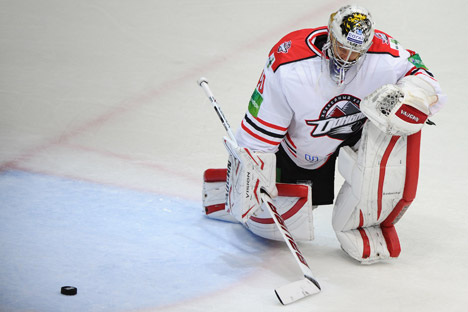 The KHL’s expansion into Europe is under threat: Ukrainian side Donbass Donetsk has seen its stadium attacked and burnt by fighters, while Czech team Lev Prague is struggling with financial problems. But the solution to future success for the league may lie eastwards, not westwards.

The armed men smashed their way into the hockey arena at the dead of night and began hauling away computers and TVs, even striding past shelves of jerseys and scarves to take the safe from the club shop.

They then headed up to the server room, smashing it comprehensively to erase video footage of their spree, before setting the building alight.

It sounds like something from a bad film. Mighty Ducks: The Delinquent Years, perhaps.

But that’s what happened to Donbass Donetsk, the only Ukrainian team in the Kontinental Hockey League, the Russia-based, nine-nation European competition widely seen as the world’s second strongest ice hockey league behind the NHL.

Five Russian hockey talents who may join the NHL

The club is now struggling to rebuild its home (ironically named the Friendship Arena) and blames pro-autonomy fighters from the Donetsk People’s Republic for the raid. In the chaos of eastern Ukraine, assigning definite blame is hard, but there could be a political motive – the club’s owner is an ally of the region’s loudest anti-separatist voice, billionaire Rinat Akhmetov.

For the KHL’s bosses, watching the Friendship Arena go up in smoke cannot have been comfortable viewing. But perhaps even more worrying is the news that another of its clubs, Czech side Lev Prague, could be forced to leave the league due to financial problems.

Lev is not just any European hockey club. As the KHL has expanded forever westward into Europe in recent years, Lev was the shining success story. The Czech team reached the championship finals last season, proving to fans in Central Europe that the KHL’s Russian giants could be beaten, and repeatedly attracted league-record crowds in Prague.

While nothing is official yet, a constant flow of anonymously-sourced stories suggests Lev’s success has come at a price. The club’s Russian rivals have generous financial backing from government-run companies, and in trying to keep up with them, Lev may have sown the seeds of its own destruction.

The political and financial problems facing Donbass and Lev are a long way from KHL president Alexander Medvedev’s vision of his league marching across Europe all the way to non-hockey-loving Britain. "I believe it's the only way not to stagnate and to better develop European hockey," Medvedev said when he unveiled his master plan for so-called United Hockey Europe in 2009.

The KHL has weathered crisis before. In 2011, the entire roster of storied Russian club Lokomotiv Yaroslavl died in a plane crash on the way to its first game of the season. Yaroslavl, near Moscow, is about the closest Russia has to Hockey Town and it was a city in mourning as Lokomotiv took a year to rebuild before returning to the KHL.

The Lokomotiv Yaroslavl disaster was tragic, but it was a disaster the KHL could respond to. The Donbass and Lev developments, however, threaten the league’s entire vision for the future. If European expansion is no longer viable, what can the KHL do?

Now there seems to be an answer. “If you pay close attention to the development of hockey in Asia, then in time you could create a whole KHL division, which Chinese, Korean and Japanese clubs could go into,” the chairman of the KHL board, Gennady Timchenko, told Russian media last week. That plan has the backing of International Ice Hockey Federation president Rene Fasel, Timchenko said, while NHL legend Sergei Fedorov has long advocated a similar scheme.

Timchenko is a man who makes things happen. Not just a league official, he is also president of the SKA St. Petersburg club and one of three Russian investors who have taken Jokerit, a club from Helsinki, out of the Finnish league and into the KHL for next season.

Outside hockey, he is a billionaire businessman seen as close to the Kremlin, and has his own reasons to look for new markets – he is on a U.S. sanctions list over the Ukraine crisis.

Heading into Asia has challenges of its own. China, for example, has “around 500 players,” according to Timchenko, and its national team managed to lose to Mexico, New Zealand and Turkey in April – hardly the sign of a thriving hockey country.

However, there are green shoots. Asia League Ice Hockey started play in 2003 with teams from China, Japan and South Korea and while the arenas are tiny and the quality of hockey a long way from North American or even European standards, the league has so far managed to remain financially stable, suggesting a market is there.

With South Korea set to host the 2018 Winter Olympics and Beijing the front-runner in bidding for 2022, governments in the region may also be looking to strengthen local hockey.

The huge geographical distances involved are also no problem for the KHL, which already has teams in Zagreb, Croatia and Vladivostok, Russia – a full 5,000 miles apart. Even if Russian hockey fails to take Asia by storm, the potential audience is so large that even being a niche sport means a huge audience.

The KHL is facing difficulties in Europe, but those could turn into opportunities. By striking now in Asia, before the NHL can gain a foothold, the KHL could fundamentally alter global hockey’s balance of power.