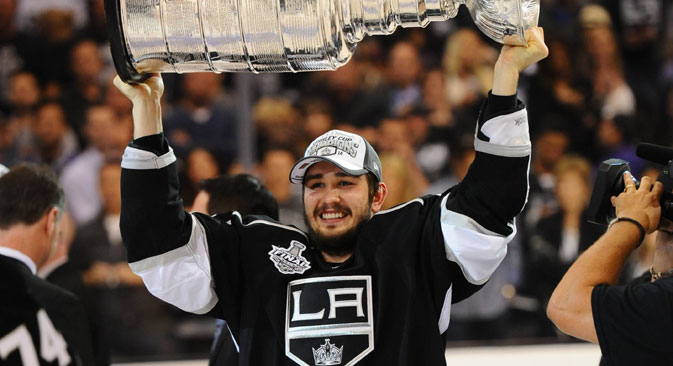 The 2013-2014 ice hockey season ended with the Los Angeles Kings lifting the Stanley Cup. RBTH looks back at the highlights of the NHL playoffs and how performances by key Russian players affected the outcome of the tournament.

The 2013-2014 season is over in the NHL. Los Angeles Kings are the new Stanley Cup holders after their double-overtime win over New York Rangers in the playoff finals. But what part did the NHL’s Russian contingent play in shaping this year’s tournament?

Russia's Vyacheslav Voynov, playing for Los Angeles Kings in the NHL, continues to strengthen his position as one of the league's best defensemen. This year Voynov not only won the playoffs with the Kings, but also became the youngest winner of two Stanley Cups in NHL history. Moreover, he did it in just two seasons.

The Russian scored 34 points in 84 games of the regular season (breaking his personal points record) and seven goal+pass points in the playoffs. He also reached an important landmark of 50 Stanley Cup games and made a sizable contribution to his team's win in the final series.

And yet, this season was very hard for Voynov, especially since he started it right after signing a new six-year contract worth a staggering $25 million, which clearly weighed heavily on his mind. To become the best-paid defenseman in a top team at the age of 25 is no easy thing.

Throughout the tournament, Voynov had some bad games but even in the most difficult moments, he never lost the trust of the team's head coach Darryl Sutter. The coach's support had its effect: As the season progressed, Voynov significantly improved his technical arsenal, making more short-handed-game appearances, taking more shots from difficult positions and becoming more active in the offensive zone.

The injury Evgeni Malkin received before the Sochi Olympics prevented him from fully demonstrating his talents in this season's Stanley Cup. In the first playoff round, "Geno" took a long time to come into his own but he managed to reach peak form by the time of the decisive game. With Pittsburgh Penguins leading 3:2, Malkin scored a hat trick against Columbus and goalie Sergei Bobrovsky to send the Blue Jackets packing. After that game, experts began to talk of Malkin's full-scale comeback, however in the next round New York Rangers' defense managed to successfully thwart the Russian and his star partner, Canada's Sidney Crosby.

For a third time in five years, the Penguins failed to nail a victory down while leading 3:1 and 3:2 in the playoffs. The team, which after its 2009 victory should have gone on to become a dynasty and win a couple more Stanley Cups, has once again disappointed.

Change of roles for Russian goalies

The first playoff round saw a showdown between two Russian goalies, Minnesota Wild's Ilya Bryzgalov and Colorado's Semyon Varlamov. The latter was considered to be a clear favorite to win, but trouble came from where nobody expected it. One of the main contenders for the Vezina Trophy (awarded annually to the best NHL goaltender), Varlamov was a pale shadow of himself in the regular season, whereas Bryzgalov, on the contrary, rose from the ashes. The 33-year-old goalie, who had been all but written off after he left Philadelphia Flyers, had one game without a single goal into his net and in the decisive seventh game of the series made an incredible save when faced one-on-one by Patrick Sharp.

Bryzgalov's wonderful performance allowed Minnesota to create the main sensation of the playoffs and put up a good fight against Chicago. Source: Youtube

In the conference semi-final, Minnesota produced a decent performance when faced with the season's main favorite, Chicago. Bryzgalov once again managed a clean sheet in one game and twice made it to the top three stars of the day. In the end, Chicago Blackhawks proved to be stronger and won the series (4:2), but it looks like Bryzgalov has secured himself a new contract. Minnesota general manager Chuck Fletcher has already made it clear that the club wants to keep the Russian goalie.

Montréal Canadiens defenseman Andrei Markov has further boosted his standing by augmenting his solid regular season performance with excellent results in the playoffs. In the fifth game of the conference finals with Rangers, for the first time in his career he had three assists in a Stanley Cup match, scoring more than 10 points. Markov remained persistently dangerous on power plays, taking numerous shots, but too often got carried away in the attacking zone. Unfortunately, there was no one to back him up. Markov's usual partner Alexei Emelin had to miss the critical playoff games due to injury.

Alexei Emelin's hit made it into all highlights of this season's Stanley Cup. Source: Youtube

Markov, who has been playing with Canadiens since 2000, practically single-handedly dragged his team into the conference finals and was one of the best defensemen in the playoffs, coming within inches of the coveted trophy. This time round, his team lost to Rangers, who for the first time in 20 years made it to the Stanley Cup finals.

Detroit went out of the tournament in the first playoff round. In its games with Boston, the Red Wings gave up without a fight, with Pavel Datsyuk the only player in the team who deserved to continue fighting for the trophy. Detroit's early departure allowed Malkin to outstrip the 35-year-old Datsyuk and become the third biggest scorer among Russian players in the Stanley Cup. Malkin has now scored 109 (41+68) points in 93 playoff games in his career, while Datsyk has 108 (39+69) points in 145 games.

Read more about Russians in NHL