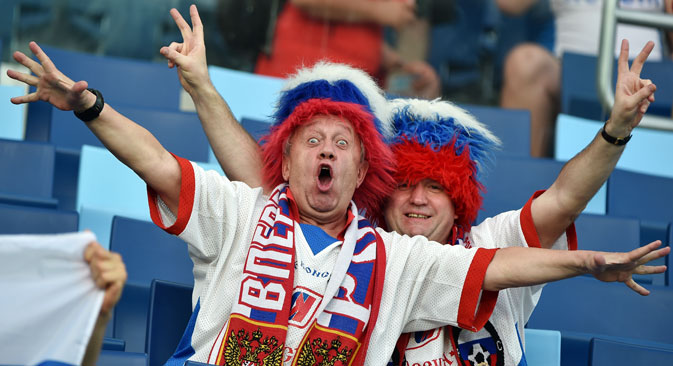 The fans in the stadium were soon cheering on Capello’s team, drowning out the chants of the numerous Korean contingent. Source: RIA Novosti

Russia played its first match at the World Cup in 12 years on June 18 in the Brazilian city of Cuiabá. Pavel Zarudny experienced the atmosphere in Cuiabá leading up to the opener and watched Fabio Capello’s team open its Group H campaign with a 1-1 draw against South Korea.

The Russian national football team’s first match at this year’s World Cup took place in the geographical center of South America, in Cuiabá. I flew from Congonhas Airport on an airline with the appropriate name of Gol. Among my fellow passengers was a group of 15 fans from the Urals city of Perm. These lads, who had flown in for all three group matches, told me that they had specifically planned their vacation to coincide with the start of the World Cup.   They said that each of them had managed to save 3,000 euros for the trip, since they knew that “it would be hard to get by on anything less.”

When I asked them how far they thought Russia would make it in the tournament, they were upbeat: “Well, they will definitely make it out of their first group,” said one fan, “but who knows what will happen next, we are Russians after all. We’ve got rivals everywhere.”

We thought were boring three Korean girls in the row next to us, but alas, they just smiled at all my questions…

The city of Cuiabá was blanketed by sultry weather and crowds of Russian football fans were milling about aimlessly. “It's as if the World Cup were held in Urengoi [a town in the northern Siberian tundra], except that the weather would be the opposite, but it would be boring nonetheless!" said one.

By the way, after talking with locals, it turned out that all the beauties - the jungles and waterfalls with crystal clear water – that are written about in the guidebooks, are located an hour’s travel from the city. However, although the fans wanted to get there it would have been a long and expensive trip, so the bulk of our fans waited for the start of the match in cafes and bars, singing songs.

At Arena Pantanal, on the contrary, life is in full swing: Four hours before the match, the stadium was literally overrun by Korean journalists. “Where did they all come from?” lamented one Russian colleague from a major sports publication.

No thoughts of celebration for Capello

One day before the game, Russia’s players went through a one-hour pre-match training session at the Arena Pantanal stadium. “We are well prepared for the match against Korea, and we’ve done everything necessary for this. So now I am fully confident in the team,” Fabio Capello said before the game.

“We know the capabilities of Korea. We have the same strengths. In the upcoming match we need to play smart, and it is important that the players are confident in each other.”  Capello made a point of playing down his 68th birthday, which coincided with the match. “For the team’s game, my birthday is irrelevant,” said the Italian. “Of course, it will be nice if everything comes together, but for now I’d prefer to speak of other things.”

As for the players, the mood in the Russian camp before the match was excellent. “We are confident that during the game we will do everything in our power to get Russia a win. There are no weak teams at the World Cup, and each of these matches will be difficult. But we are not afraid of anyone and will do our best to do well,” said new team captain Vasily Berezutsky to reporters.

Kerzhakov to the rescue

After twelve years, the Russian team has again won the right to play a match in the final stage of the World Cup. This exciting event was met by a choral rendition of the national anthem by the fans in the stands. The fans in the stadium were soon cheering on Capello’s team, drowning out the chants of the numerous Korean contingent.

There was little to choose between the sides in the first half, and although Korea controlled the tempo of the game, the only dangerous moment of note was Ignashevich’s shot in the 31st minute.

However, in the second half the Russian fans were silenced by a 68th-minute strike by Lee Keun-ho, who opened the scoring when Russian goalkeeper Akinfeev, who had looked uncomfortable all evening, committed a devastating error by fumbling the Korean’s straightforward shot into his net. Fortunately for the Russian fans, the team managed to avoid defeat. In the 74th minute, substitute Alexander Kerzhakov reacted quickest after a scramble in the penalty box and drove home to level the scores – and keep Russia’s chances of reaching the next stage alive.