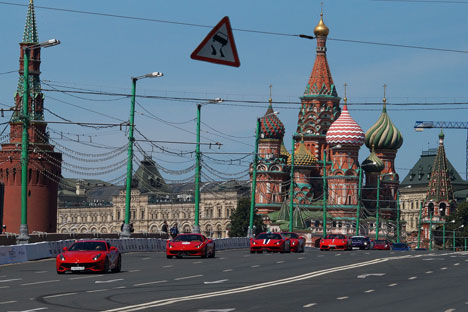 With attendances at the capital’s new Moscow Raceway soaring and Russia’s first ever Grand Prix on the horizon in October, the future of motor racing is looking bright in the country. RBTH’s sports expert James Ellingworth found out more.

As soon-to-be hero Mario Goetze and his teammates prepared to take the field against Argentina in last Sunday’s World Cup final, another German sporting triumph had already taken place that day.

Eight hours earlier and 7,000 miles away, Germany was getting Russia all fired up about auto racing.

The appropriately Teutonic-sounding Deutsche Tourenwagen Masters had roared into town, drawing a record crowd of 50,000 to the Moscow Raceway ahead of Formula One’s debut in Russia in October.

With engines alternately roaring like an out-of-control Cerberus or buzzing like a demented bee, watching DTM cars in action at the track is a whole-body experience. At the raceway’s best overtaking spot, the sharp, fast left-hander that is the last of the 15 turns on the 2.5-mile track, the ground shook with the sort of bass vibrations usually found at a nightclub.

The cars look like mutated versions of Audi, Mercedes and BMW road cars but underneath that imitation skin they are purpose-built racing beasts closer to a Le Mans car than anything you’d find on a public highway.

And the Russian crowd loved it.

In a country where people tend to prefer watching sport on TV to going to the event, meaning frequently dismal crowds even at soccer or hockey games, the attendance was not just a record for racing in Russia, but a coup for the country’s sports scene as a whole. Even more surprisingly, this happened despite tickets for race day costing a minimum of 1,700 rubles ($49), far above the usual price for a sports event in Russia.

Admittedly, the stands were far from full, but that’s mostly because Moscow Raceway – a labor of love by banking magnate and racing enthusiast Rustem Teregulov – has been built with plenty of room for the audience to grow.

Even though the Moscow Raceway only opened two years ago, it is already attracting a healthy mix of newbies and hardcore race fans, the sort who go around wearing T-shirts bearing notoriously misanthropic Formula One driver Kimi Räikkönen’s pithy comments.

Having been to most meetings since the raceway opened, while there’s a few extra cheers for local talent, this writer can testify to the fact that the crowd’s enjoyment doesn’t depend on fast Russians. That was just as well on Sunday, as ex-F1 driver Vitaly Petrov utterly failed to adapt to the demands of DTM, where he is racing for the first time this season, coming in a distant last among the cars that finished the race.

Russia’s newfound love for auto racing has even left a few fans with divided loyalties. In each of the last three years, some of the Moscow Raceway’s biggest competitive weekends have clashed with Moscow City Racing, a rather similarly-named demonstration of race cars around the walls of the Kremlin – a photogenic way of getting the sport to a wider audience, though without the competitive thrill of a real race.

Russians are taking up racing too. Petrov blazed the trail at the peak of motorsport, but never threatened to break into the world’s elite, although emerging star Daniil Kvyat is giving a very solid account of himself in his debut F1 season. At the other end of the talent scale, a succession of Russian millionaires and billionaires have bought their way into teams racing in GT competitions, most notoriously Vadim Kogay, a video of whose dreadful driving of a garishly lime-green Ferrari at Italy’s Monza racetrack has gathered over 800,000 YouTube views.

The moment of truth for Russia’s new auto racing obsession will come in October, when Sochi’s new Olympic Park racetrack hosts F1’s first Russian Grand Prix. Transferring DTM’s popularity to the south of Russia may not be all that simple, however.

The first issue is the sheer distances and costs involved. F1 tickets are more expensive, but the real problem is the travel – flying 850 miles south to the Black Sea coast is a rather costlier trip for a Moscow family than driving 60 miles to watch DTM.

Sochi’s crowds for the Winter Olympics were also helped by the fact that visitors could make a real holiday of it and go skiing at nearby resorts. The Grand Prix’s fall date doesn’t really make that an option, although plans are reportedly in motion to move the race to the summer for 2015 to link in with Sochi’s potential as a beach resort.

Sochi’s organizers are staking a lot on fond Russian memories of the Olympics and the inherent glamor of F1, undoubtedly the peak of auto racing, certainly outside the U.S. As the years pass, Russia may catch the bug, but traveling to Sochi for a race is likely to remain the preserve of the well-off.

With those threats on the horizon, the Moscow Raceway is rather presumptuously hinting it could step in if Sochi flounders. The track would need only a few minor upgrades to be fit for F1, and ahead of last weekend’s DTM success, raceway spokesperson Yekaterina Beltsevich was bullish in comments to the ITAR-TASS news agency.

“We’re sure,” she said, “sooner or later this track will host a Formula One round.”