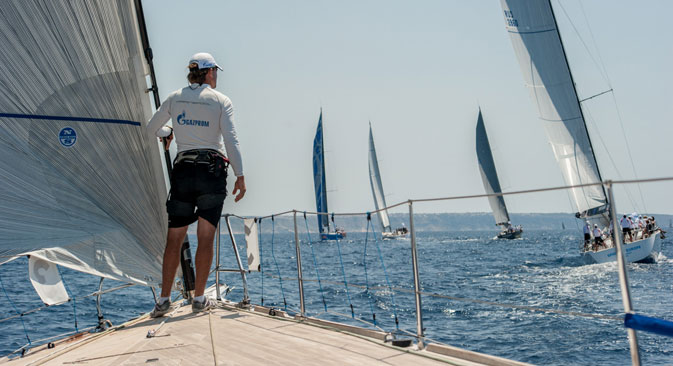 The Swan 60 Class World Cup is a part of the famous Copa del Rey Regatta in Mallorca. Source: Andrey Sheremetev

The Spanish island of Mallorca this year saw the new face of Russian sailing: 15 yachtsmen from the Gazprom Youth Sailing Challenge program demonstrated at the prestigious Copa del Rey Regatta that they are ready to compete at the highest level.

Cloudless skies, a light sea breeze and the sound of Russian being spoken – these are the things that will be remembered in Palma de Mallorca about the first week in August. But this is nothing to do with tourists: The annual Copa del Rey Regatta, organised by the Royal Yacht Club of Palma, featured a large number of Russian participants this year.

Some of them are as young as under 25, which is a rare thing in sailing. The team on the Tsaar Peter yacht, which competes in the Swan 60 class, met and formed a crew only three months ago. After passing through a rigorous selection process, these young sailors have weeks of training and a multi-stage race in the Baltic Sea under the belt. Many of them, even a year ago, could hardly imagine themselves performing at such a high level.

The Gazprom Youth Sailing Challenge is the only Russian private program to support yachtsmen. Talented athletes can also count on government and municipal grants to aid with the costs of traveling to competitions, although obtaining them involves a lot of bureaucratic formalities. Professional sailing depends almost entirely on sponsorship for both individual yachtsmen and whole teams.

“When I learned about the selection of a crew for a sixty-foot yacht, I decided to test myself on it, as I had no other opportunity to race on such large boats,” says Marat Hairov from Dolgoprudny, a Moscow suburb. Marat is one of the 15 finalists in the Gazprom Youth Sailing Challenge program, which has been established at the facilities of the St. Petersburg Yacht Club.

“It was originally our initiative to set up this project, and later on we received support from Gazprom,” says Anastasia Gracheva, PR director of St. Petersburg Yacht Club.

“For many reasons, including the communication barrier, it is difficult for many Russian yachtsmen to enter the global professional labor market, which is dominated by the English, Americans, Australians and Germans. We want to bring our lads up to this new level, so that they can enjoy being in demand for themselves, and earn a good reputation.”

The organizers received some 150 entries from all over Russia: from the Pacific city of Vladivostok to the southern town of Azov. The selection process whittled the numbers down to 15, and in May they formed the crew of the Tsaar Peter, one of seven boats competing in the Swan 60 class. There was no time for dawdling - after just five days of training, the team set off for their first regatta, the Nord Stream Race. In four days, the sailors crossed the Baltic, having worked their way from St. Petersburg to the German port of Warnemünde. A new challenge awaited them in August – the Swan 60 Class World Cup, which is a part of the famous Copa del Rey Regatta in Mallorca.

Moving up a level

Ivan Izmestyev, a native of Togliatti (in the Samara Region, 500 miles southeast of Moscow) came into the Gazprom Youth Sailing Challenge program from Olympic sport. “Earlier, I competed in Finn yachts, which is a small boat where you are your own boss, as you steer the wheel, you think about the course, and you look after the sails,” says Izmestyev.

“On a big boat, everything is different: Here, you are part of a team, and the tactics are completely different. Olympic sports don't offer many opportunities – after an amateur career you either retire or become a coach.”

In Izmestyev’s opinion, participation in a program like this is a big chance for Olympians. “I’m impressed by the team's training process: the training base, the study program – everything has been carefully thought out. And the most important thing is the good prospects – with such experience, you can fulfil yourself in professional sport,” he says.

Marat Hairov agrees with his fellow yachtsman. “When you are an amateur, you have quite a few chances to become a professional,” he says. “Here we have an opportunity to sail on large yachts, and interaction within a team is at a completely different level. At the end of the season, the best of us will be chosen based on our progress in the sport, so everything is fair.”

The young team surprised everyone on the very first day of racing in Mallorca: In the first race, the crew of the Tsaar Peter left all their competitors behind. Over the following days adjustments were made, but the young team achieved consistently good results and took fourth place overall after all of the races.

Another Russian yacht, the Bronenosec (‘Ironclad’ in Russian), led by the head of the St. Petersburg Yacht Club, Vladimir Liubomirov, also celebrated victory. It was on this boat that the best sailors from the youth team will work in the future. The other members of the team will acquire important experience that will help them in their future careers.

“The lads are young, and they all want to work and learn. I am sure that many of them possess all the qualities to ensure high performance among the professionals,” says Sergei Borodin, coach of the Gazprom Youth Sailing Challenge team.  “It's absolutely outstanding to meet another team on this level; they were in the lead at some races, it's fantastic, the spirit of their team is good, the guys are always smiling,” says the famous German yachtsman Arne Hirsch, manager of the German Offshore Challenger project, and a guest of honor at the Swan 60 class competition.

An impetus for Russian sailing

Vladimir Liubomirov is convinced that this program to support young yachtsmen is not only about sport but also of social value: “Back in the 90s, we at St. Petersburg Yacht Club began to think about the problems of social adaptation of Olympic athletes. Once an athlete has gone through several Olympic cycles (in sailing such athletes are far beyond 30 years of age by this time), they had nowhere to go on to work,” he says. “It’s impossible to combine this high performance sport with studies to obtain a qualification in a different profession.”

The National Academy of Sailing was established in 2013 at the St. Petersburg Yacht Club. The Academy’s main objective is to develop national sailing classes and to teach children from scratch. The academy now has about 300 children, and studying there is free of charge.

“The real prospects for such yachtsmen lie in professional sport, where they can compete for a rather long time and earn good money,” he continues, adding that until recently there were hardly any Russian professionals, and even Russian teams preferred to recruit foreigners. “The objective of the Gazprom Youth Sailing Challenge program is to find the best Russian yachtsmen and women up to 25 years old, to train them, to show their faces to the world and to give them an opportunity to find a job,” he explains.

Liubomirov is confident that if the Gazprom Youth Sailing Challenge program turns out to be a success, it will contribute to the development of children's sailing. “Many of those children aged 14–15 and their parents who think about whether to stay in the sport will have additional motivation: Everyone can see a career path,” he says.

“The world of professional sailing is a very large one, and although the earnings of yachtsmen are not as big as in football or tennis, you can compete for a very long time, and no one is sitting around without work.”