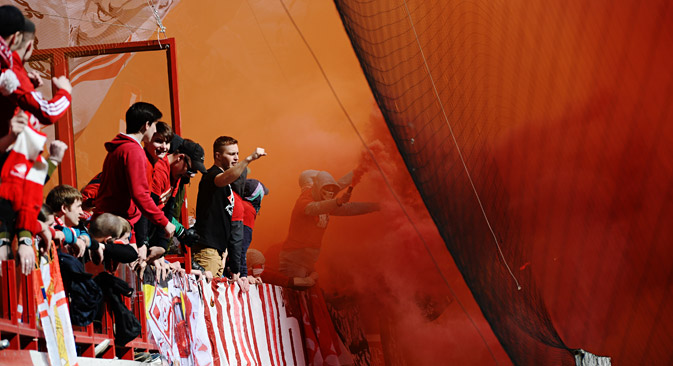 The big media worry is that Russia’s World Cup could be plagued by racism and violence in the stands. Source: Alexander Vilf / RIA Novosti

With Russia hosting the FIFA World Cup in 2018, police are being challenged to change the way they provide security at sports events following a series of recent outrages over indiscriminate treatment of soccer fans at stadiums around the country. James Ellingworth argues that developing a fresh approach to policing should be a priority for Russian sport.

With Russia’s first World Cup less than four years away, construction of the host stadiums is now beginning in earnest, 12 vast projects spread across the country. But it’s not the only work in progress.

However much concrete is poured and however many new transport links are set up to speed fans across Russia, it won’t mean much without some crucial changes to hearts and minds.

The big media worry is that Russia’s World Cup could be plagued by racism and violence in the stands. But while Russian soccer certainly does have a problem with hooligan groups that support some of the country’s biggest clubs, there’s another element to stadium security, and one that World Cup organizers have far more control over – the police, as two recent incidents show.

Russian fans are in uproar after over photographs from a match on Sunday, August 31 in Siberia showing local police beating a disabled fan who has no legs. His crime? Sitting a few rows in front of people waving flares. Last month, there was outrage when police in the World Cup host city of Kazan demanded that if female fans of visiting team Spartak Moscow wanted to get into the stadium, they had to strip naked for searches by male police officers.

Perhaps the most important result of Russian law enforcement’s fight against hooliganism over the last two decade has been that police now often treat all fans as potential enemies. Sometimes that comes with severe consequences for ordinary law-abiding fans – the sort of people who make up most of any Russian football crowd and who will come to Russia from abroad in their hundreds of thousands in 2018.

The incident with the beating of the disabled fan in Siberia follows a classic pattern at Russian games. A relatively low-end and commonplace illegal act such as lighting flares escalates when police decide on collective punishment for all the fans in a particular sector, striking out at anyone who can’t climb out of the way fast enough. On Sunday, that meant beating a disabled fan. The indiscriminate police response angers the rest of the fans, and before you know it, there’s a full-scale brawl between supporters and police. All too often, stadium disorder is a self-fulfilling prophecy.

A similar mindset led to the strip searches. Flares are common at Russian games, and they have to get into the stadium somehow, so for a few years now, police in various cities have made statements alleging female fans smuggle them past security in an – ahem – intimate location. However, since there are no records of anyone ever being prosecuted for concealing pyrotechnics in that way, it’s not clear whether it’s simply an urban myth. It certainly doesn’t seem like the invasive, degrading searches in Kazan found any contraband. If they had, the police would surely have mentioned that in the rambling statements of self-justification that followed.

Paranoia and collective punishment are no way to police a game, and some senior figures in Russian soccer think the solution is to remove the police from the equation altogether.

Most Russian sports teams currently have few, if any, stewards and security personnel of their own and rely on the police, but that is beginning to change. Russian Premier League soccer chiefs dream of “invisible security” similar to what you see at games in Europe or North America – stewards who step when there’s trouble and try to solve it with the minimum of conflict.

Stewards will be a key part of the 2018 World Cup but they come with challenges of their own. One particular difficulty is stopping the police from turning up in force anyway. Two years ago, the pre-season Russian Super Cup match between Rubin Kazan and Zenit St. Petersburg, not considered an especially volatile fixture, was supposed to be a showcase for “invisible security” until heavily-armed police turned up, leading to this meek quote from the league’s safety director, Alexander Meitin, after he tried to turn away the cops and won a partial victory. “We were able to get the people to leave who were equipped with specialized ammunition,” he said. Quite an achievement.

Of course, police can’t be cut out of World Cup plans altogether and relying solely on stewards has dangers of its own. To help minimize the risk of conflict, many stewards in Russia are recruited from among the fans, which can effectively mean supporters keep each other in check. That was highlighted as a failing back in May when Zenit fans stormed the pitch during a game against Dynamo Moscow, attacking an opposition player. Video of the incident shows a curious lack of stewards near the stand holding the troublemakers, Zenit’s hardcore support, prompting allegations that some of them had colluded in the incident.

As in so many other areas, the experience of hosting the Winter Olympics in Sochi in February will be crucial for World Cup stadium security. In Sochi, police were mostly out of uniform and typically polite, using the help of Olympic volunteers to bridge the language gap with foreign fans, while also watching out for terrorism threats and unsanctioned protests.

Not everything directly carries over to the World Cup, of course. Police are always likely to be more polite to the old ladies who watch figure skating than they are with energetic young soccer fans.

Attitudes on both sides, among police and Russian fans, still need to be changed before the World Cup. As with the stadiums, progress is being made but much work remains.