Elena Vesnina: ‘We’ve done something great for Russia at the U.S. Open.’ 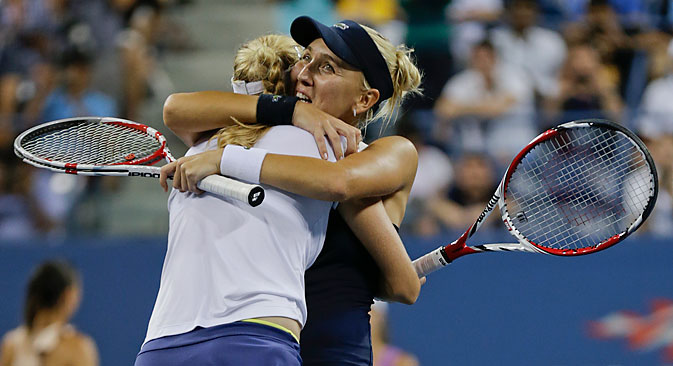 Russian tennis player Elena Vesnina, who has won the U.S. Open doubles with Ekaterina Makarova despite having an injury, talks about her path to the prestigious title.

Tell us about your initial emotions and feelings after your success at the U.S. Open.

We were incredibly happy to win at our second Grand Slam tournament (Vesnina and Makarova won at Roland Garros in 2013 – RBTH). Honestly, we did not expect this at the beginning of the tournament, although our game was already significantly better than it had been in mid-season. After we beat the Williams sisters, we gained some extra confidence and the rest of the matches turned out well for us - though the final was probably the hardest match all the same.

In general, how can matches like the one with the Williams sisters change the course of a tournament?

Actually, matches like that have a great effect on your confidence. The Williams sisters were playing at home in a packed stadium that was fiercely behind them. And of course, when you win such a match, you immediately experience an immense joy and realise that there is no longer anything to fear.

Getting back to the final, you recently lost to Martina Hingis at the tournament in Miami. There, it’s true, she was paired with the German Sabine Lisickiand not with the Italian Flavia Pennetta. Did this have any particular effect on your mood?

Well, we had already lost to Hingis and Pennetta at Eastbourne, so Katya and I knew their game a bit. Of course, we wanted to get revenge and didn’t want to lose to Martina three times in a row. So we set ourselves up very seriously. At the beginning of the match, we were very nervous, since the game was being held on the center court and there was a huge number of spectators, who were very active. What’s more, we were playing with injuries and you could say we pulled through the last games by the skin of our teeth.

Does a big interest by the audience in a match and the atmosphere in the stands provide inspiration or the increase the pressure?

Sometimes, of course, it inspires courage. But if the entire stadium is against you, it is unpleasant. In New York, however, the stands are international. There are lots of tourists and everyone feels neutral enough. Non-favorites are often supported there. Even during the match with the Williams sisters, we felt, of course, that the audience wanted them to be victorious, but they reacted with applause to our beautiful rallies and to the games we won. But in the final, all we thought about was that this was the deciding match of a Grand Slam tournament; we only watched our own team and coaches and didn’t pay attention to anything else.

Could you feel any tension due to the political situation, seeing as you were playing in the U.S.?

No, we didn’t notice anything. Sports are outside politics, and that was how it was there.

You entered the final with an injury and Katya had a long, successful single tournament (Makarova reached the semi-finals at the U.S. Open - RBTH), and your opponents were fresher. Did you feel this during the match?

Yes, of course. Katya played a lot of matches. I also played. After the tournament we discussed the fact that we were very lucky that we had never had to play two matches in one day. It turned out that one day we were playing singles and the next day we were playing doubles. It’s true that because of this we didn’t have a single rest day, but we were physically prepared. We felt tired, of course, but when you play at the end, you want to finish the job. And after the final we felt such a mad elation, but the main feeling was one of emptiness. After the tournament ended, I felt as if a great weight had been lifted from my shoulders, but I had no energy or emotion left at all.

And do you feel the taste of this victory now?

I’m still getting used to the feeling a bit, but in general yes. At the very moment of success itself, we don’t always understand what has happened. And now we’ve returned to Moscow, we understand that we’ve done a great thing for ourselves and even for the country.

Last year, you made it to the final at the final doubles tournament of the year. Have you and Makarova set yourselves the task of winning this tournament this year?

Katya and I very much wanted to get to the final tournament for the second year in a row and we qualified for it. Last year we really liked the atmosphere. The best of the best play there. We were there when four pairs were competing, and this year there will already be eight pairs. And they promise that there will be some kind of fabulous festival in Singapore; there’ll be a show, and everything will be very interesting both for the players and the spectators, for the tourists who come. And, of course, we’re setting ourselves the goal of winning. Especially since Katya played with an injury at the final tournament last year.

Is this the famous Russian character: the worse, the better?

Yes, probably. Katya and I joke that we play better when ‘injured’.