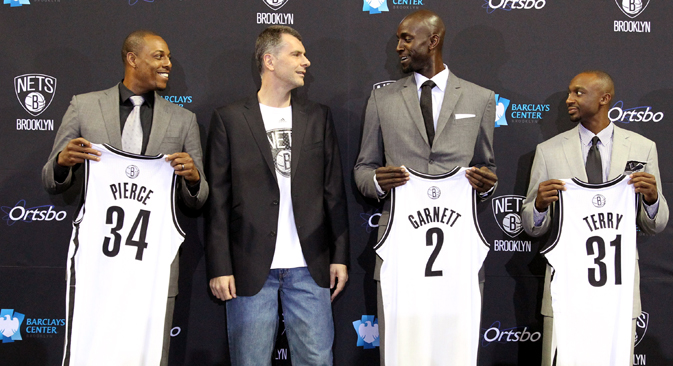 As the NBA season opens, Brooklyn Nets players and fans are hoping they can finally make the most of the star power and deep wallet of the team’s owner.

As the 2014-2015 NBA season gets underway, sportswriters have mixed expectations for Mikhail Prokhorov’s Brooklyn Nets. The team underperformed in the off-season and has a new coach and few notable new players.

But Prokhorov has never minded being the underdog.

In 1992, at the age of 27, Prokhorov partnered with Vladimir Potanin to run Interros, a holding company in effect created to buy Norilsk Nickel, one of Russia’s largest nickel and palladium mining and smelting companies. When he left the company in 2007, his share of the venture was $7.5 billion. In March 2012, he ran for president against Vladimir Putin. Although he won only 8 percent of the vote, he came out of the race a national political figure and later founded his own political party, the Civic Platform Party.

In 2009, Prokhorov made the offer to buy a controlling interest of the New Jersey Nets, and the Barclays Center, the centerpiece of land developer’s Bruce Ratner’s $4.9 billion, 22–acre Atlantic Yards Project, a commercial and residential development in downtown Brooklyn. The NBA approved the sale of the Nets to Prokhorov in May 2010, and Prokhorov paid $200 million for an 80% stake. He also acquired a 45% interest of the Barclays Center.

Today the Brooklyn Nets is a franchise worth $780 million – the fifth richest team in the NBA – and while an NBA championship may be within the team’s grasp, its owner has already galvanized great enthusiasm for an expanding international fan base.

“Mikhail’s certainly been a very visible presence. There has been a lot of curiosity about him,” said Irina Pavlova, President of Onexim Sports and Entertainment Holding USA.

“Some call him ‘the most interesting man in the world.’ It’s been fun to watch the fans and the media try to figure out who he is and what he’s about.”

According to a story on a Nets fan site shortly after Prokhorov bought the team, Prokhorov’s advisors “includes mostly Russians, a French banker and several Americans he relies on for legal, financial, public relations and basketball advice.” Christopher Charlier, along with Dmitry Razumov –‘Prokhorov’s #2’ - surveyed the Brooklyn landscape in the summer of 2009 and recommended that he buy the Nets.

“We get along quite well. Many of us had worked together for many years before joining Onexim,” said Charlier. “There is no long bureaucratic process or hierarchy. We feel comfortable sharing ideas and discussing the issues.”

During the construction of the Barclays Center, some local residents felt big business and luxurious real estate contaminated the essence of Brooklyn. Much of the criticism has died down recently, since now it is “cool to be a Nets fan,” according to Pavlova.

“We thought it was natural for there to be speculation and criticism while the arena was being built… once Brooklynites actually saw the arena open, and had a chance to visit for a game, the criticism went away basically overnight,” Pavlova said. “I’m proud to say we do lots of community outreach. The Nets are often visiting schools, community centers and local sports facilities, engaging with Brooklynites… We want every Brooklynite, every New Yorker to feel that Barclays Center is his or her arena.  And for visitors from all over the world to feel welcome.”

“There has been plenty good to come out of Prokhorov’s buying the team and moving it to Brooklyn,” said Appleman. “His willingness to foot the bill for the team’s expensive reinvention… was many things at once; brazen, creative… Wondering what Prokhorov will do, or green light, remains interesting.”

Appleman wonders, however, whether Prokhorov’s lavish spending taints the purity of building a core group of professional basketball players that fans can root for year-in and year-out.

“While the NBA will undoubtedly thrive in Brooklyn as a business in the future, it would be nice to see Prokhorov and his team take more of a proactive role in shifting the organization’s philosophy from business-runs-basketball to basketball-runs-business, although that might be too much to ask of a billion-dollar entity in the corporate sphere,” Appleman said.

After the Nets lost to the Miami Heat during the 2014 Playoffs, some key talent signed elsewhere, including superstar Paul Pierce who left for the Washington Wizards. After one season with the Nets, Head Coach Jason Kidd signed with the Milwaukee Bucks. New Nets head coach Lionel Hollins admires Prokhorov’s “competitive spirit.”

“The resources he has and his competitive spirit, and his willingness to spend some of those resources to help us put the best product we can on the court,” Hollins said during a radio interview in July. “Being in New York, which is one of the largest markets, and having the ability to entice and attract free agents, and generate revenue to make an owner want to spend money, is all what is necessary to win. I don’t think you can go out and buy a championship. I think it has to be earned on the court, but it does help you get assets the can contribute to that winning.”

Prokhorov’s stature has only added to the Brooklyn Nets’ luster. Russian Heritage Nights have already been featured at home games, as well as zany YouTube clips by players learning Russian words during basketball practice. When he bought the team in 2010, Prokhorov said: "The approval will give the NBA a greater global reach and bring a multitude of new fans to the game of basketball. For those who are already fans of the Nets and the NBA, I intend to give you plenty to cheer about.”

“We very much want, not only preseason games, but official season games in Moscow,” said Pavlova. “We firmly believe that the NBA’s future is a global one.” The Nets played two exhibition games in China before the season began, and the Barclays Center will co-host –with Madison Square Garden- the upcoming 2015 NBA All Star Weekend in February.

In the weeks leading up to the season opener, the blogosphere was abuzz with news that Prokhorov was in negotiations to sell the Nets to Guggenheim Sports and Entertainment.

Nets' General Manager Billy King tried to dispel the rumors that Prokhorov was planning to say “nyet” to the Nets. "We'll put it to rest. I think it’s been said: [Mikhail Prokhorov’s] not selling... I think we’re spending pretty good this year... I don’t think anything has changed in his mind-set. He hasn’t wavered in pursuit of what he wants. Our goal is to still try to win a championship. We’re not taking steps back. We’re trying to build a team that’s going to win," King said, according to website Nets Daily.

However, the website also reported that Prokhorov "wants to combine his Brooklyn assets - a majority interest in the Nets and minority in Barclays Center - with those of Guggenheim Sports and Entertainment, a newly formed partnership that includes investors with significant stake in the Dodgers." According to NetsDaily.com, there are "ongoing discussions" between the two sides.