Back to reality: Sochi left to itself as sporting show moves on 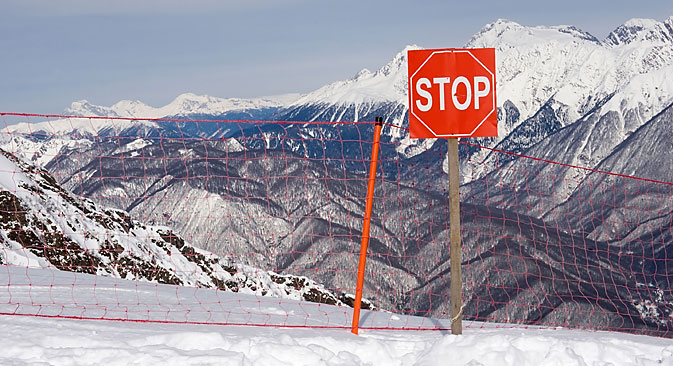 Sochi was the center of the winter sports world in February, but this season will be a very different story, as the focus of the sporting calendar shifts to other cities in Russia. Have the Winter Olympics organizers left a substantial enough legacy to guarantee the city’s place as one of the country’s key venues for winter sports? James Ellingworth takes stock.

It’s been a long time since Sochi had a quiet winter.

After the city won the right to host the Winter Olympics in 2007, the peace of the Black Sea resort and the neighboring Caucasus Mountains was shattered by a vast construction program.

A cluster of high-tech ice sports venues rose out of a marsh by the sea, while above, new ski resorts clung to the slopes.

Then in 2012, there came the first test events. Sochi was added to the calendars of every major winter sport, so the best athletes could compete there and point out any flaws. Finally, in February, there was the festival of this year’s Winter Olympics.

This winter, there will be almost nothing.

Sochi will host just a single major championship event across the seven Winter Olympic sports, when the continent’s top lugers arrive in February to contest the European championships.

Of course, you can’t host the Olympics every year. Indeed, much of the attraction of hosting the Games is in its scarcity – Russia had a 34-year wait between Moscow 1980 and this year’s Sochi Olympics, while Britain hadn’t held the Games in 64 years before London 2012.

It’s also unusual for a former Winter Olympic host to remain a fixture on the calendar for every winter sport. After all, no one place is perfectly suited to hosting them all. Sochi’s probably a little warm to hold regular Alpine skiing competitions, for example, and rather too remote to attract big crowds outside the Olympics in sports where Russia isn’t very strong.

Sochi’s Olympic organizers took account of that in their plans – the speed skating arena is to be converted into an exhibition center, for example, while the freestyle skiing venue in the mountains was so temporary, it had already been dismantled two weeks after the closing ceremony.

Still, it would be a great shame for Sochi to disappear as a regular host of winter sports events.

This year, the issue isn’t that Russia isn’t on the calendar. It is, but Sochi isn’t. Biathlon and cross-country skiing, both major sports in Russia if not in Britain and North America, still have World Cup rounds, but they’re taking place in little-known Khanty-Mansiysk and Rybinsk instead.

That’s not a coincidence – these places may not be world-famous but they have passionate local fans. Not everyone could get tickets for Sochi, so allowing other Russian venues to host events a few months after the Olympics is probably wise.

However, the crucial point will come in two or three years. If Sochi is not hosting regular winter sports World Cup events by then, it runs the risk of dropping off the radar. Also crucial, at least for snow sports, will be how Sochi develops as a winter sports resort.

If Sochi’s slopes are popular it will be easier for organizers to attract fans from abroad, making the events more economically viable. Come to watch the stars of skiing, stay for a run on the Sochi pistes – not a bad slogan.

Sochi’s Olympic legacy isn’t only about the mountains. Indeed, its biggest event in the first year after the Winter Olympics isn’t a winter event at all. Hosting Formula One’s first Russian Grand Prix last month brought tens of thousands of fans to Sochi and showcased the former Olympic venues around the track, though it’s not yet clear if it was profitable.

Meanwhile, the main Olympic hockey arena, the Bolshoy Ice Dome, has become a packed home venue for local team HK Sochi, which began competing in the Kontinental Hockey League as part of the Olympic legacy.

Giving the lie to a widespread Russian belief that the country’s warm southern cities would never take hockey to heart, the club is attracting up to 10,000 fans for games against the league’s top teams. That may not be huge by NHL standards, but it’s well above the average KHL attendance.

Sochi has also succeeded in hosting hockey’s Channel One Cup, a tournament pitting together the national sides of Russia, Finland, Sweden and the Czech Republic. It’s not on the radar for most North American fans – after all, no NHL players take part – but it’s a big deal for Russians, its traditional December date making it something of a pre-New Year ritual. Allowing the tournament to leave Moscow for the first time ever suggests there’s real desire among the sport’s bosses to turn Sochi into a hockey town.

Still, despite all that, Sochi will still feel a little empty, as will Russian sportswriters’ schedules in a winter devoid of constant flights to and from Sochi. Over the last few years, what with press conferences on Olympic preparations, test events and finally the Games themselves, most sportswriters based in Russia, myself included, often had the feeling they were spending more of their lives in Sochi hotel rooms than at home.

As the Olympic host city tries to find its niche in world sport, it’s a brave new world, both for my diary and for Sochi.