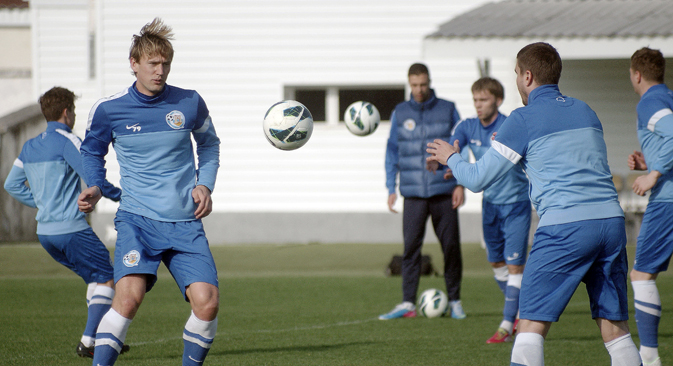 This picture taken on March 26, 2014 in Sevastopol shows players of the FC Sevastopol football club during a training session. Source: AFP / East News

Following its controversial referendum on accession to the Russian Federation, Crimea has been relegated to an uncertain and isolated position on the world stage. UEFA’s decision to ban Crimean soccer teams from participation in the Russian League pushes this isolation further by hitting the common man where it really hurts – his local club.

Back in February, armed groups of Crimean citizens, together with certain “little green men” of more dubious local origins, captured a number of local government offices and Ukrainian military installations. After an explosive period, tempers, thankfully, cooled; since the referendum in March, life on the peninsula has become much quieter. Too quiet, in fact, with Ukrainian holidaymakers largely shunning the resort towns which generate most of the region’s income.

Yet on Dec. 13 a few hundred citizens of Crimea’s largest city, Sevastopol, were back on the barricades, this time storming their local stadium, the SKS Arena. The supporters of the SKChF Sevastopol soccer club were protesting a Dec. 4 decision by UEFA’s Executive Committee in which three Crimean soccer teams, TSK Simferopol, SKChF Sevastopol and Zhemchuzhina Yalta, will soon be banned from participation in the Russian League.

The ban, which comes into force on Jan. 1, 2015, follows a letter of complaint sent earlier in the year to FIFA and UEFA by Ukraine Football Federation president Anatoly Konkov, asking the international sporting bodies to punish the Russian Football Union for unlawfully ‘annexing’ the Crimean clubs. The clubs had previously played in Ukraine’s first division, but following the referendum were admitted into Russia’s Third Division.

At first glance, UEFA’s move seems to fit into a trend of attempts to isolate Crimea and punish the region for its ‘decision’ to break away from Ukraine. On the international stage, none of the G7 states recognise the legality of the referendum which supposedly made Crimea a subject of the Russian Federation.

While it is unlikely that many in Crimea have lost sleep over such abstract legal disputes, the abstract has a way of becoming very real where the future of a favorite local soccer team is concerned. In the short term at least, the ire of UEFA is likely to be more keenly felt in the region than that of the EU.

This is the same logic that Michael Fuchs, an influential Christian Democrat in the Bundestag, recently invoked when telling the German publication Handelsblatt Online that stripping Russia of its right to host the World Cup would create a much greater impact than that achieved by economic sanctions. Politics has always encroached on sport, but in 2014 it was sometimes difficult to see where the one ended and the other began. Both the World Cup in Brazil and, particularly, the Winter Olympics in Sochi, were highly politicized events.

Many in Sevastopol have interpreted UEFA’s decision to ban Crimean teams from participation in the Russian League as a further example of this kind of political interference. Thus placards held by the participants of the Dec. 13 protest bore slogans such as “football without politics!” and “UEFA, FIFA – don’t be puppets!”

Given the extent to which Western politicians and journalists used the Sochi Olympics as a vehicle for ‘politics by other means’, slogans such as these are understandable. Many Russians frequently complain of unfair and hypocritical treatment by Western governments and newsrooms, and although this prickliness is sometimes infuriatingly misplaced, there was ample justification for such allegations over Sochi. After all, few world leaders were prepared to incur the penalties of boycotting the Beijing Olympics in 2008, despite China’s far worse record on human rights abuses.

Will Russian football fans pay for conflict in Ukraine?

Furthermore, it is easy to sympathize with the organisers of the protest in Sevastopol. Russian Sports Minister Vitaly Mutko summed up this exasperation during an interview with the Rossiya 24 TV channel on Dec. 4: “Where are they supposed to play? They can't play in Ukraine and they can't play in Russia. What are football fans and football supposed to do?”

It would seem that with the Crimean economy in freefall, many locals have taken to soccer as a crutch to help them through a difficult period. Is it then fair for UEFA to take away this consolation by, in Mutko’s words, “killing professional soccer” in the region?

A cynic might wonder how much professional soccer there is to kill on the Black Sea peninsula. SKChF Sevastopol and Zhemchuzhina Yalta are currently at the bottom of their division. TSK Simferopol have shown greater promise, but even before the ban was announced looked unlikely to perform well enough to earn promotion. Such sniping would, however, be beside the point: All teams have to start somewhere, and how are the Crimean clubs expected to improve if they are deprived of the participation and potential revenues of Russian League soccer?

Yet while there are considerable grounds for sympathizing with the beleaguered Sevastopol supporters, ultimately there is little that can be done about the situation. And while, given recent history, it is understandable that many soccer supporters believe political pressure to be behind UEFA’s decision, in this case they are almost certainly wrong.

UEFA has a clearly worded set of statutes that bars clubs from switching countries without the agreement of both national soccer federations. These rules have been in place for 60 years, and their application in this case would seem unequivocal. According to the World Soccer news agency, the Russian Football Union claims that the clubs are all newly formed entities unconnected with the old teams that played in the Ukrainian league.

Given that the rapid severing of ties with Ukraine has led to Crimea becoming, according to a recent Bloomberg article, a “legal twilight zone,” this is perhaps not as childishly bad an attempt at subterfuge as it first seems. Yet, as adults, UEFA are perfectly within their rights to ignore it.

Vasily Mutko knows this perfectly well, admitting in the Rossiya 24 interview that the UEFA charter is clear on this matter. The deputy chief of Russia’s Football Union, Nikita Simonyan, also recently told the R-Sport news agency that “we cannot ignore UEFA and FIFA decisions.” It remains to be seen whether the Russian government will make good on its promises to support football in Crimea with funds from Moscow. Either way, football is the latest addition to the long list of public goods that face a very uncertain future in Russia’s newest federal subject.